In the film, he channels his relationship angst into something hopeful: “I was like, ‘Why is the fictional version of me happier than I am?’”

“Until very recently, if Hollywood was willing to put a gay character in anything, it was often to be some version of a live-action cartoon,” Billy Eichner said.Credit…Ryan Pfluger for The New York Times

When he was still figuring out who he was as a gay man, Billy Eichner found himself at the movies. As a college student in Chicago, he caught “Jeffrey” and “Billy’s Hollywood Screen Kiss” at the Music Box. Later, after a move to New York, Eichner watched films like “All Over the Guy,” “The Broken Hearts Club,” and “Another Gay Movie” at the Quad.

Now it’s Eichner who gets to star in one of those stories. In “Bros,” which Universal is releasing in theaters on Friday, Eichner plays Bobby Leiber, a cynical Manhattanite who is surprised to find himself falling for Aaron (Luke Macfarlane), an affable jock. With most romantic comedies, the question is whether the central couple will ever get together, but these modern gay men quickly tumble into bed with each other (and sometimes with guest stars). Here, the conflict arises from whether they’ll actually stay together, since Aaron can be aloof and Bobby has never dated someone who’s such a … well, bro.

Though Eichner became famous for loudly haranguing passers-by about pop culture on his series “Billy on the Street,” in real life, the 44-year-old comic actor is low-key and thoughtful. He hopes that “Bros,” which he co-wrote with the director Nicholas Stoller (“Forgetting Sarah Marshall”), will demonstrate that he’s capable of much more than just bellowing.

“I think until very recently, if Hollywood was willing to put a gay character in anything, it was often to be some version of a live-action cartoon,” Eichner told me recently over dinner in Los Angeles. “But with ‘Bros,’ one of the things that excites me the most about it is I get to be a real, multidimensional person.”

Here are edited excerpts from our conversation. 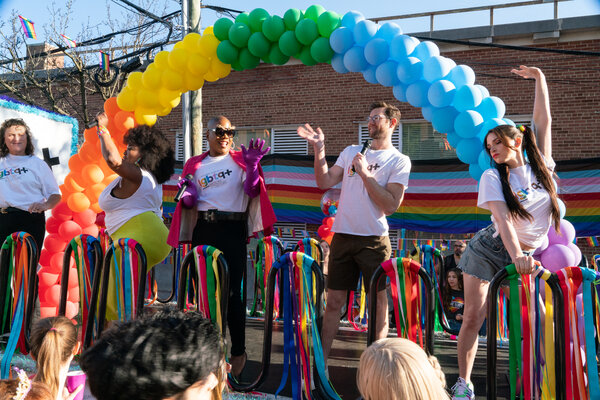 At what point did you decide to call this film “Bros”?

Very early on. One of the initial inspirations for the movie was this “Billy on the Street” segment I did with Jason Sudeikis called the “Bro Lightning Round.” where I dropped my normal “Billy on the Street” persona and did a different character. It was this very bro-y guy, and I would ask [a passer-by], “Hey bro, is masculinity a prison?” and the guy would say, “Yes,” and we’d all cheer. A gay friend of mine said to me, “You were kind of hot in that segment, when you talked like that. You should dress like that more often.” He was half-joking but half-not.

Inside every joke, there’s a kernel of truth.

One hundred percent, and I could tell. I said to him, “Are you saying I should have a completely different voice and dress like a completely different person in order to seem sexually attractive to you?” I always thought there was something there to further explore about gay men, at least those of my generation — I can’t speak to the younger ones, I don’t think they’re as focused on this issue of masculinity. But I told Nick that anecdote, and that’s when the idea of calling the movie “Bros” came to me. I liked the irony of it, that this big mainstream gay rom-com would be called “Bros,” but also when people see the movie, they’ll realize it actually is tied into one of the themes.

How would you define that theme?

That the gay male community, or at least parts of it, put a certain type of jocky, all-American masculinity on a pedestal. I think that for gay men of my generation, it was less of an issue to simply be gay — many of us were OK with that, for the most part — but we wanted to be masculine, and we were attracted to this very old-fashioned sense of masculinity. And although things are definitely changing for the better, a lot of that stuff is still ingrained in us.

Complicated. When I was in my 20s, you would go to the gay bar with your friends and we always talked about how we’re gay, but we’re not that gay. I remember my father saying that to me as if that was a good thing.