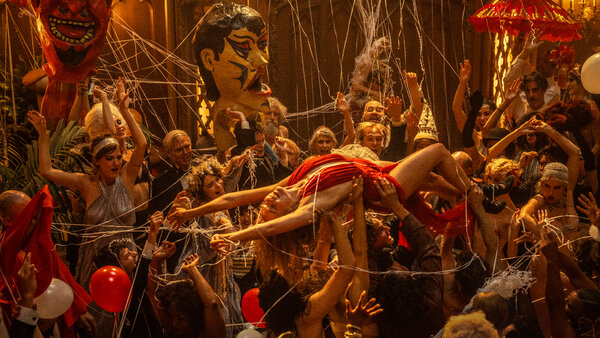 The best that can be said about Damien Chazelle’s “Babylon” is that there are still big Hollywood studios like Paramount around to spend wads of cash on self-flattering indulgences. It’s perversely comforting. Despite all the real and imagined existential hurdles that the movie business is facing, its agonies over the future of theatrical exhibition and of streaming, the industry holds fast to the belief that audiences will turn out to watch an ode to its favorite subject: itself. So kudos to Paramount, which also released this year’s box-office titleholder “Top Gun: Maverick” — at the very least, “Babylon” is further proof of life.

It’s also a bloated folly, which is in keeping with an industry that has a habit of supersizing itself in times of crisis. To tell his tale, Chazelle has turned back the clock to the years right before the business adapted synchronous sound as the industry standard. In basic outline, he frames this period largely as one of unbridled personal freedom, a time in which film folk partied hard, guzzling rivers of booze while snorting Sahara-sized dunes of drugs and joylessly writhing to jazzy squalling. The next morning, the freewheeling revelers then stumbled into the blazing California sun for another day of filmmaking.

Written by Chazelle, “Babylon” centers on three industry types — a powerful star, a soon-to-be minted starlet and an up-and-coming executive — whose lives first intersect in a frenzied blowout crowded with attendees thrashing wildly, their mouths, arms, legs, breasts and assorted other bits flapping in a simulacrum of ecstasy. The star is Jack Conrad (Pitt in usual smooth form), an M.G.M. headliner with a dashing mustache, a string of hits and a romantic life that, despite his boozing, is as robust as his health. The movie’s humor — and Chazelle’s amused approach — is signaled when Jack tells a flirty waitress to bring him multiple drinks. He slurps buckets, and then gets it energetically on with the server.

Like the powder nasally vacuumed by another partyer, a grasping would-be star, Nellie LaRoy (a badly used Margot Robbie), Jack’s drinking is, for Chazelle, an emblem of the unfettered spirit of the age before the fun was spoiled by, well, it’s unclear by whom, since the only serious villain is a gangster played by a persuasively repellent Tobey Maguire. (Wall Street, which has done far more damage to the movies than any entity, is conspicuously M.I.A.) Jack and Nellie’s ability to perform no matter what, on camera and off, are among their most defining traits, near-super powers as well as a steady source of strained comedy.

Much of the first two hours restively bounces from Jack to Nellie and Manny Torres (Diego Calva), a doe-eyed Mexican naïf whom Jack hires as an assistant. A fast, smart problem solver and a total mensch, Manny soon assumes greater responsibility and becomes a studio executive, a straighter trajectory than either Jack or Nellie’s hairpin roads. Manny is an outlier, an immigrant of color in a predominantly white business, but he’s a survivor, too, open to change and highly adaptable. Like Calva, Manny is appealing, even if the character is preposterously nice for a clichéd Hollywood striver. But it’s never really clear what makes him run and mostly he functions as a proxy for the audience, a gaga witness to the looniness.

Compared to the larger-than-life, at times cartoonish, more physically demonstrative performances delivered by Pitt and especially Robbie, Calva is relatively tamped down and reactive, which brings his turn closer to contemporary notions of realism. These differences add complexity and much-needed rhythm changes. Similarly to his characters, Chazelle has embraced excess as a guiding principle in “Babylon, and like his film “La La Land,” this one shifts between intimate interludes and elaborate set pieces, one difference being that Chazelle now has a heftier budget and is eager to show off his new toys. At the inaugural bacchanal, the camera doesn’t soar; it darts and swoops like a coked-up hummingbird.

Despite the relentless churn on set and after hours, the movie is strangely juiceless. I don’t simply mean that it’s unsexy (which it is), but that there’s so little life in the movie, despite all the frantic action. There isn’t much going on other than the spectacle of its busily spinning parts, which might be tolerable if the first two hours weren’t so unrelievedly unmodulated, with everything synced to the same monotonous, accelerated pace. This hyperventilated quality initially serves the story and Chazelle’s concept of the era’s delirious excess, but the lack of modulation rapidly becomes enervating. After a while, it feels punishing.

There’s something juvenile and paradoxically puritanical about Chazelle’s focus on the characters’ drinking and drugging and hard-living, and not just because their exertions don’t seem very fun. They work and party, hit marks and cut loose, follow directions and run wild; you see their technique, stamina, flubs, upstaging tricks and power moves, as well as their bloodshot eyes. Jack, Nellie and Manny seem to like making films, or at least they like the perks, and each speaks of the magic (or whatever) of movies. But their offscreen habits aren’t interesting — people do drugs and have sex, big whoop — and the real scandal is that there’s nothing special about their films, which Chazelle makes look silly, slapdash and ugly.

The shift to sync sound was cataclysmic for the industry and fascinating, though in ways that aren’t evident here, partly because Chazelle isn’t terribly invested in historical accuracy. Instead, with “Babylon” he has whipped up a Hollywood counter history that focuses on the era’s putative excesses and rebuts (and luxuriates in) the industry’s carefully sanitized, high-minded profile. This kind of revisionist take isn’t new; the movies love revisiting and lampooning themselves. Ryan Murphy took a different tack in his Netflix series “Hollywood,” which wishfully rewrites the past so that everyone who the industry marginalized or excluded — men and women of color, gay and straight — gets to triumph.

Chazelle doesn’t bother with positive role models or social uplift. Mostly, he is entranced by what Hollywood tried to keep hidden, particularly in the wake of some highly publicized scandals in the 1920s. To deflect attention from the federal government and the censorship threat it posed, the industry began polishing its image and strictly enforcing its self-drafted Production Code (no extramarital sex, etc.). In public, the studios and their fixers promoted stars as ideals while quietly facilitating abortions, hiding affairs and keeping performers deep in the closet — all fodder for the veiled innuendo of gossip columnists and tabloid magazines.

There are moments in “Babylon,” say, in one of its set pieces or in Nellie’s skillfully forced tears, when you see what it might have been if Chazelle had paid as much attention to the era’s films, their pleasure and beauty, as to its lurid stories. He’s crammed a lot in, including Irving Thalberg (Max Minghella), the legendary M.G.M. producer who butchered Erich von Stroheim’s 1924 masterpiece “Greed.” A clownish Stroheim-esque type (an uncredited Spike Jonze) also pops up in “Babylon,” and both he and the epic he’s directing are played for laughs. Here, as throughout this disappointing movie, what’s missing is the one thing that defined the silent era at its greatest and to which Chazelle remains bafflingly oblivious: its art.