In an episode of Antiques Roadshow, host Fiona Bruce took viewers to Compton Verney in Warwickshire. A number of hopeful guests turned up for the filming of the BBC show with their relics to see if any of their items were of any value. During the event, one guest brought expert John Benjamin an item of jewellery that had been in her family for decades and was shocked to learn it could fetch up to £8,000.

Before he began the valuation of the guest’s item, he noticed how “pretty” the jewellery box was it came in.

“It doesn’t disappoint does it?” he began. “When you open up the lid it reveals this absolutely elegant brooch, fashioned as three ducks in flight.

“Well, it seems a bit unfair to call them ducks, we will call them stylised mallards in flight.

“Now, this for me, is an elegant, beautiful and well-constructed piece of jewellery but before I tell you a little bit about it, you must tell me what you know about it?” 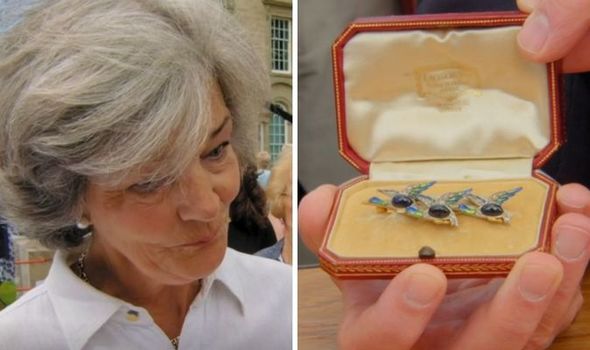 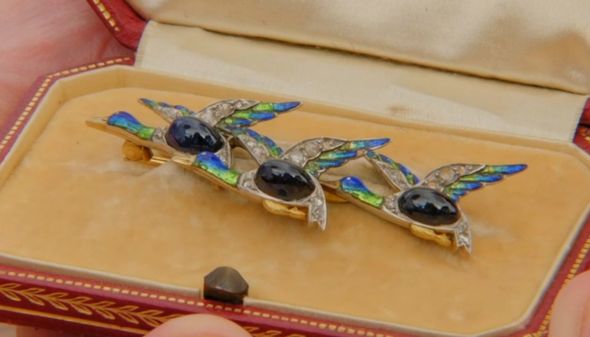 The woman proceeded to explain to John that she was given the brooch by her father-in-law in the 1970s and it had been passed down to him by his aunt.

“Everything he did or said or loved, it was done with great style,” she recalled.

“As a result of loving him so much, it means an enormous amount to me this brooch.”

She went on to add the brooch was more than an item of jewellery to her as she explained her father-in-law was “very special”. 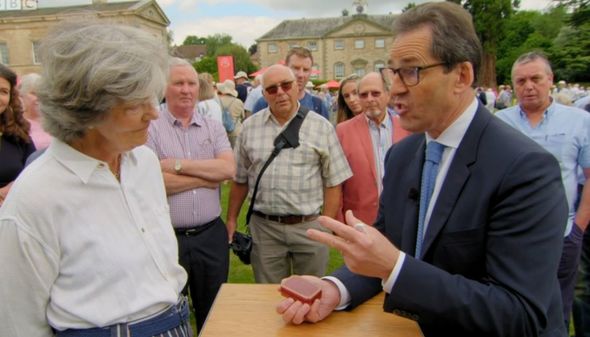 Speaking about the brooch, John continued: “Well, he did have exquisite taste, he had great knowledge I think as he’s given you something that is not just a brooch, it is a representative of the time it was made, which with this naturalistic design it was probably made around about 1910.

“You can see it’s got these three large blue stones which I am sure you know are sapphires.

“The wings and the body are set with little colourless stones and then the winged tips and the head are enamelled in blue and translucent green.

“There’s one feature about this brooch which sets it apart from just another novelty piece and that is, of course, the name. It is in this case by the name Lacloche.”

“A French manufacturer, highly sought because they make this sort of beautiful jewellery,” he added.

“They were very successful and a big company.

“I don’t know whether you know this, but when you lift up the box and have a look, can you just see on the edge of the frame there’s a little tiny inscription, Paris, Lacloche Freres.

“It’s minute but that is absolutely crucial because if it was only in a Lacloche case without being signed, the value would be significantly less.”

John went on to add that because the brooch was signed, it made it a lot more desirable.

“I think the appeal of this would be universal,” he told the guest.

As he revealed his valuation, the guest took a moment to respond as she appeared to be lost for words before simply replying: “Thank you.”

Antiques Roadshow is available to watch on the BBC iPlayer.