A mysterious luminous glow visible just before dawn, known as the zodiacal light, could be the result of tiny particles of dust being shed from Mars, NASA claims.

The zodiacal light is a faint column of light extending up from the horizon – it is sunlight reflected towards Earth by a cloud of dust particles in orbit around the sun.

The NASA Juno probe, which was launched in 2011 to orbit Jupiter, serendipitously detected dust particles slamming into the spacecraft on the way aroundthe gas giant.

The impacts of the dust particles provided important clues to the origin and orbital evolution of the dust, resolving some mysterious variations of the zodiacal light.

The Juno scientists claim Mars is the source of this debris as the particles are in a nearly circular orbit around the sun at a point in space similar to the orbit of Mars.

Mars is also one of the dustiest planets in the solar system, although the NASA team can’t explain how so much dust escaped the grip of the Martian gravity, but predict it happens during dust storms that cover the entire Red Planet. 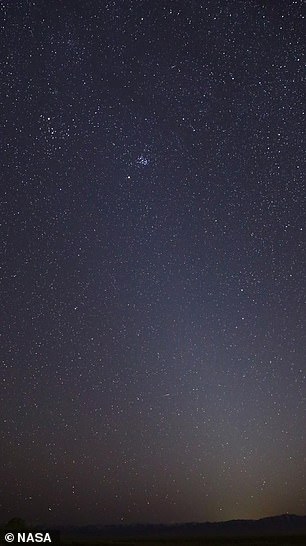 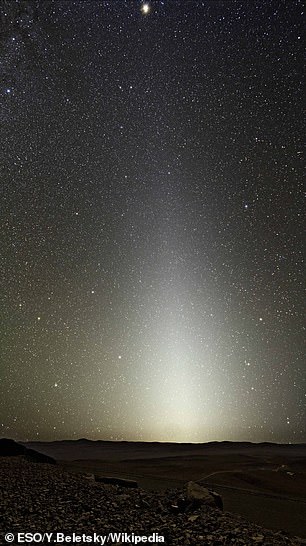 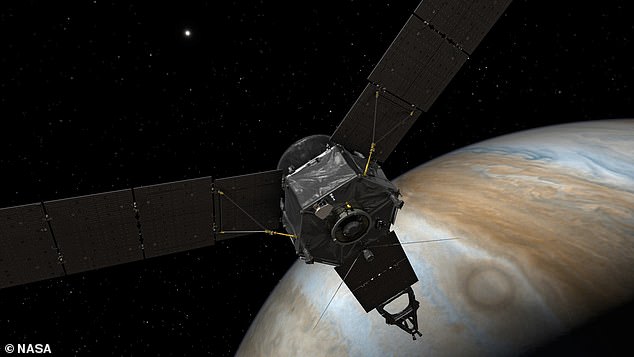 The NASA Juno probe, which was launched in 2011 to orbit Jupiter, serendipitously detected dust particles slamming into the spacecraft on the way to the gas giant

ZODIACAL LIGHT: A GLOW ON THE HORIZON

Zodiacal light, also known as a false dawn, is a faint white glow visible after dusk or before dawn near the horizon. 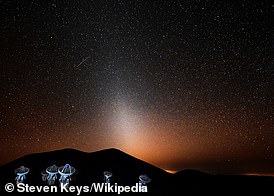 Zodiacal light, or false dawn, appears before sunrise and after sunset

It appears to extend from the direction of the sun, along the zodiac and straddling the ecliptic.

The brightness decreases with the distance from the sun.

It can span the entire sky and contributes to the natural light on a clear moonless night.

It was linked to reflection from interplanetary dust, with many astronomers predicting it was the result of asteroids and comets.

However, NASA scientists found it was the result of dust being ejected into space from Mars.

Look up to the night sky just before dawn, or after dusk, and you might see a faint column of light extending up from the horizon – this is sunlight reflecting from a cloud of tiny dust particles.

Before this study, by NASA and the Technical University of Denmark, astronomers thought the dust came into the inner solar system from asteroids and comets venturing in from afar.

This changed when the NASA Juno spacecraft passed through a cloud of dust as it ventured through the Martian orbit on the way to Jupiter.

An instrument aboard the Juno spacecraft serendipitously detected dust particles slamming into the probe.

The impacts provided important clues to the origin and orbital evolution of the dust, suggesting it may come from Mars, rather than a comet or asteroid moving in from outer parts of the solar system.

Though their discovery has big implications, the scientists who spent years studying cosmic debris did not set out to do so.

‘I never thought we’d be looking for interplanetary dust,’ said John Leif Jørgensen, a professor at the Technical University of Denmark.

Jørgensen designed the four star trackers that are part of Juno’s magnetometer – a device that measures magnetic fields.

These onboard cameras snap photos of the sky every quarter of a second to determine Juno’s orientation in space.

It determined the orientation by recognising star patterns in the images it was taking – an engineering task essential to the magnetometer’s accuracy.

However, the team also hoped the cameras might catch sight of an undiscovered comet so one was programmed to report things that appeared in multiple consecutive images but not listed in the catalogue of known celestial objects. 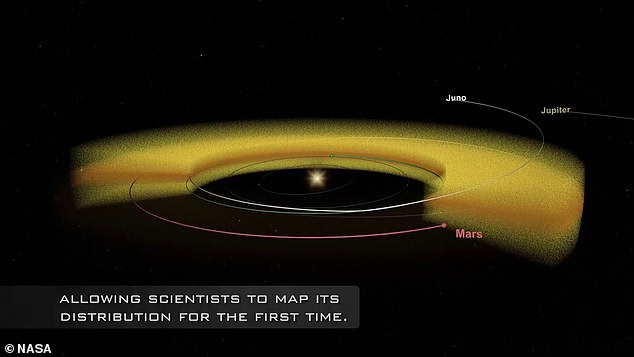 NASA was able to map the distribution of the dust cloud that makes up the zodiacal light, finding it is between the orbits of Earth and the Asteroid Belt

It was this camera that first reported sight of the mysterious cloud of dust – sending back images of thousands of unidentifiable objects.

They were streaks that appeared then disappeared without warning or explanation.

Jørgensen was baffled by the strange streaks shown in the images from that one camera, saying ‘we were looking at the images and saying ‘what can this be?’.’

‘We thought, ‘Something is really wrong,’ Jørgensen said. ‘The images looked like someone was shaking a dusty tablecloth out their window.’ 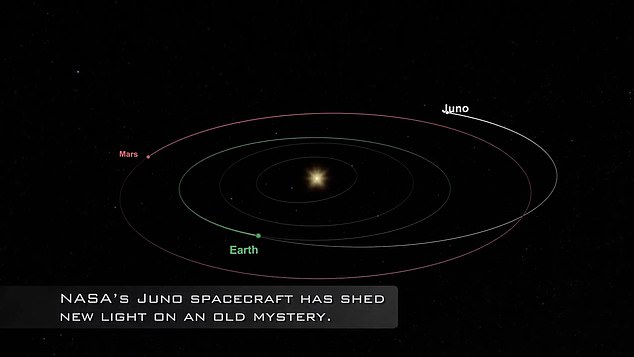 They considered a number of plausible and implausible causes for the streaks and even the possibility that the camera caught a leaking fuel tank on Juno.

They calculated the size and velocity of the objects in the images and realised they were tiny grains of dust smashing into the spacecraft.

They were hitting Juno at about 10,000 miles per hour and even chipping off tiny pieces of Juno due to the sheer velocity of the impacts.

‘Even though we’re talking about objects with only a tiny bit of mass, they pack a mean punch,’ said Jack Connerney, Juno magnetometer lead.

The debris hitting the sides of the spacecraft came from the expansive solar panels on the side of the probe, making them the ‘most sensitive unintended dust detector ever built,’ according to NASA. 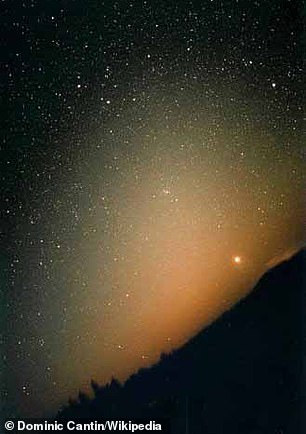 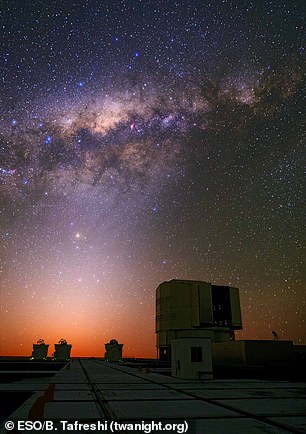 The impacts of the dust particles provided important clues to the origin and orbital evolution of the dust, resolving some mysterious variations of the zodiacal light 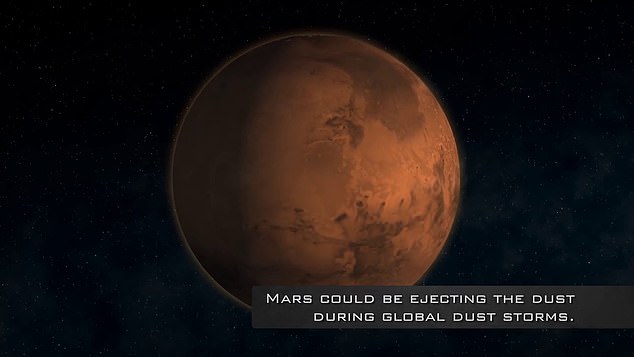 NASA scientists don’t know exactly how the dust escaped the Martian atmosphere, but predict it happened during a planet-wide dust storm

The Zodiacal light is sunlight reflected by dust in the inner solar system.

Variations in the Zodiacal light with ecliptic latitude reveal discrete bands of dust orbiting near the ecliptic plane.

The Juno spacecraft, in transit from earth to Jupiter, recorded a sufficient number of impacts with this dust to characterise their distribution in space for the first time.

The radial distribution of the dust suggests it comes from Mars.

The outer orbit of the dust cloud is 2 AU – twice as far from the sun as the Earth and held by Jupiter’s gravity.

The inner orbit is the Earth, where the dust is sucked up by our gravity.

As it approaches Earth the dust reflects sunlight and appears as a column of light in the pre-dawn or post-dusk night sky.

‘Each piece we tracked records the impact of an interplanetary dust particle, allowing us to compile a distribution of dust along Juno’s path,’ Connerney said.

The majority of pieces hit the probe between Earth and the Asteroid belt – at about 2 astronomical units from the sun – 1 AU is the distance between the Earth and the sun.

Connerney and Jørgensen spotted gaps in the distribution of the dust particles related to the influence of Jupiter’s gravity.

Juno scientists determined that the dust cloud ends at Earth because Earth’s gravity sucks up all the dust that gets near it. ‘That’s the dust we see as zodiacal light,’ Jørgensen said, adding it ends just beyond Mars.

At that point, the scientists report, the influence of Jupiter’s gravity acts as a barrier, preventing dust particles from crossing from the inner solar system into deep space.

This same phenomenon, known as orbital resonance, also works the other way, where it blocks dust originating in deep space from passing into the inner system.

This dust barrier at either end suggest the particles are constrained to an almost circular orbit around the sun at around 2AU.

This is also roughly where Mars orbits the sun – at about 1.5 AU, which led the team to determine that the natural source of the dust had to be the Red Planete.

‘The distribution of dust that we measure better be consistent with the variation of zodiacal light that has been observed,’ Connerney said.

The researchers developed a computer model to predict the light reflected by the dust cloud, dispersed by gravitational interaction with Jupiter that scatters the dust into a thicker disk.

The scattering depends only on two quantities: the dust inclination to the ecliptic and its orbital eccentricity.

When the researchers plugged in the orbital elements of Mars, the distribution accurately predicted the telltale signature of the variation of zodiacal light near the ecliptic. 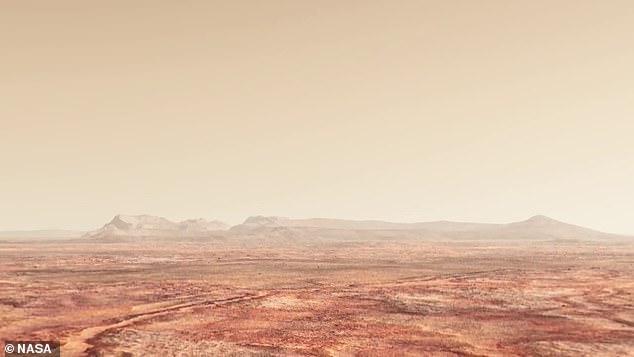 During the mammoth Martian dust storms the entire planet is covered in particles swept up from the soil. NASA says Mars is the dustiest planet in the solar system – as far as we know

‘That is, in my view, a confirmation that we know exactly how these particles are orbiting in our solar system,’ Connerney said, ‘and where they originate.’

While they now know the dust came from Mars, what the team couldn’t determine was ‘how’ it escaped Martian gravity, saying they’ll leave that to other scientists.

In the meantime, the researchers note that finding the true distribution and density of dust particles in the solar system will help engineers design spacecraft materials that can better withstand dust impacts.

The findings have been published in the journal JGR Planets.

The Juno probe reached Jupiter in 2016 after a five-year, 1.8 billion-mile journey from Earth

Following a successful braking manoeuvre, it entered into a long polar orbit flying to within 3,100 miles (5,000 km) of the planet’s swirling cloud tops.

The probe skimmed to within just 2,600 miles (4,200 km) of the planet’s clouds once a fortnight – too close to provide global coverage in a single image.

No previous spacecraft has orbited so close to Jupiter, although two others have been sent plunging to their destruction through its atmosphere.

The maelstrom of high energy particles travelling at nearly the speed of light is the harshest radiation environment in the Solar System.

To cope with the conditions, the spacecraft was protected with special radiation-hardened wiring and sensor shielding.

Its all-important ‘brain’ – the spacecraft’s flight computer – was housed in an armoured vault made of titanium and weighing almost 400 pounds (172kg).

The craft is expected to study the composition of the planet’s atmosphere until 2021.