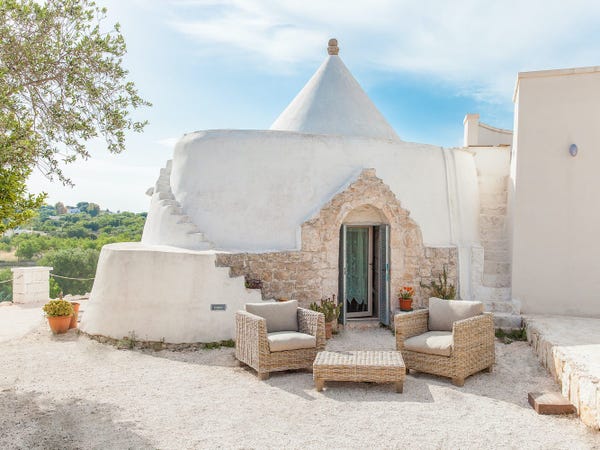 New Zealand has its Hobbit holes, Bali has treehouses, and Greece has cave rooms. And southern Italy is home to cone-shaped stone homes known as "trulli."

One such abode in the city of Ostuni, in Italy's Puglia region, is now available for you to rent on Airbnb, starting at $60 a night.

Despite looking like something out of a medieval fairy tale, the trullo has modern amenities.

According to the Airbnb listing, there's a huge bathroom, a fully equipped kitchenette, and a beautiful patio for enjoying a drink under the stars at night. There's also Wi-Fi should you need to get online.

Outside, there's an infinity pool to cool off in during the day, though bear in mind that you'll be sharing that with two other nearby properties, according to the Airbnb listing.

The tiny home is also said to have incredible views, surrounded by olive trees, almond trees, figs, and prickly pears that the trullo's owner encourages guests to "pick and eat" in the listing.

Trullo homes have an interesting history. The spiky, seashell-like structures are a common sight around Puglia, and their design dates back to the mid-14th century.

According to tourism site Italia, the limestone structures were built without any mortar and meant as temporary housing that could be dismantled quickly as "an efficient means to evade taxes on new settlements" for their inhabitants.

If you're considering travel to Italy, it's important to note that the European Union, of which Italy is a member, currently has a travel ban on US travelers in place. The list of countries banned from EU member states is being revisited every two weeks.

It's also worth noting that while the Centers for Disease Control and Prevention no longer advises against nonessential travel, it does warn that "travel increases your chance of getting and spreading COVID-19."