When “Never Rarely Sometimes Always” opened on March 13, the world was different. America was only just beginning to take the coronavirus seriously. Movie theaters hadn’t yet shuttered en masse. But even then, director Eliza Hittman was justifiably disappointed to see her film debut amid mounting global panic. “The impact that it might have on the release makes me really sad,” she told me that week.

Still, Hittman insisted that “Never Rarely Sometimes Always” — a   Sundance standout﻿ about a working-class teenager (newcomer Sidney Flanigan) trekking from rural Pennsylvania to New York City to obtain an abortion — was “not a streaming movie.” She wanted people to see it on a big screen, their attention undivided.

To her point, a drama this hushed and wrenching does not make for passive viewing. More importantly, small indie films count on word-of-mouth marketing to reach the mainstream. But since mid-March, studios have fast-tracked a handful of current and upcoming titles to video-on-demand services (e.g., iTunes, Amazon Prime Video and cable systems like Comcast and Spectrum), giving shut-ins access to “The Invisible Man,” “Birds of Prey,” “Trolls World Tour” and more when theaters can’t. Focus Features, the distributor behind “Never Rarely,” opted to take the same route, despite Hittman’s earlier preference.

Focus considered re-releasing it in July, Hittman said by phone on Friday, but no one knows whether life will be back to normal then. A VOD premiere is the right move these days, and she more or less agrees. The film, which deserves to be seen by the widest possible audience, would have gotten lost in the deluge of delayed movies once the COVID-19 pandemic passes.

“Because we’re living in such an open-ended nightmare and because we have states in the country that are trying to restrict access [to abortions], I think I’m just happy the film is out there for people to watch at this very vulnerable moment,” Hittman said. “I feel lucky that we had a burst of life before the world shut down. Obviously the film has increasing relevance in this current political moment.”

“Never Rarely Sometimes Always” marks Hittman’s third feature. Her work so far constitutes a triptych of social realism centered on adolescents. “It Felt Like Love” (2013) is about a shy high schooler (Gina Piersanti) courting a hard-edged older guy to seem hip, and “Beach Rats” (2017) won Hittman vast acclaim for its raw depiction of a closeted Brooklyn teen (Harris Dickinson) who scours the internet for adult men to hook up with. Using naturalistic scene-setting and intimate handheld camerawork, Hittman’s films have a vérité sensibility that’s complemented by subtle, much-needed specks of humor. “Never Rarely” is the best of the three, and the best of what indie cinema can achieve.

Hittman’s protagonist is Autumn, a taciturn 17-year-old musician with inattentive parents (Sharon Van Etten and Ryan Eggold) and a part-time gig at a grocery store managed by a creep (Drew Seltzer). When Autumn discovers she’s pregnant, she visits a local women’s clinic that turns out to be a front for anti-abortion propaganda. She’ll have to abort the baby herself ― a risky move at best ― or travel elsewhere for the procedure. Autumn’s loyal cousin (Talia Ryder, who’s set to appear in Steven Spielberg’s “West Side Story” remake) accompanies her to New York, where a Planned Parenthood counselor portrayed by a real-life social worker poses a series of sensitive questions about Autumn’s sexual history. Those queries are based on intake forms that Hittman discovered while doing research, and each has four available answers: never, rarely, sometimes or always.

Not once does the film resort to polemics about reproductive rights, instead trusting the audience to understand the broader implications surrounding Autumn’s experiences. That’s something Hittman sought from the beginning, even when it came to casting. She wanted her lead actor to be someone who grasped the story’s gravity without relying on the canned verbiage often used when talking about social issues.

Hittman met Flanigan several years ago through mutual friends, and she’d been eager to hire her ever since. When first approached about this opportunity, Flanigan said no, feeling too inexperienced for such complex material. She deals with anxiety and was nervous about the prospect of leaving home for so long. But Hittman, who is petite and has a compassionate demeanor, convinced Flanigan to reconsider. 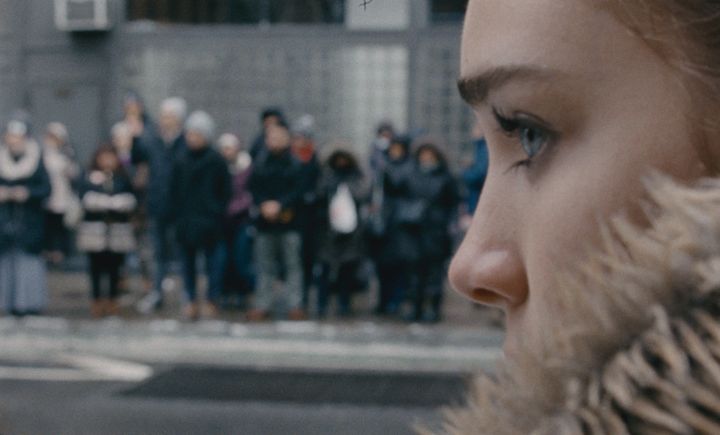 “I auditioned a lot of young actresses, and a lot of them came in the room and did really good auditions and they were really talented. But then when we would start to talk about the issues, I felt they came in with talking points that their mother had prepared them with,” Hittman explained during our initial conversation. “They were guarded and sheltered. People come in and they want to present themselves and then they want to tell you how much the story is important in the world. And Sidney and I just had a much more authentic, real conversation about the issues. I think that the character has seen things and been through things and there’s an inner complexity, and that’s a hard thing to find casting this movie.”

This was Flanigan’s first time acting, and she’s tasked with carrying the bulk of the narrative herself, often through revealing close-ups. It was Hittman’s script that convinced her to relent. Now 21, she’d been playing what she calls the “underground music scene” in upstate New York, never imagining a life that would take her to prestigious premieres at the Sundance and Berlin film festivals. The movie garnered jury prizes at both.

“This is obviously a really controversial topic, and there was a part of me that was a little nervous about some people giving a little backlash or just being hostile about it,” Flanigan said. “But then it just ended up everybody was so supportive and empathetic and appreciative. It gave me a lot of hope.”

“Never Rarely Sometimes Always” joins “Obvious Child,” “4 Months, 3 Weeks and 2 Days” and “Citizen Ruth” in the limited canon of first-class movies about abortion that neither sermonize nor minimize the harshest realities. Each takes a different tone ― particularly 1996′s “Ruth,” a biting, brilliant satire starring Laura Dern ― but they all chronicle women who need a support system to weather their distress. (There’s also a delicate abortion subplot in “Portrait of a Lady on Fire,” the beautiful French romance from 2019 that’s now streaming on Hulu.)

Despite avoiding overt politics itself, “Never Rarely” arrives on VOD at a fitting time. Amid the coronavirus self-isolation guidelines, several states have moved to classify abortion as a nonessential procedure, which would force women to journey farther to seek one at a time when travel is discouraged. In Texas, abortions have been banned except when necessary to preserve a patient’s life or health.

“I hope that the film speaks to women who might find themselves in similar situations as the main character,” Hittman said on Friday. “I think it’s unfortunate that people are using a global pandemic to play a political game with people’s lives.”