The world’s ocean currents are changing, particularly along Australia’s eastern seaboard and around Antarctica, creating more powerful eddies that could have far-reaching effects on what happens to the climate.

Australian researchers at the ARC Centre of Excellence for Climate Extremes made these findings using satellite data from 1993-2020 that can detect changes in ocean levels down to a few centimetres.

The Southern Ocean is changing the most, with the Antarctic Circumpolar Current strengthening about 5 per cent per decade over those years, according to the research published on Friday in Nature Climate Change. 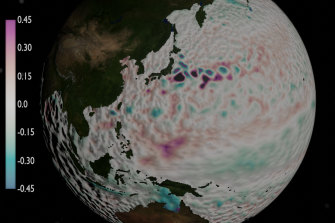 Nearly three decades of satellite data have given researchers information about long-term changes in difficult to measure ocean currents and eddies.Credit:ARC Centre of Excellence for Climate Extremes

The ocean gyres, which spin like cyclones in the atmosphere, range from 10 kilometres to 1000 kilometres in size, and were difficult to measure and track prior to the satellite era. They are important for mixing and transporting heat and nutrients, and for absorbing carbon.

“To see it change so much is quite shocking to me,” said Matthew England from the University of NSW, one of the paper’s authors. “It’s the first study that quantifies the long-term changes in eddies.”

Josué Martínez Moreno, a PhD candidate at the Australian National University and lead author of the report, said regions of the world’s oceans that were already “eddy rich are getting richer”.

“While we may have, say, 10 cyclones in the atmosphere [at any one time], we have in the order of 1000s of these coherent eddies in the ocean,” Mr Martínez Moreno said. “All these little things do matter a lot – more than we expect.”

The East Australian Current, which flows polewards from the equator, is among the so-called boundary currents showing the biggest change as it strengthens. That intensification increases the risk of marine heatwaves and coral bleaching, Mr Martínez Moreno said.

“The boundary currents’ intensity has increased and therefore that has resulted in more eddies or stronger ones,” said Andrew Hogg, a researcher at ANU and another of the paper’s authors. 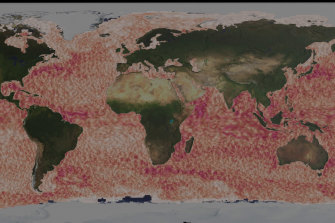 While the atmosphere may have in the order of 10 cyclones spinning at one time, the ocean can have thousands of smaller eddies.Credit: ARC Centre of Excellence for Climate Extremes

Cai Wenju, a senior climate researcher at the CSIRO, said the research was “a very nice analysis”, and so far, “mesoscale eddies are not well-resolved in climate models”.

He agreed with the researchers there was more to be done to understand what the changes to eddy fields would mean for oceanic and atmospheric processes.

“If anything, it will mean more uptake” of carbon and heat if eddies intensify, Dr Cai said.

If the oceans end up absorbing more heat and carbon from the atmosphere and moderating conditions for humans on land, the results won’t be good for marine ecosystems if they heat up faster and seawater becomes more acidic. Sea levels would also rise faster as warmer oceans expand.

“There is a bit of payback,” Professor England said.