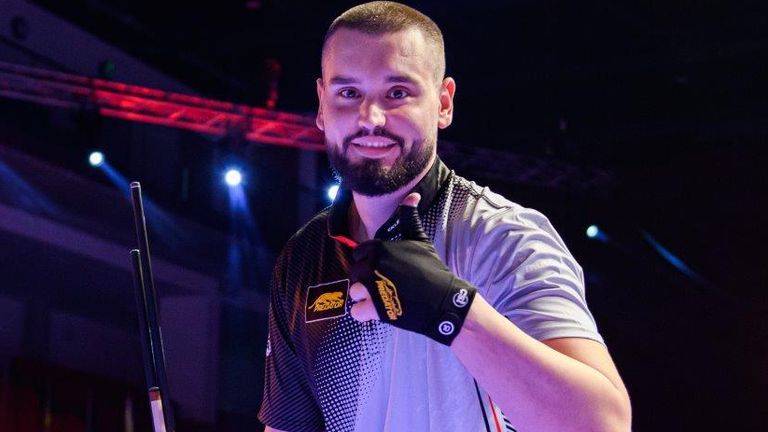 Eklent Kaci put in a commanding performance to blast his way into the World Pool Masters semi-finals with a 7-0 whitewash against Niels Feijen in Gibraltar.

In arguably the performance of the tournament so far, Kaci broke and ran four of his seven racks, and missed just one ball during a dominant performance against the Dutchman at the Europa Sports Complex.

“I feel great,” said Kaci. “I played a nearly perfect set; he missed a ball in the first rack and that was it. Even as players, we enjoy when we play perfect sets, it is why we practice so hard.

“If I don’t think I can go all the way, I wouldn’t even come here. I am looking good, feeling good, playing good. If I can break them good and get some rolls, we will see tomorrow.”

Fans will be BACK for the 2021 World Pool Championship 🤩

Tomorrow you'll be able to buy a ticket to see the Final Day in Milton Keynes on Thursday, June 10 🎟#WorldPoolChampionship pic.twitter.com/sOAmtBijHS

Earlier in the evening, Alexander Kazakis beat Australia’s Justin Sajich 7-3 and Shane van Boening booked his place in the quarter-finals with a 7-1 win over Fedor Gorst.

Kazakis will face Skyler Woodward in the quarter-finals in what will be a repeat of the 2019 semi-final which was won 8-1 by the Greek.

Woodward will be joined in the last-eight by Mosconi Cup team-mate Van Boening after the five-time US Open champion inflicting a heavy defeat on World Champion Gorst.

Van Boening played a brilliant match, denying his opponent too many opportunities, and will now face Masters debutant Max Lechner in the quarter-finals.

“I know how to win this tournament. I have to string three or four racks together and maybe I can win the tournament. Anything can happen in a short race.”

For those on the move, we will have the Snooker & Pool season covered via our website skysports.com/more-sports, our app for mobile devices, or our Twitter account @skysportspool for latest news and reports.