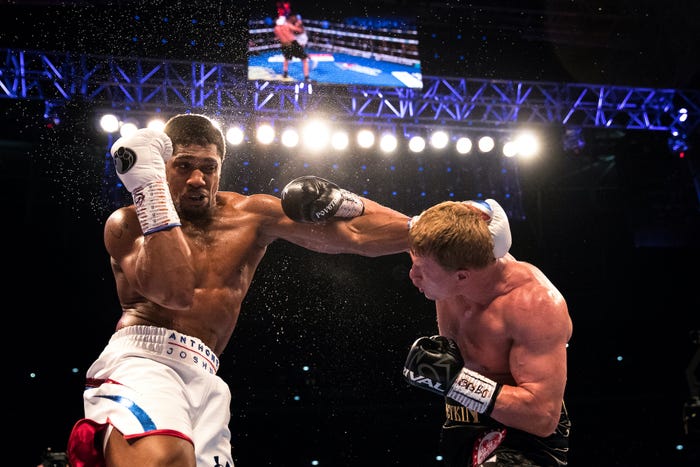 The unified world heavyweight boxing champion Anthony Joshua "could be taught some more stuff," according to the division's former ruler, Mike Tyson.

Joshua is the incumbent WBA, WBO, and IBF king in boxing's glamor weight class, but has faced criticisms for a porous defense.

After Joshua's up-and-down 11th round knockout win over Wladimir Klitschko in 2017, Floyd Mayweather met the British fighter in London and told him to his face that he was getting hit too often.

The American even invited him to his Las Vegas gym — the Mayweather Boxing Club — so he could improve his blocking, parrying, and his evasive skills at an establishment renowned for its focus on technique.

"You have to respect AJ," Mayweather told Fight Hype three years ago. "He showed that he had heart but … we want to tighten that defense up until it's real, real sharp, and real, real slick."

Since climbing off the deck to beat Klitschko, Joshua had to overcome a bloodied nose to stop Carlos Takam late in 2017, came-from-behind to defeat Alexander Povetkin the following year, and then lost his titles in a humiliating defeat to Andy Ruiz Jr. when he was beaten to the Madison Square Garden floor four times in 2019.

It took a champion's mindset to seek an immediate rematch and reclaim his titles, out-pointing Ruiz in Diriyah, Saudi Arabia, later that same year.

And it is perhaps because of that why Tyson regards Joshua as a legitimate titleholder, despite apparent weaknesses.

"I just think he's a big guy," he told ESPN this week. "It's hard to fight being that big. It's very difficult being that big and having to fight a smaller guy. That guy could learn some more. He could be taught some more stuff."

Not everybody believes Joshua has to significantly improve, though.

Klitschko told Insider last year that Joshua is "the complete athlete," adding: "He can dominate the division and he has all the capabilities [to do so]."

Mike Tyson: Deontay Wilder is 'great' and Tyson Fury is 'a monster'

The heavyweight division is lively at present as there are numerous big-name athletes vying for the No.1-rank in the division.

Tyson Fury, the WBC champion, is the consensus ruler having adopted a bold and risky strategy to not only defeat long-time rival Deontay Wilder in February, but knock him out in one of the most significant wins in the division's modern era.

Wilder is chasing a third fight, something which was contracted until the clause reportedly expired last month. It is a trilogy which Mike Tyson supports.

"This guy is great," Tyson said of Wilder. "Just keep on fighting. Fight him [Fury] again. Fight him a third time. Whenever you have an opportunity to fight for the title, he should fight."

However, he reserved the highest of praises for Fury himself.

"I think he's very good," Tyson said. "He looks like he's not intimidating, but he's really elusive, he really knows how to box. He's really smart, he's really difficult to hit, and he's 7-foot, damn near. He's a monster."