Hundreds of workers at a Woolworths liquor distribution centre in Melbourne’s west have walked off the job after a worker tested positive to COVID-19.

Work stopped on Monday morning after a cease work notice was issued at the giant Laverton North distribution centre, which supplies alcohol to Dan Murphy’s and other Woolworths chains. 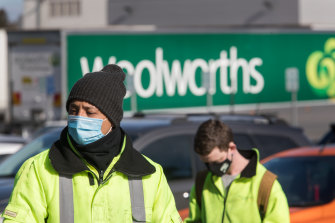 Workers at the Laverton North warehouse on Monday.Credit:Jason South

The site had remained open for a day after it was confirmed the worker had tested positive, the company confirmed.

“We have seen this a dozen times already. Each time the company tries to downplay the virus and keep operating there’s 50 or 60 COVID cases,” said United Workers Union official Matt Toner.

“The best plan Woolies can make is to go hard now and send all workers home with pay so they can be tested and do a proper deep clean.”

A Woolworths spokesman said they learnt of the case on Friday afternoon and contacted the Department of Health and Human Services soon after.

The last shift of the affected worker was Tuesday July 28, the spokesman said.

The site remained open on Saturday, the day after the positive test, the spokesman said, “because we had taken all necessary steps as recommended by the DHHS in response to a positive COVID-19 event”.

The Woolworths spokesman confirmed the opening of the centre on Monday had been delayed after a cease work notice was issued by the site’s health and safety representative.

“The safety of our team is our priority and we're working through the notice with the UWU and WorkSafe Victoria as a matter of urgency,” he said.

“We don't anticipate any material issues in our liquor supply to stores at this stage.”

Mr Toner said Victorians are facing harsh restrictions and Woolworths “needs to respect the sacrifice we are all making and treat this outbreak with the seriousness it deserves”.

Mr Toner said the UWU had given Woolworths a list of demands on Saturday including a 72-hour deep clean and that all current and soon-to-start workers and contractors be tested for the virus.

They also want an epidemiologist engaged to provide advice on management of the disease.

The union said the workers met on Monday morning and walked off the job after deciding Woolworths had not done enough.