In the last dozen years, 60 Minutes correspondent Scott Pelley and producer Henry Schuster have had front-row seats at the Federal Reserve as the central bank has navigated two financial crises. The 60 Minutes team first watched as the Fed sought to stabilize the economy during the Great Recession, and this week, they returned as the novel coronavirus has sent unemployment soaring to levels not seen since the Great Depression.

“Back in 2009 all hands were on deck in the Federal Reserve’s historic building in Washington,” Pelley said. “One of the Federal Reserve senior managers told me that there were so many people crammed into rooms that the room stank.”

Now those same rooms are desolate. Efforts to prevent the coronavirus have moved most employees to work from home, leaving the Fed mostly empty—a far cry from the days of the Great Recession, when then-Chairman Ben Bernanke spent nights sleeping on a couch in his office.

But what has not changed is the Fed chief’s willingness to speak with 60 Minutes in an effort to assure the American public that banks are sound. Prior to March 2009, when Pelley first interviewed Bernanke, the head of the Fed simply did not give interviews—because when Fed chief talks, markets react. But during the Great Recession, Bernanke knew the country was going through what he called “an extraordinary time.”

“This is a chance for me, I think, to talk to America directly,” he told Pelley at the time.

Since then, Pelley and Schuster have continued to give the Fed chief that opportunity. 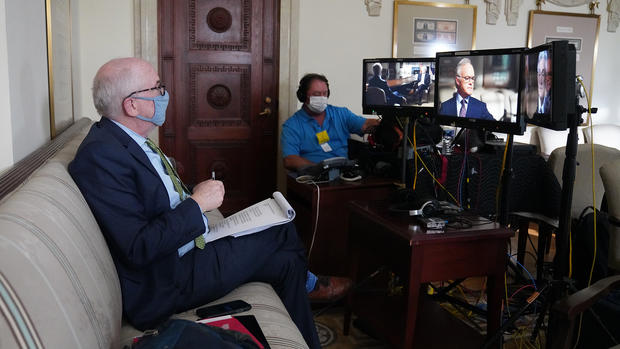 In 2010, as unemployment continued to rise, the 60 Minutes team returned to the Fed for a second interview with Bernanke, who wanted to keep the American public informed of how the Fed was responding.

By 2019, the tide had turned. The economy was approaching the longest economic expansion in U.S. history, so Pelley and Schuster met with the new chief of the Fed, Jerome Powell. At the time, Powell admitted to Pelley that he had been skeptical about some of Bernanke’s decisions during the Great Recession, particularly a policy known as quantitative easing. The policy involved the Fed buying billions of dollars in mortgage-backed securities in an effort to get business investment and credit markets moving again. At its peak, the Fed balance sheet held trillions of dollars in bank debt, mortgage-backed securities, and Treasury notes.

Looking back on it last year, Powell said he realized the risks he had feared hadn’t come to pass. He acknowledged that, if similar economic conditions were to present themselves in the future, the Fed would consider using quantitative easing again—and he has.

“These are some of these things that don’t have a precedent,” Powell told Pelley in 2019. “And so you’ve got to go through them and bring your best thinking. And then learn lessons from what’s happened.”

“I believe the Federal Reserve moved so quickly in these last few weeks and with such a large amount of aid to the American economy because of the lessons that it learned during the Great Recession,” Pelley said. 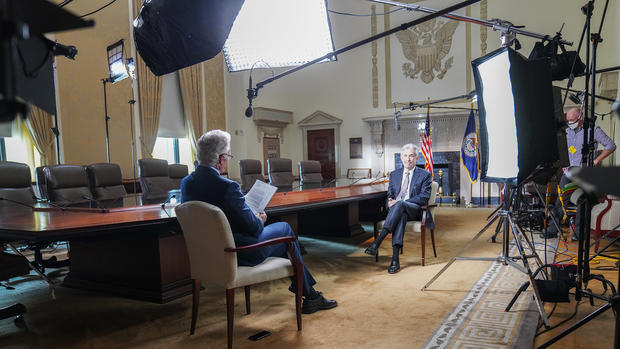 This week on the broadcast, Powell speaks with Pelley about the tactics the Fed has employed to offset the pandemic’s economic effects in the last two months and the additional measures it could still take. In March, after the Dow quickly shed 8,000 points and credit markets began to freeze, Powell cut interest rates to near zero and launched a $700 billion quantitative easing program. In partnership with the Treasury, the Fed also offered more than $3 trillion dollars of potential lending to banks, businesses, cities, and states.

“Last time they had to invent these new things in order to save financial system,” Schuster said. “This time, they’ve increased them by orders of magnitude and very quickly.”

But with all the lessons learned reflecting on the last financial crisis, Pelley and Schuster both said they were surprised to learn something the Fed had never accounted for—a global pandemic.

Pelley asked a former senior official at the Fed whether the central bank had a contingency plan for a pandemic, whether economists had gone through exercises in which they imagined a virus shutting down the world economy.

“He said, ‘We were much more concerned just a few years ago with cyberattacks, with what would happen to the economy if the entire electricity grid was attacked and the lights went out,'” Pelley recalled the official saying. “‘But pandemic was just not one of the things that we were thinking about.'”