Beloved Grammy-winning singer Adele, the voice of a thousand shopping centre food courts and doctors' waiting rooms, is at the centre of a race controversy? That can't be right. Unlikely as it might seem, yes it is.

What did she do? She posted an Instagram photo of herself sporting a Jamaican flag bikini top and her hair in Bantu knots in an apparent nod to London's Notting Hill Carnival, an annual festival celebrating the West Indian diaspora in Britain. It's generally held at this time of year but, like all things social, has gone virtual due to the pandemic. 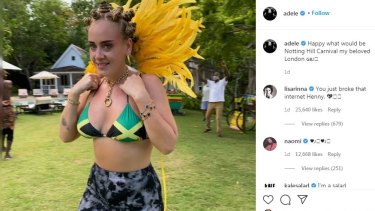 Ok. And people are upset because…? Cultural appropriation. Non-black people sporting traditional black hairstyles – such as Bantu knots, cornrows, box braids and dreadlocks – is contentious due to the unfair power dynamics at play. When black people are still discriminated against for wearing their natural hair, it's obnoxious for non-black people to borrow those styles in the name of "fashion" or for a cheesy costume.

What exactly are people saying about Adele's misstep? The responses have run the gamut. A Twitter post which sent the debate viral said Adele's photo "officially marks all of the top white women in pop as problematic". Others suggested that during a time of powerful #BlackLivesMatter protests, it's particularly tone-deaf. Of course, it's also sparked memes – including a remix of the singer's hit Hello as a dancehall banger.

Has anyone backed her? Yes. Many of the singer's fans have waved off the accusations of "appropriation", saying Adele – as someone who would've grown up around London's West Indian communities – was obviously just showing her appreciation of Jamaican culture.

Sure, that's possible. In further solidarity supermodel Naomi Campbell posted Jamaican flags under Adele's original post, while Jamaica's reigning dancehall star Popcaan replied with love heart emojis. David Lammy, UK Labour's MP for Tottenham (Adele's hometown) was most forceful in his support. "Poppycock!" tweeted Lammy, in response to a Sky News article on the backlash. "This humbug totally misses the spirit of Notting Hill Carnival and the tradition of 'dress up' or 'masquerade'. Adele was born and raised in Tottenham, she gets it more than most. Thank you, Adele. Forget the haters."

It's an unlikely media circus for Adele. Do you think she's about to drop a new reggae song or something? Oof, I don't think so. She'd previously announced that her fourth album – the follow up to 2015's 25, originally due out in September – was postponed due to coronavirus, so this doesn't seem like some bizarre pre-release publicity stunt.

In any case, it's an interesting shift from all those headlines about her weight-loss. Unending tabloid focus on your body or a racist controversy? What a choice.