Over the weekend, the Hole front-woman called out the “High School Musical: The Musical: The Series” star’s photoshoot for her upcoming “Sour Prom” concert film — accusing the 18-year-old of ripping off her band’s cover art for the 1994 Hole album “Live Through This.”

In the photos, both Rodrigo and Love are pictured holding onto a bouquet of flowers as they rock crowns, running mascara and teased out hair. While it’s unclear who took Rodrigo’s photo, the Hole cover art was taken by famed photographer Ellen von Unwerth. Love started the smack talk by simply sharing Olivia’s picture to her Instagram page, captioning it, “Spot the difference! #twinning! @oliviarodrigo 😉👸👸”

While that comment seemed innocent enough, Love took it to the next level over on her Facebook page — calling out Rodrigo further in the comments. Responding to a fan who said Olivia’s was “a Disney Princess version of the Live Through This cover,” Love wrote, “It was rude of her, and Geffen not to ask myself or Ellen von Unwerth.” She added, “It’s happened my whole career so [I don’t care]. But manners is manners!”

In another comment, she wrote, “It’s on GEFFEN. I’ve informed I await her flowers snd note. I sure hope it’s long. Does Disney teach kids reading and writing? God knows. Let’s see. Yes this is rude. Rage inducing? Honey if I had a dollar for everyone this happens? I’d be real rich!”

“I’ve asked her for flowers and a note, [you’re] right. It’s rude not to be asked,” she wrote elsewhere. “I know Ellen von Unwerth isn’t amused. And just to clarify? The Brian de Palma classic ‘Carrie’ is another thing. My cover was my original idea. A thing you maybe have to actually live life to acquire? I don’t know. Anyway. Disney? Yes it’s rude.”

As the comments continued to come in, Love’s frustrated responses did as well.

“Stealing an original idea and not asking permission is rude. There’s no way to be elegant about it. I’m not angry. It happens all the time to me,” she wrote. “This was bad form. That’s not bullying or bmb throwing. This persons music has nothing to do with my life. Possibly never will. It was rude And I gave every right to stick up for my work. Don’t gatekeep me! I’m honorable as f— to my fellow artists, and I expect the same.”

Rodrigo eventually commented on Love’s initial Instagram post, reacting to the comparison by simply writing, “love u and live through this sooooo much.”

Love responded by, once again, asking about flowers and a letter. “Olivia – you’re welcome,” she replied. “My favorite florist is in Notting Hill, London! Dm me for deets! I look forward to reading your note!”

Selma Blair also left a comment on Love’s post, writing, “The best inspiration is always love. @courtneylove that is. ❤️❤️ love both” — while Garbage added, “You did it best though babe. Always and forever.” 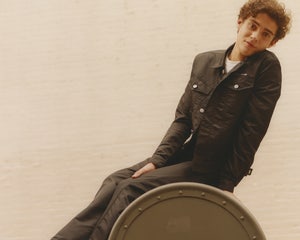