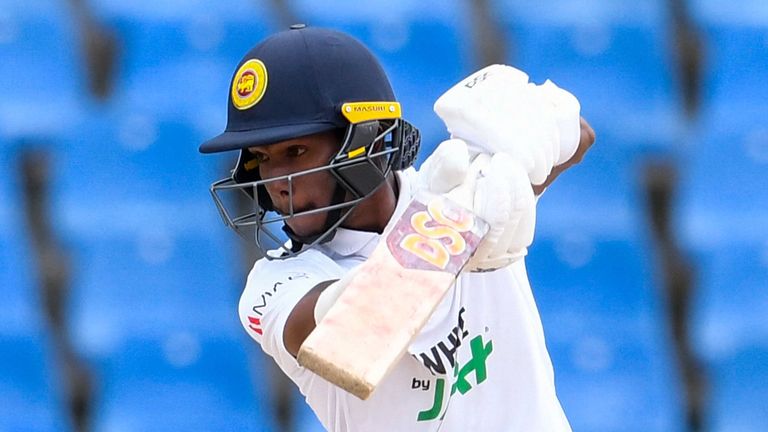 A stubborn 49 not out from Pathum Nissanka and intermittent rain prevented the West Indies from wrapping up Sri Lanka’s first innings on the third day of the second Test.

Only 42 overs of play were possible at the Sir Vivian Richards Stadium in Antigua, with Sri Lanka losing five wickets for the addition of 118 runs after resuming on 136-3.

When the rain returned to bring about a premature close of play, Sri Lanka were 250-8, still trailing by 104 runs.

The visitors lost two wickets in the morning session, with Dinesh Chandimal (44) and Dhananjaya de Silva (39) both failing to convert on good starts.

Chandimal fell to a trap set by Shannon Gabriel, who tempted him into hooking a short delivery and had him caught on the deep square-leg boundary.

De Silva went in more bizarre circumstances as part-time offspinner Jermaine Blackwood was brought on just before the second new ball became available. His first delivery trapped De Silva lbw, but it was turning sharply and would have been overturned on review, had the batsman referred the decision.

After lunch, and in between rain beaks, Niroshan Dickwella (21) inside-edged Jason Holder behind, while Suranga Lakmal (6) was caught at mid-on off Alzarri Joseph.

Dushmantha Chameera (2) departed cheaply after tea, but Nissanka – who scored a century on debut in the drawn first Test – hung around and is one short of a half century heading into day three.