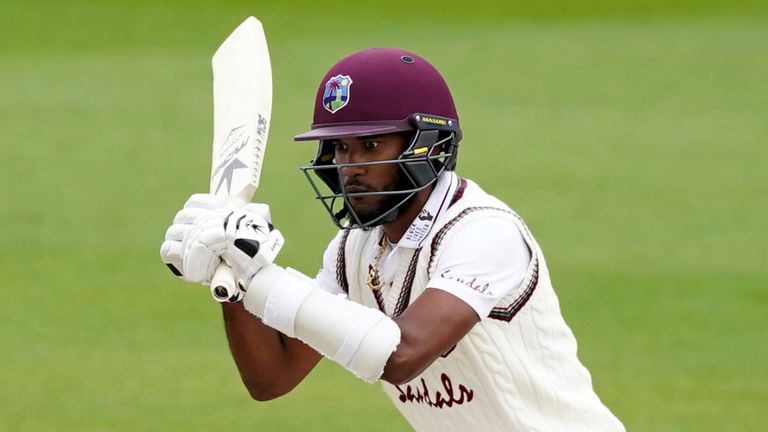 Kraigg Brathwaite led the way for the West Indies as they built a big lead before declaring late on day four to set Sri Lanka an imposing target of 377 runs to win the second Test and the series.

Brathwaite, who scored 126 in the first innings, contributed 85 on Thursday as the West Indies declared on 280-4 in their second innings.

Jason Holder also smashed a rapid 71 not out off 88 balls, while Kyle Mayers chipped in with 55 off 76 balls as the home side pressed on the accelerator as the day wore on.

Sri Lanka reached stumps at 29-0 as their openers, Lahiru Thirimanne (17no) and Dimuth Karunaratne (11no), safely negotiated the final 40 minutes of play without loss.

Sri Lanka earlier resumed their first innings on 250-8 but lasted only a further 23 balls before being bowled out with the addition of only eight runs – although it was long enough for Pathum Nissanka (51) to bring up his half-century.

In reply, captain Brathwaite anchored the West Indies second innings, their cause helped by a thigh injury to spinner Lasith Embuldeniya while fielding. He was taken to hospital and did not bowl.

Suranga Lakmal (2-62) and Dushmantha Chameera (2-74) chipped in with a pair of wickets each, but the Windies were able to force home their advantage courtesy of Mayers and Holder’s aggressive knocks.

Once the declaration came, the hosts were unable to make any breakthroughs in the opening nine overs of the Sri Lankan second innings.

The first Test was drawn, leaving the West Indies needing 10 wickets on the final day in Antigua to clinch the series, or for Sri Lanka to pull off the ninth highest successful chase in Test history.