Preet and Aman Chechi’s son Gurman turned two last month. They weren’t able to celebrate in person with him because he has been stuck in India since the coronavirus pandemic began.

Australian Border Force has rejected at least 15 applications over the past year from the Hobart couple for a travel exemption for their toddler to return home. 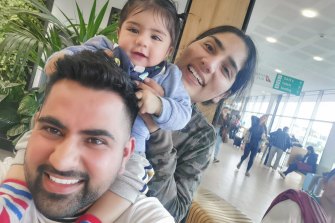 Aman and Preet Chechi with their son Gurman, pictured in December 2019 just before he travelled to India with his grandparents.

“We could sit down every day and do it … but every time we lodge the application, we always do have a hope that it will be yes this time,” Ms Chechi said. “But it’s always no. So it just breaks my heart, I don’t want to do it all the time.”

Mr Chechi has been in Australia as a temporary resident since 2014 and Ms Chechi since 2016. They applied for permanent residency last month.

Assistant Minister Amanda Stoker told Senate estimates last month “Australia isn’t the only option available” for people on temporary visas seeking to reunite their families, although some had been approved for travel exemptions.

“They do have other options and reunification in the other country is also an option available to them,” she said.

Home Affairs officials said they did take into account whether a child had lived in Australia before coronavirus-related travel restrictions were put in place when making decisions about exemptions.

“I don’t think we have any of those scenarios in play, though, because we have facilitated that [return],” assistant secretary Sandra Jeffery said last month.

But Greens immigration spokesman Nick McKim said he was aware of 53 families separated by Australia’s travel restrictions, with at least one parent apart from their children.

“It is an unacceptable situation given that we are now well over a year into the pandemic,” he told The Sydney Morning Herald and The Age.

“The government has been ruthless in its treatment of families who have built a life here in Australia, yet allows wealthy investors and the rich and famous to come and go as they please.”

Ms Chechi agreed to let her son travel to India with his grandparents in December 2019 for a couple of months because he was the first grandchild and she knew extended family wanted to meet him.

“The COVID word didn’t exist then, we had no clue it was going to take that long,” she said through tears.

“They were supposed to come back in February or in March but then the travel restrictions came in, and then they just couldn’t come back … My son who is born here, why can’t he come back to his home?”

Mr Outram rejected suggestions this showed a racial bias, saying he was “absolutely confident that our people are making decisions that are consistent, appropriate and based on the criteria and guidance provided” and that the department was transparent when it had made mistakes.