The agency in charge of Sydney's water catchment says it remains "strongly opposed" to the expansion of a coal mine, warning that without increased setbacks from two dam walls "risks and consequences could be extreme".

In a letter to the Planning Department last month, WaterNSW's manager for catchment protection Clay Preshaw said the extension of South32's Dendrobium underground mine in the Illawarra region could also trigger rock fracturing and potential water losses for nine major watercourses and about 100 smaller tributaries. 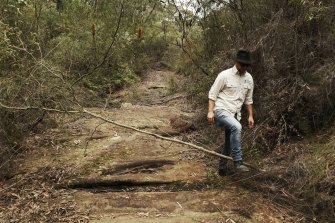 Duncan Rayner, a UNSW researcher, at a dried-up creek within the Metropolitan Special Area over the Dendrobium coal mine.Credit:Nick Moir

"WaterNSW remains strongly opposed to this project in its current form as none of its key concerns have been adequately addressed" on the expansion plan, Mr Preshaw wrote.

The agency believed there has been "insufficient consideration" of a mine design that would prevent or minimise drainage cracks reaching the surface. South32's predicted additional losses of as many as 5.2 million litres a day from the extension may also be an underestimation, he said.

The agency also reaffirmed its worry that the project could affect its ability to construct and operate future proposed infrastructure works, such as the Lower Cordeaux Dam and Avon Deep Water Access projects.

"WaterNSW also reiterates its position that the setbacks from the [Avon and Cordeaux] dam walls should be increased to at least 1500m due to potential far-field differential movements," Mr Preshaw said. "Should any impacts occur to these dams, there is the potential that the risks and consequences could be extreme." 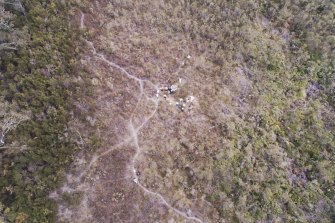 Swamp 1B in the Metropolitan Special Area is drying out, with WaterNSW and environmental scientist blaming longwall coal mining at the Dendrobium mine underneath as the main culprit.Credit:Nick Moir

A Planning spokeswoman said the department "will fully consider the issues raised by WaterNSW in its assessment of the expansion, and has recently asked South32 to provide a detailed response".

A South32 spokeswoman said it takes its environmental responsibilities "seriously". "Dendrobium Mine operates under a well-established regulatory framework, which includes strict performance criteria and comprehensive monitoring and reporting requirements," she said.

"South32 has addressed the relevant recommendations of the Independent Expert Panel report in the recent Response to Submissions report. Many of the IEP's recommendations are consistent with our operations and already incorporated into our operating system and processes. South32 does not longwall mine beneath dams, named water courses or key stream features."

Planning Minister Rob Stokes on Saturday announced the government would accept all 50 recommendations of an independent expert panel for future mining in Sydney's catchments.

Nic Clyde, a spokesman for Lock the Gate, said WaterNSW "hasn't pulled any punches" in its criticism of South32's plans.

“In 2018, it was revealed six billion litres of water had been diverted from creeks feeding Sydney water catchments into underground coal mines in the special areas," Mr Clyde said. “The government needs to declare the special areas off-limits to new coal mining."

Stuart Khan, a professor in UNSW's School of Civil & Environmental Engineering Research, said "we would be very foolish" to ignore WaterNSW's "wide-ranging and very significant" concerns.

"I strongly agree with the concerns of WaterNSW regarding the heavy reliance on ‘post-approval’ management of risks," Professor Khan said. "Once a project is approved, the major opportunities to avoid significant risks are lost."

Labor's energy spokesman Adam Searle said any planning approvals "should be based on the science, including protecting our precious water".