TYSON FURY stepped up his training ahead of his third fight with Deontay Wilder with a workout on the beach… and a sing-song.

The British star, 32, is preparing to complete his trilogy with the Bronze Bomber before a double-header with Anthony Joshua. 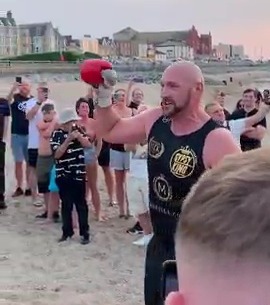 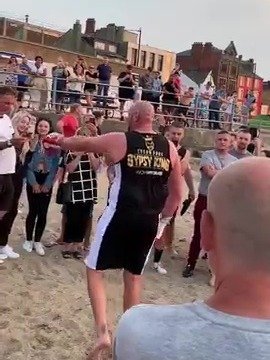 The first fight with AJ could potentially be an all-British heavyweight unification fight.

But he must battle past old foe Wilder, first.

Despite the pressure, Fury clearly hasn't let it get to him as he thrilled fans in Morecambe yet again.

The Gypsy King enjoyed a workout on the beach in front of his supporters.

He shared a picture of his session – wearing an all-black outfit and red boxing gloves – to Instagram.

Fury captioned the snap: "Come get some from the ever ready champ! #bringiton".

But once his training was done, Fury went on to enjoy his other love… singing.

The British star gave his adoring crowd a rendition of one of his old favourites – Don McLean's American Pie, the same song he belted out after his win over Wilder in February.

After serenading the beach-goers, Fury roared: "Thank you Morecambe!"

Proud Morecambe star Fury has been a regular on the bay in recent weeks.

As well as showing off the latest car to his ever-growing collection – a classic MINI Cooper – Fury has sparred with dad John on the beach AND taken part in a gruelling seven-mile wheelchair race.

As well as Joshua and Wilder, Fury is meant to fight Dillian Whyte in the near-future as WBC mandatory challenger.

Whyte is currently in line to take on Fury but could surrender his chance to Alexander Povetkin if he loses the "Diamond" belt in the final Fight Camp next Saturday.

Speaking to iFL TV, promoter Eddie Hearn said: "[The WBC Diamond] is on the line for the first time.

"It’s still for the interim world heavyweight title, but also the Diamond belt.

“It’s the most important heavyweight fight this year by a mile.

"Alexander Povetkin can bowl in and become WBC mandatory just by winning this fight. Dillian Whyte has waited 1000 days.

"The winner of Fury against Wilder has to fight Dillian Whyte or Povetkin or vacate the belt.

"If they [Fury and Wilder] fight in December, we’ve always known that February is unlikely. 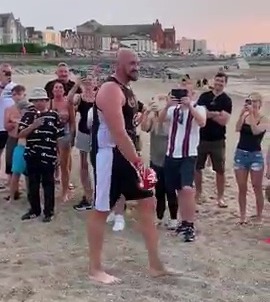 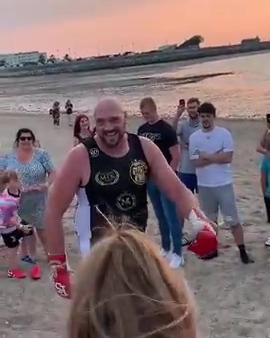 “So if Fury wants to vacate and Dillian Whyte fights No1 or No2 for the title, he can fight AJ for the undisputed."