John Cena appeared on the Sept. 29 episode of The Tonight Show and served as Jimmy Fallon's first in-studio guest since March. Watch them mark the reunion with a serenade. 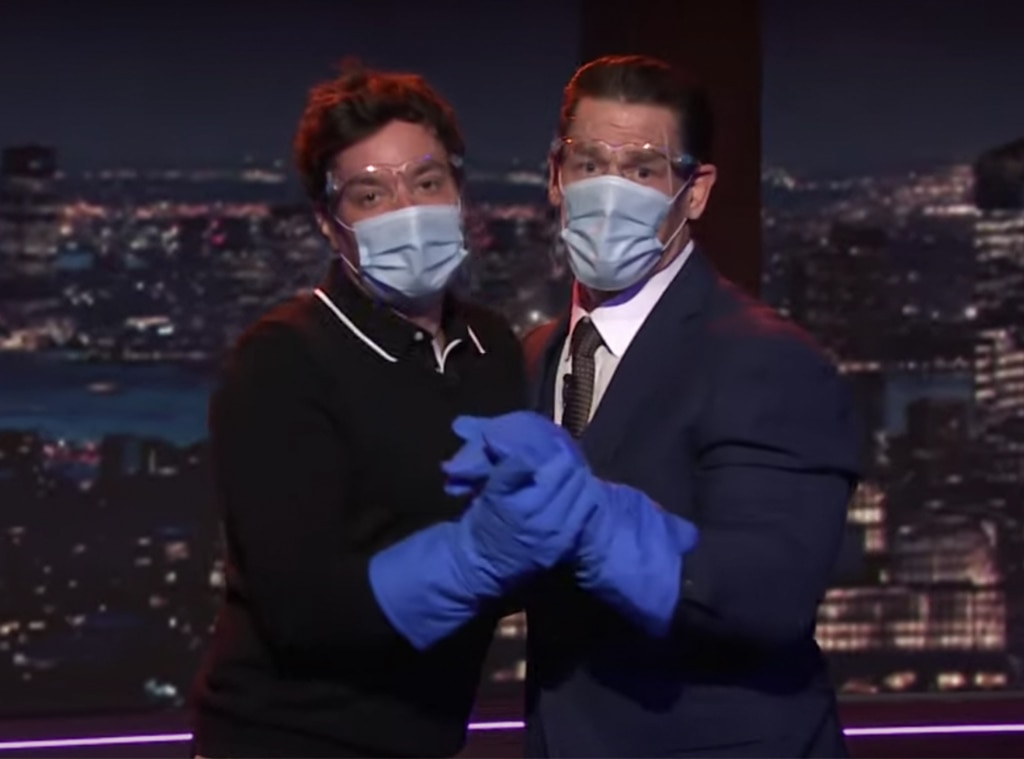 "Reunited and it feels so good."

On the Sept. 29 episode of The Tonight Show, John Cena served as Jimmy Fallon's first in-studio guest since March.

"He's actually here," Fallon said, "and he's the first guest that we've had in the studio for a while."

To mark the major moment, the 46-year-old late-night host and the 43-year-old WWE star performed a duet of (what else?) "Reunited." However, they gave the song a bit of a quarantine twist and switched up the lyrics.

"Reunited from six feet away. Reunited so we're going to stay," the duo sang while practicing social distancing. "We're feeling so well. Hey, you smell like Purell (me too!). I'm glad we're not nearsighted. Now, we're reunited, hey, hey."

At one point in the number, the two put on masks, face shields and gloves and came together for a hug and a dance.

After their routine, Fallon and Cena sat down for a chat and reminisced about a few of their favorite memories from before the coronavirus pandemic.

They also spoke about Cena's new children's book, Elbow Grease; his upcoming projects, including Fast & Furious' F9 and The Suicide Squad; and BTS in honor of the show's "BTS Week."

"Man, I appreciate you having me here but also doing it the right way," Cena said. "I mean, tested when we got in, everybody is social distancing, covered in protective gear. I've never felt more safe. And man, as much as I want to give you a big old hug, we're six feet and we're doing it the right way. So, it's a start."

But that's not all! They also played a few rounds of "Toss it Over"—a game in which each player threw random items over a giant wall and had their opponent catch the mystery items.

Watch the videos to see their performance and interview.

(E! and NBC are both part of the NBCUniversal family).