Prime Minister Scott Morrison has been lambasted for saying January 26 "wasn’t a particularly flash day" for British convicts either as they arrived on the First Fleet to colonise Australia.

Defending the national holiday, Mr Morrison on Thursday advised Cricket Australia to stay out of politics and stick to cricket after a recommendation to dump the words "Australia Day" from promotions for Big Bash League fixtures on January 26. 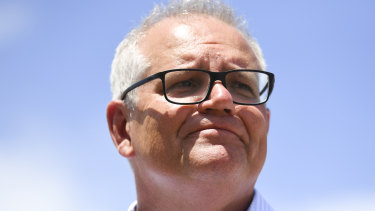 Prime Minister Scott Morrison is under fire for his comment about convicts on the First Fleet not having a ‘flash’ day on January 26, 1788.Credit:Lukas Coch AAP

Labor and the Greens slammed the comments after Mr Morrison said the circumstances of settlement in 1788 had been difficult for both Indigenous and non-Indigenous Australians.

Asked about civics tests for year 10 students, Mr Morrison responded by talking about how far Australia has come as a nation, how important Australia Day was to celebrate, and the national apologies made.

"When those 12 ships turned up in Sydney all those years ago, it wasn’t a particularly flash day for the people on those vessels either," he told reporters on Thursday.

Mr Morrison made his feelings clear about CA's proposal ahead of the three BBL games set down for Tuesday – a recommendation made by its First Nation's Advisory Committee in a bid to normalise conversations over the date's history.

"I think a bit more focus on cricket and a bit less focus on politics would be my message to Cricket Australia," Mr Morrison told radio station 4RO.

He later told reporters it was "not cricket" and said: "It's not about that so much, it's about how far we've come together since that day.

"You can't just airbrush things that have happened in the past. I think one of the great things about Australia … is we are pretty up front and honest about our past."

"As the leader of the country, he has an example to set for the rest of the nation," Ms Burney said.

"How can we expect to see real progress on issues such as Reconciliation and Closing the Gap when he makes such ignorant and unhelpful comments like this? Suffering is not a competition."

Greens First Nations spokeswoman Lidia Thorpe said the Prime Minister had an opportunity to unite this country, not to divide it.

"And that starts with telling the truth about this country’s history. First Nations people have been here since time immemorial. Despite the massacres and the genocide, we are here. We have survived," Senator Thorpe said.

"A person fit to lead this country would acknowledge this day for what it is – as a Day of Mourning."

She said maybe the "colonising" First Fleet did feel sick on the boat.

"I can tell you that we feel sick to think that 26 January is a day that the leaders of this country should choose as the national day of celebration. For First Nations people, it’s like dancing on the graves of our ancestors."

Mr Morrison has previously spoken of his family’s centuries-old ties to Australia Day with his fifth-great-grandparents arrived in Australia as convicts. In 2019 he said in an address it "wasn't a great day for my fifth-great-grandfather, William Roberts", who was transported for stealing five-and-a-half-pound of yarn valued at nine shillings.

Mr Morrison said his ancestor was sick, poor and destitute as he was "thrust into an unknown place and an unknown future". "It was a new beginning for him, but it would have seemed a particularly grim one at the time and life was indeed about to get a lot tougher."

"There was no politics in regards to changing the date or anything along those lines. The conversation was purely about, 'how do we help this day be as safe and respectful for everyone involved in cricket'," she said.

"A lot of the members said, 'it's the most unsafe day of the year they feel as an Indigenous person', yet they love cricket, so they still want it to be played because there's a wonderful opportunity for us to hear our Indigenous voices and hear all the wonderful stories come through."

Mr Morrison’s assistant minister Ben Morton, who has responsibility for the National Australia Day Council, said Cricket Australia had made a "well-intentioned but very poor decision".

Mr Morton said there had been a pivot in the way Australia Day was marked in recent years.

"We are seeing more Indigenous events and activities to share the full story of Australia that started well before European settlement in Australia," he said. "And cricket and sport is an ideal way to keep doing that."

She said the national sporting body was a "professional outfit" and she didn't think it was too late for it to reverse its stance.

"I hope they do change their mind, I mean, you can't imagine Australia Day or summer without the cricket. Cricket in Australia, they kind of go hand in hand. Look, as I said, they're a professional outfit, an extremely well run organisation and I would hope they'd reconsider that, on behalf of the nation," Ms Berejiklian told Sydney radio 2GB.

"I mean, don't get me wrong, I think there's ways in which we can consider how we support our longest surviving culture on the planet. Our first people deserve every respect and admiration, but I also think it's not good to do those events on a day … Australia Day is really about bringing all of us together, and I think that's what we should aim to do."