The Melbourne Vixens raised their 2020 Super Netball premiership banner before Saturday’s season-opener against West Coast Fever, but the visitors quickly reminded them how much work is ahead should they have any hope of contending for this year’s title.

With premiership shooters Caitlin Thwaites and Tegan Philip retired, plus star centre-courter Liz Watson out for the season due to foot surgery, the younger Vixens fell 65-51 to the focused Fever. 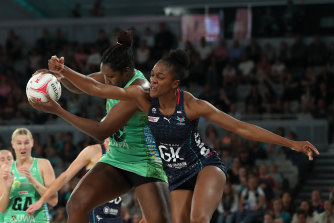 The Fever’s performance was even more impressive given they started on -12 premiership points due to historic salary cap breaches yet they showed a determination to not let that millstone weigh them down. The four points from this win means Fever need two more wins to get back to zero.

Fever shooter Jhaniele Fowler was dominant in the goal circle, shooting 54 of 58 attempts, while her teammates’ passing chemistry stood out in the way the ball was consistently delivered.

Vixens’ star shooter Mwai Kumwenda shot 31 of 32 goals. She will be potent this year but who her best partner remains in question with Kaylia Stanton starting at goal attack yet 19-year-old shooter Ruby Barkmeyer playing the bulk of the game at GA.

Vixens coach Simone McKinnis said her side would learn plenty from the match.

“You never want a loss like that, it’s not what we are after, but I think there is plenty of up from there and we will get better and better each week,” McKinnis said.

“It is a big difference [from last year] but there was a sense of camaraderie that they are building between each other. It’s new, it’s different and you will always miss players with that experience but I loved seeing Ruby and Hannah [Mundy] going for it in their first match. I loved it.”

The Vixens made a promising beginning as 19-year-old Mundy made her debut as the replacement at wing attack for Watson, with her early feed finding the mark including a centimetre-perfect pass through several Fever hands for a goal.

But Fever shooter Alice Teague-Neeld reminded fans of her long-shooting prowess with a couple of super goals as her side led 16-12 at quarter-time. 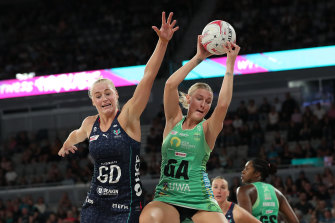 The second term was more of the same as the Vixens toiled hard but failed to slow their opposition while a growing number of turnovers further aided the Fever who took their lead to 10 points but the Vixens still trailed 34-27 at half-time.

The Vixens tried to change in the third term and for a time they succeeded with captain Kate Moloney lifting her side’s defensive energy while defender Kadie-Ann Dehaney jumped off the bench to force two intercepts and even block a super goal attempt.

But the Vixens only made a slight dent in the lead before a late super goal from Sasha Glasgow and a buzzer-beater from Fowler gave the Fever the quarter with a 47-38 lead.

That lead only grew in the last term.

The Vixens still have the foundations of a winning side, but the question will be whether they can find their best line-up quickly enough to remain in contention for the finals.