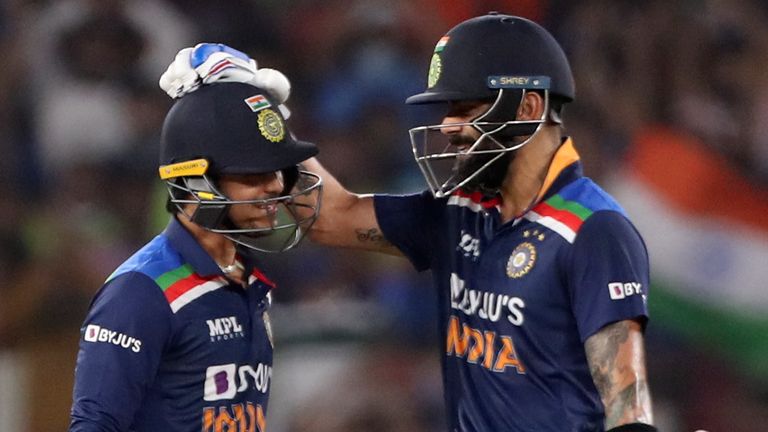 Virat Kohli and debutant Ishan Kishan smashed fifties as India stormed to a series-levelling victory over England in the second T20 international.

After England’s crushing win in the series opener, India produced a similarly dominant display in Ahmedabad as they chased down 165 with 2.1 overs to spare, Kohli (73no from 49 balls) sealing it with a six to take him past 3,000 runs in T20I cricket.

Jason Roy (46 from 35) again top-scored for the tourists but, similarly to the first game, batting was tough early on before getting easier in the second innings, and nobody else was able to get going as England struggled their way up to 164-6.

Eoin Morgan’s side were then made to pay for dropping both Kohli and Kishan (56 from 32) as India were able to cruise to the target with seven wickets in hand.

Having been put into bat, England suffered an early blow when Jos Buttler was dismissed lbw first ball by Bhuvneshwar Kumar (1-29) having shuffled across his stumps.

Roy helped them move past that though as he deposited Washington Sundar’s first ball into the stands, but that was a rare occasion in which an England batsman was able to connect cleanly on a tricky surface. That did not stop Roy from swinging hard throughout his innings and his approach was as successful as any in the innings but for the second game in a row, he fell just short of a half-century.

Dawid Malan (24) had been trapped lbw by Yuzvendra Chahal after a good review from India before Roy, having been dropped by the legspinner on 44, holed out in the next over to give Sundar (2-28) his first wicket.

The offspinner claimed his second in his near-identical fashion in the next over, Jonny Bairstow (20) caught by debutant Suryakumar Yadav, three balls after the same fielder had seen the ball burst through his hands and go for six.

England played 27% false shots in their innings – the last time they played more was the fifth T20I against New Zealand at the end of 2019. #INDvENG

Eoin Morgan managed to find the boundary on four occasions to help England maintain some kind of momentum but India’s bowlers were exploiting the conditions superbly, bowling into the pitch and taking pace off.

It was the latter than did for Morgan (28) as he was undone by Shardul Thakur (2-28), who also accounted for Ben Stokes (24), who had grown increasingly frustrated at being unable to time the ball, in the last over.

Sam Curran hit the last ball for four to bolster the total and then opened the bowling, reeling off five dot balls to KL Rahul (0) before finding his outside edge with the last; Buttler with the catch behind. 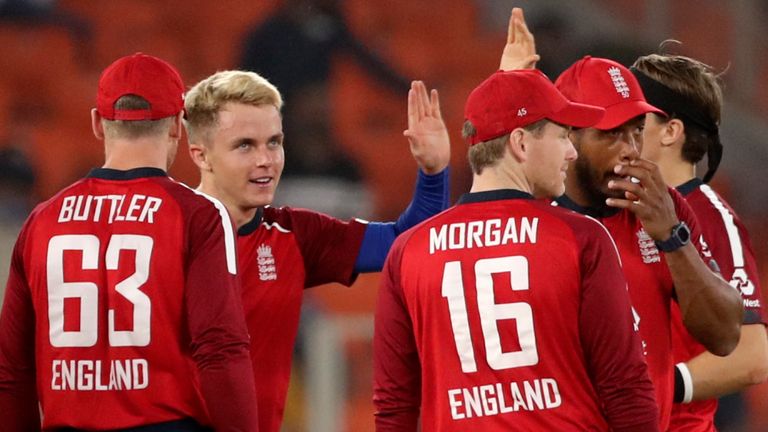 It was the perfect start for England and it almost got better before the end of the powerplay as Kohli, on 10, glanced Chris Jordan down the legside but this time Buttler was unable to cling on as he dived to his left.

Kohli took advantage of the opportunity and with the 22-year-old Kishan batting fearlessly at the other end, the pair put the pressure back on England’s bowlers, collecting a boundary an over to bring the required rate down.

Stokes’ only over cost 17 and his day got worse when he shelled a straightforward chance at long on when Adil Rashid deceived Kishan with a ball out of the front of the hand.

The left-hander proceeded to hammer Rashid (1-38) for back-to-back sixes at the start of the leggie’s next to reach an excellent 28-ball fifty, only to be trapped lbw later in the over.

India were still in control of the situation though, even more so once Rishabh Pant blitzed a 13-ball 26 that included two fours and two sixes before falling to Jordan (1-38).

Kohli had just been ticking over but went to his fifty in style, advancing to Tom Curran (0-26) and just easing the ball over long off for six; his half-century coming up from just 35 deliveries.

The India skipper had another moment of good fortune soon after as the third umpire adjudged that he had something behind the line as England appealed for a stumping off Rashid, wicketkeeper Buttler was less convinced of that after seeing the replays but it would have done little to alter the result.

England’s bowlers, Sam Curran (1-22) and Jofra Archer (0-24) aside, had not been able to replicate their performance from the first match and they were punished, Kohli finishing it off for India in the 18th over as he effortlessly flicked Jordan over long leg for six.

After two one-sided games, the teams head into Tuesday’s third match with the series tied at 1-1.

Watch the third T20I between India and England from 1pm, Tuesday on Sky Sports Cricket.