Victoria's Chief Health Officer Brett Sutton has hinted visits to family and friends in small numbers could be allowed when authorities downgrade stage four coronavirus restrictions in Melbourne, which they hope to do in a month. 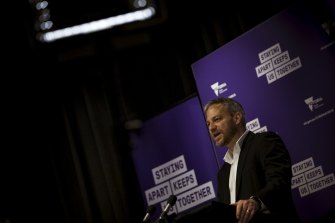 He said Victorians should have "hope and confidence" that their compliance with stage four measures was proving effective even though it was too early to confirm restrictions would be relaxed after six weeks on September 13, as initially announced by Premier Daniel Andrews.

Professor Sutton warned, however, that with more than 2000 active cases linked to aged care, scores more deaths were expected and Saturday's death toll of four was "probably just a blip".

Home visits have been banned in Melbourne and Mitchell Shire since stage three restrictions began on July 8. An easing of stage four on September 13 would mark almost 10 weeks and Professor Sutton acknowledged a period of isolation that long would be particularly difficult for some Victorians.

"We certainly always balance: what are the benefits – psychological, health-wise – in terms of easing of restrictions?" Professor Sutton said on Saturday.

"It’s profoundly challenging to be on your own. For single-parent households, for people living on their own, not being able to see others is a really significant thing.

"We’ve constrained those home visits because we know that transmission has occurred there. But I’m very mindful of the fact that’s a burden that everyone is carrying and some people will really struggle with." 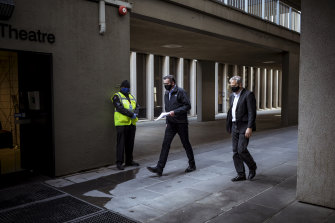 Mr Andrews attributed the initial spread of Victoria's second wave in June to gatherings of family and friends larger than the permitted limit of 20, which Professor Sutton said authorities would have to be wary of.

"It's a fine balancing act … we may move to a point where we can say that you can have visitors at home obviously, but we need to balance that against what that transmission risk is," the Chief Health Officer said.

"I don’t think we’ll be jumping to 10 people immediately, I think it will be an incremental easing."

Saturday's 303 new cases brought Victoria's seven-day average to 344 per day compared to 520 last Saturday. Mr Andrews said he was "hopeful about these numbers" but warned against complacency.

"I'm incredibly cautious to not have anyone, not even one Victorian, come to the conclusion that … 'we're on the run now, we can just let it all unfold'," the Premier said.

The Premier pointed to Victoria's 7875 active cases, including 1178 healthcare workers and 2041 cases linked to aged care, as a cautionary sign.

About half of those aged care cases are elderly residents and Professor Sutton said they also made up the majority of Victoria's 661 hospitalisations.

"[Aged care] is a very vulnerable population, we will see more deaths with those infections," he said.

There wre 45 Victorians in intensive care on Saturday including nine people younger than 50, according to government data.

Professor Maximilian de Courten, a public health expert with Victoria University, said he believed Victoria was on track to ease restrictions on September 13 and he was hopeful daily case numbers would drop to double-digits within 10 days if Victorians stay vigilant.

"I'm optimistic but I'm holding my breath for a couple more days of evidence to be certain," he said.

Professor James McCaw, a Melbourne University epidemiologist whose team at the Doherty Institute prepares modelling for the Victorian government, said Victoria's effective reproduction rate was about 0.9 when calculated earlier this week, meaning every 10 coronavirus cases will infect nine others on average.

He said he expected it will drop below 0.9 this week as Melbourne and Mitchell Shire move into a third week of stage four restrictions.

An effective reproduction rate of 0.5 would mean daily case numbers halve every day and Professor Sutton said that was Victoria's aim.

"If it's looking like it's getting towards 0.6 then we're doing very well," Professor Sutton said.

Professor Sutton added that mobility data from Google and Apple, such as how often Victorians were travelling or searching for directions, showed movement was now as limited as in mid-April when stage three restrictions drove case numbers down.

Professor de Courten called on Mr Andrews to be more transparent about what an easing of stage four restrictions could look like in September.

"You can sell a bitter pill when it has an end in sight," the public health expert said. 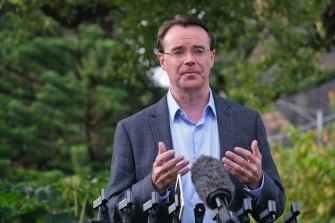 "I think Victorians are being asked to make so many sacrifices at the moment, the least the government could do is bring us into their confidence and tell us: how does the easing out of stage four look?" Mr O'Brien said.

Mr O’Brien told Health Minister Jenny Mikakos to refrain from "self pity" on Saturday, after she said she regarded herself as “unlucky” being in charge of health during a one-in-100-year event such as a pandemic.

“The Health Minister says she feels unlucky. Well minister, how about the hundreds of Victorians who've died?,” he said.

"[Ms Mikakos] seems to be engaging in what can only be regarded as being a bit of an act of self pity."