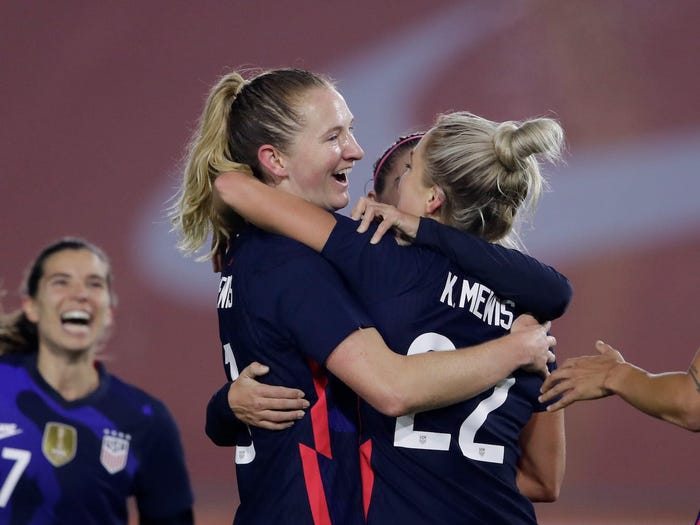 Kristie Mewis put a bow on top of the US Women's National Team's victory against the Netherlands Friday with a picturesque left-footed strike that marked her first national team goal in 2,722 days.

And no one was happier than her sister, USWNT star Sam Mewis.

The younger of the two Mewis sisters and a regular national team starter since 2017, Sam was the first player to embrace Kristie after her 70th-minute goal. And after the game, the North Carolina Courage turned Manchester City star took to social media to express how proud she was of her older sister and role model.

"Never been prouder to see Mewis on the scoresheet ❤️," Sam wrote as the caption of her postgame Instagram post. "I love you @kmewis19."

The elder Mewis, who plays for the Houston Dash and led the NWSL in assists during the league's fall series, posted photos from the day to her Instagram, too. After setting the national team record for most days between goals, Kristie wrote in her caption that she was sorry that she "selfishly made you [Sam] run across the field that one time when you were tired and I was fresh."

And during her postgame press conference, the 29 year old said that she felt "oddly comfortable" rejoining the team after so long partly because she had her sister by her side.

"I was definitely a little bit nervous but I did feel comfortable and I just couldn't wipe the smile off of my face," Mewis said. "I was trying to be so serious but I couldn't. I just saw Sam and she was smiling at me. I did feel oddly comfortable and I think it's because she was on the field."

"Turning around and just realizing what had just happened and seeing Sam and Alex [Morgan] running towards me [after I scored] was so special," Mewis added. "It was a very surreal moment for me. It hasn't really sunk in yet."

The USWNT will reconvene in January ahead of its annual SheBelieves Cup run. And given the Mewis sisters' stellar 2020 campaigns, it would be something of a shock if the pair weren't on head coach Vlatko Andonovski's next roster.

Check out the full replay of Kristie's big moment and the Mewis sisters' celebration below: