Business owner on struggle to rebuild after riots in Ferguson

Tens of thousands of protesters took to the streets across America again Sunday, with peaceful demonstrations against police killings of black people overshadowed by unrest that ravaged cities from Philadelphia to Los Angeles and flared near the White House.

City and state officials deployed thousands of National Guard soldiers, enacted strict curfews and shut down mass transit systems to slow protesters' movements, but that did little to stop parts of many cities from again erupting into mayhem.

Protesters in Philadelphia hurled rocks and Molotov cocktails at police, officials said, while thieves in more than 20 California cities smashed their way into businesses and ran off with as much as they could carry — boxes of sneakers, armloads of clothes, and cellphones, TVs and other electronics.

In Minneapolis, a tanker truck driver drove into a massive crowd of demonstrators nearly a week after the death of George Floyd, a black man who pleaded for air as an officer pressed a knee into his neck. No protesters appeared to be injured, and the driver was arrested.

Tensions spiked outside the White House, the scene of three days of demonstrations, where police fired tear gas and stun grenades into a crowd of more than 1,000 chanting protesters across the street in Lafayette Park. The crowd ran away and piled up road signs and plastic barriers to light a raging fire in a nearby street. Some pulled an American flag from a building and threw it into the blaze. 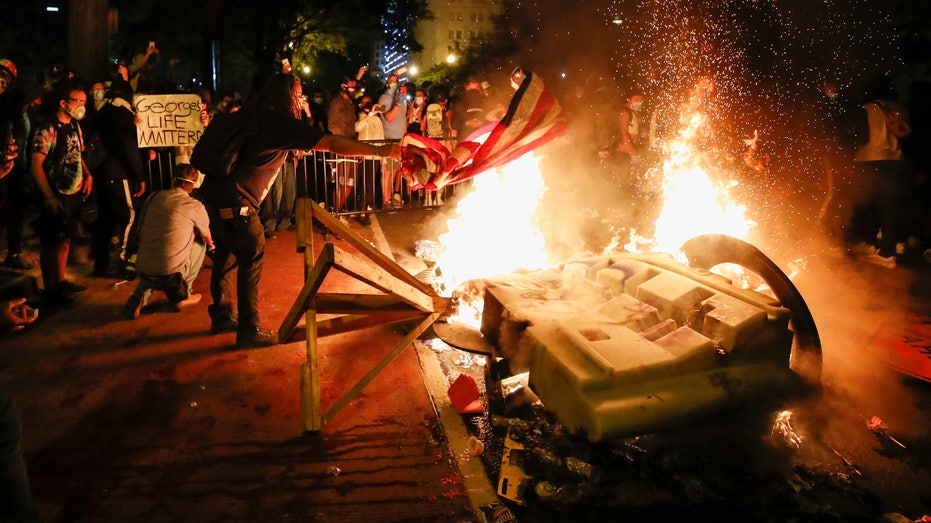 Demonstrators start a fire as they protest the death of George Floyd, Sunday, May 31, 2020, near the White House in Washington. Floyd died after being restrained by Minneapolis police officers (AP Photo/Alex Brandon)

A building in the park with bathrooms and a maintenance office went up in flames and people broke into banks and jewelry stores. As demonstrations persisted past curfew, Washington police said they were responding to multiple fires set around the capital.

The entire Washington, D.C., National Guard — roughly 1,700 soldiers — was called in to help control the protests, according to two Defense Department officials who insisted on anonymity because they were not authorized to publicly discuss the matter. 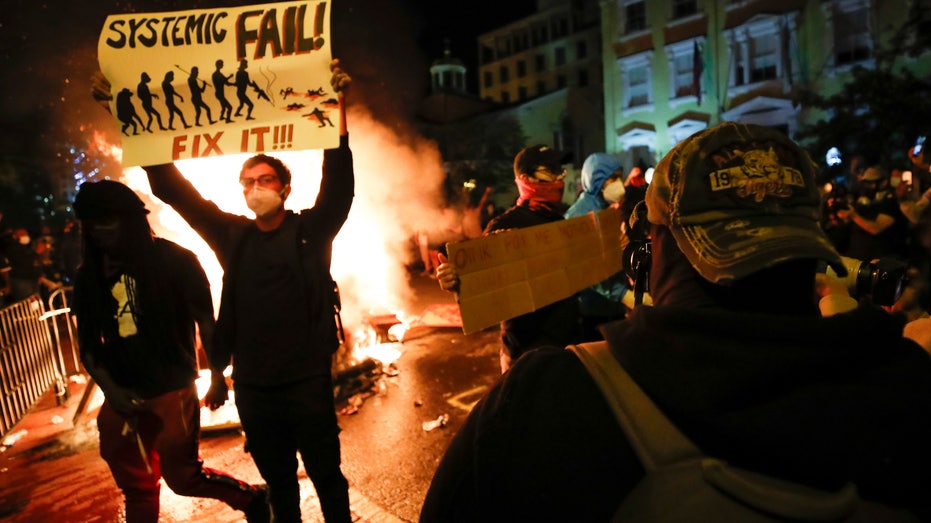 Demonstrators protest the death of George Floyd, Sunday, May 31, 2020, near the White House in Washington. Floyd died after being restrained by Minneapolis police officers (AP Photo/Alex Brandon)

Secret Service agents had rushed Trump to a White House bunker on Friday night as hundreds of protesters gathered outside the executive mansion, some of them throwing rocks and tugging at police barricades. The president spent nearly an hour in the bunker designed for use in emergencies like terrorist attacks, according to a Republican close to the White House who was not authorized to publicly discuss private matters and spoke on condition of anonymity. The account was confirmed by an administration official who also spoke on condition of anonymity.

Former Vice President Joe Biden, the presumptive Democratic nominee for president, visited the site of protests in his hometown of Wilmington, Delaware, and talked to some of the demonstrators. He also wrote a post on Medium expressing empathy for those despairing about the killing of George Floyd.

At least 4,400 people have been arrested over days of protests, according to a tally compiled by The Associated Press. Arrests ranged from stealing and blocking highways to breaking curfew. 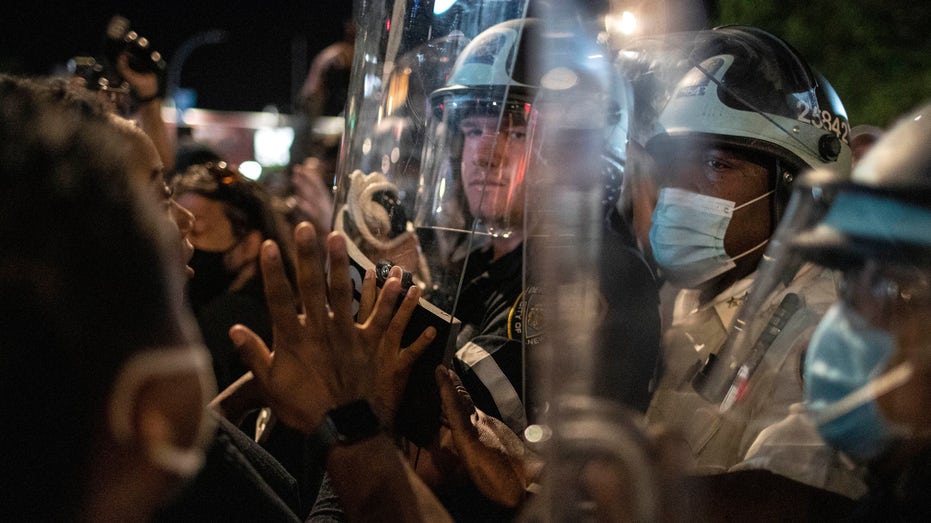 Police hold off protesters during a solidarity rally for George Floyd, Sunday, May 31, 2020, in the Brooklyn borough of New York. Protests were held throughout the city over the death of Floyd, a black man in police custody in Minneapolis who died af

In Salt Lake City, an activist leader condemned the destruction of property but said broken buildings shouldn’t be mourned on the same level as black men like Floyd.

“Maybe this country will get the memo that we are sick of police murdering unarmed black men,” said Lex Scott, founder of Black Lives Matter Utah. “Maybe the next time a white police officer decides to pull the trigger, he will picture cities burning.”

Yet thousands still marched peacefully in Phoenix, Albuquerque and other cities, with some calling for an end to the fires, vandalism and theft, saying it weakened calls for justice and reform.

“They keep killing our people,” said Mahira Louis, 15, who marched with her mother and several hundred others in a peaceful protest through downtown Boston. “I’m so sick and tired of it.”

But as night fell that demonstration also descended into violence, with some protesters throwing rocks, bricks and glass bottles at officers and lighting a police vehicle on fire.

In downtown Atlanta, authorities fired tear gas to disperse hundreds of demonstrators. Mayor Keisha Lance Bottoms said two officers had been fired and three placed on desk duty after video showed police surrounding a car Saturday, then pulling a woman out of the passenger seat and appearing to use a stun gun on a man who was driving. Police Chief Erika Shields called it “really shocking to watch.” 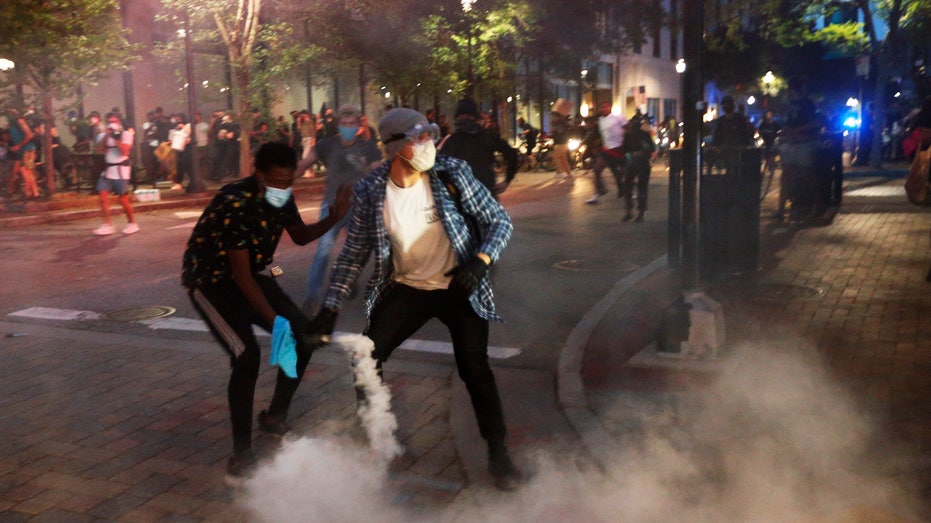 A protester tosses a smoke bomb towards police during a third night of unrest Sunday May 31, 2020, in Richmond, Va. Gov. Ralph Northam issued a curfew for this evening. The smoke bomb was ignited by a protester. (AP Photo/Steve Helber)

In downtown Los Angeles, a police SUV accelerated into several protesters in a street, knocking two people to the ground. The pair got up and ran onto the sidewalk.

Nearby in Santa Monica, not far from a peaceful demonstration, a group broke into a Gap and a Vans sneaker store, where people walked out with boxes of shoes. Others shattered the windows of an REI outdoor supply store and snatched folding chairs, a bike and backpacks. A fire broke out at a restaurant across the street.

About 30 miles (48 kilometers) south, as hundreds of protesters gathered in Long Beach, scores of thieves swarmed into nearby outlet stores. A steady stream emerged from a Forever 21 store carrying armloads of clothing. Some hauled it away in garbage bags, and a few stopped outside to change into stolen items.

In Minneapolis, the officer who pressed his knee onto Floyd's neck has been charged with murder, but protesters are demanding the other three officers at the scene be prosecuted. All four were fired.

“We’re not done,” said Darnella Wade, an organizer for Black Lives Matter in neighboring St. Paul, where thousands gathered peacefully in front of the state Capitol as state patrolmen and National Guard soldiers lined up in front of about a dozen military-style armored vehicles. "They sent us the military, and we only asked them for arrests.”

Minnesota Gov. Tim Walz brought in thousands of National Guard soldiers on Saturday to help quell violence that had damaged or destroyed hundreds of buildings in Minneapolis over days of protests. That appeared to help minimize unrest both Saturday and Sunday. 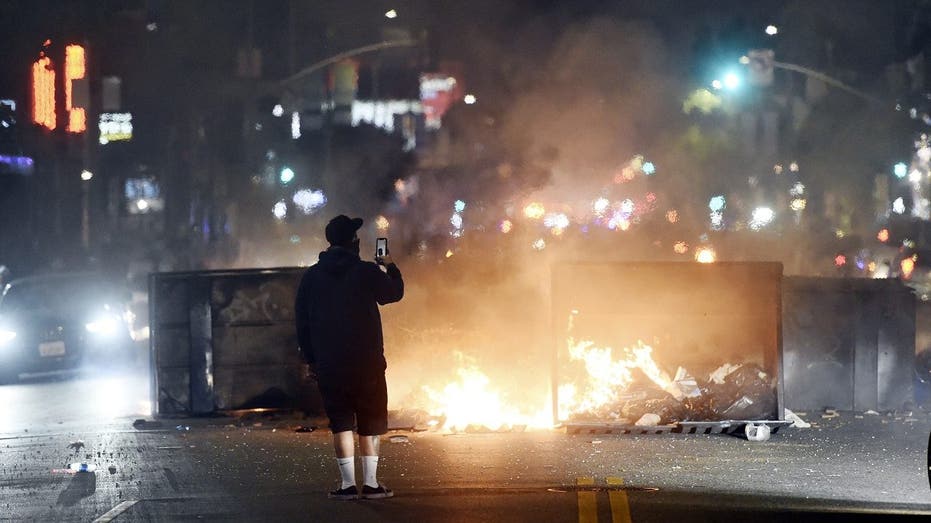 A man films himself in front of a fire in the middle of Melrose Avenue, Saturday, May 30, 2020, in Los Angeles. Protests were held in U.S. cities over the death of George Floyd, a black man who died after being restrained by Minneapolis police office

Disgust over generations of racism in a country founded by slaveholders combined with a string of recent racially charged killings to stoke the anger. Adding to that was angst from months of lockdowns brought on by the coronavirus pandemic, which has disproportionately hurt communities of color, not only in terms of infections but in job losses and economic stress.

The droves of people congregating for demonstrations threatened to trigger new outbreaks, a fact overshadowed by the boiling tensions.

The scale of the coast-to-coast protests rivaled the historic demonstrations of the civil rights and Vietnam War eras.

Curfews were imposed in major cities around the U.S., including Atlanta, Chicago, Denver, Los Angeles, San Francisco and Seattle. About 5,000 National Guard soldiers and airmen were activated in 15 states and Washington, D.C.

In Indianapolis, two people were reported dead in bursts of downtown violence this weekend, adding to deaths reported in Detroit and Minneapolis in recent days.

At the Minneapolis intersection where Floyd was killed, people gathered with brooms and flowers, saying it was important to protect what they called a “sacred space.”

Among in Minneapolis was Michael Brown Sr., the father of Michael Brown, whose killing by a police officer in Ferguson, Missouri, set off unrest in 2014.