Less than 100 metres from the Anglican church on Boigu Island in the Torres Strait sits a sacred place where the local population conducted ceremonies for thousands of years. But not any more – it is now completely under water. 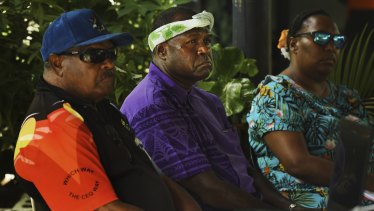 Reverend Stanley Marama (centre) during the Mabo Day event on Boigu Island in the Torres Strait on June 3. Credit:Kate Geraghty

He says a recently constructed sea wall will help stem the tide, but only for so long.

“The sea wall is only a Band-Aid, the water is still coming in. And I want to see from our perspective the water stop completely from coming into our community.”

Marama is one of eight claimants in a landmark action submitted to the United Nations, which claims the Australian government has violated their fundamental human rights by failing to adequately address climate change.

As the UN’s Human Rights Committee prepares to hand down its findings as early as next month, members of the Torres Strait Eight want the federal government to act now. 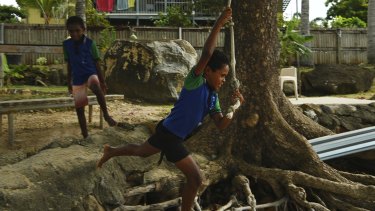 Dereece Cook swings on a rope tied to a tree at his home on the foreshore of Thursday Island watched by his brother Traquiin Cook.Credit:Kate Geraghty

Marama says he fears the 270 residents of Boigu Island will be forced to relocate within his lifetime. 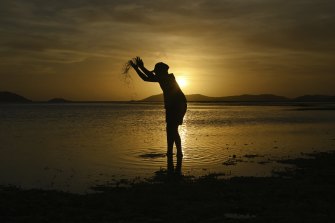 The Australian government is rejecting the complaint on the grounds that it cannot be held individually responsible for climate change because it is a global problem.

Southeast of Boigu lies Warrior Island – or “Tudu” Island in the traditional language.

No one lives on Warrior Island anymore, but there are graves situated throughout which are now being flooded.

Ned David, 55, lives on the main administrative hub of Thursday Island, but his family is from Warrior. He may have been one of the last people to properly live on the island – when he camped there for four months in the late 1990s.

“A lot of our ancestors are buried in part of the island and they get washed away,” he says.

David, chair of the Gur A Baradharaw Kod (GBK) Sea and Land Council, which is the coordinating body for the traditional owners of the Torres Strait region, was integral in organising the UN claim. Weeks after the 29th anniversary of the landmark Mabo decision in the High Court, David says the history of Torres Strait Islanders shows they are regularly forced to turn to the justice system to get their message across.

“I just think we need to shine a light on the First Nations people who are more vulnerable than any other group in Australia. I sincerely believe that,” he says.

David would like Prime Minister Scott Morrison to visit the Torres Strait to discuss climate change and rising sea levels saying he would prefer a “collaborative” approach, rather than an “adversarial” one.

He says Australia needs to commit to a target to achieve net zero emissions by 2050, but his islands face a more immediate problem. 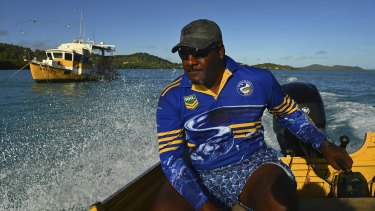 Fishermen in the Torres Strait such as Stanley Cook Jnr say they have noticed a significant change in the weather patterns in their lifetime.Credit:Kate Geraghty

As a child, David remembers body surfing every afternoon on Bach Beach, on Thursday Island. His children don’t believe him.

“As I got older we started noticing stuff – the northwesterly, the monsoon, it didn’t seem to gel with how we grew up as kids,” he says.

Thursday resident Stanley Cook snr, a keen fisherman and gardener, says when he was a child the rainy season was October, November and December and it came without fail. 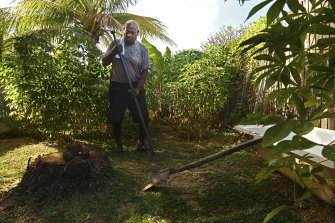 Stanley Cook prepares to dig a hole to plant taro in the backyard of his home on the coastline on Thursday Island.Credit:Kate Geraghty

“Now we get the rain late, January or February. But it’s all over the place,” he says. “Before that, we could tell the wind, the tides and the weather – now we can’t. We’re just guessing.“

At the moment, the rising tide is the only constant.