An unidentified enthusiast bid an astronomical $28 million Saturday to win an online auction for a seat aboard a New Shepard spacecraft and a chance to make history next month, joining rocket owner and Amazon founder Jeff Bezos for a commercial flight to space.

Bidding for the 10- to 12-minute sub-orbital flight started at $4.8 million. In less than two minutes it shot up to $10 million, doubling to $20 million one minute and 10 seconds after that. The $28 million winning bid was accepted a little more than six minutes after the auction’s final round began.

“Going three times… and that is sold! Twenty-eight million dollars to number 107!” auctioneer Steve Little announced with a flourish.

Bezos’ rocket company, Blue Origin, said in a tweet that the winner’s name will be released in the weeks after the auction. The company added, “Then, the fourth and final crew member will be announced — stay tuned.”

The name of the auction winner will be released in the weeks following the auction’s conclusion. Then, the fourth and final crew member will be announced – stay tuned.

Blue Origin’s six-seat New Shepard capsule will carry Bezos, his brother Mark, the not-yet-identified auction winner and one other passenger on a short, up-and-down flight to the lower reaches of space on July 20, the 52nd anniversary of the Apollo 11 moon landing.

Launching from a company test facility near Van Horn, Texas, the reusable, single-stage New Shepard rocket will boost the crew capsule to an altitude just above 62 miles, the internationally recognized “boundary” of space, before it arcs over for a parachute descent back to Earth.

Bezos and his crewmates will experience about three minutes of weightlessness near the top of the trajectory, enjoying spectacular views of Earth from six windows the company says are the largest ever flown in space.

Blue Origin announced the auction May 5, a dramatic way of revealing the company was finally ready to begin carrying passengers to space after 15 successful unpiloted test flights. One month later, on June 7, Bezos announced on Instagram that he and his brother Mark would be joining the auction winner for the historic flight.

Nearly 7,600 people from 159 countries registered for the auction and the 20 top bidders, none identified, participated in the final round Saturday. A 6% fee was added to the winning bid. 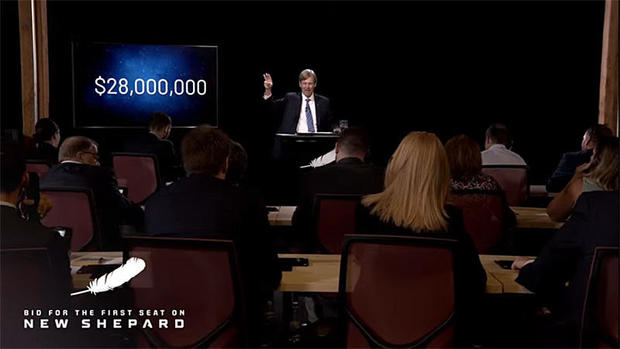 The proceeds will be donated to Blue Origin’s foundation, “Club for the Future,” which, the company said in an earlier release, aims to inspire “the next generation as they go off and think about millions of people living and working in space … which is precisely what Blue Origin’s vision is.”

Blue Origin has not yet announced what New Shepard seats will normally cost, but tickets are expected to run in the neighborhood of several hundred thousand dollars each.

Competing against fellow billionaires Richard Branson and Elon Musk, Bezos has said he spends a billion dollars a year funding Blue Origin and the development of sub-orbital spacecraft for commercial, up-and-down trips to space as well as larger, more powerful boosters to launch satellites, and eventually people, to orbit and beyond. 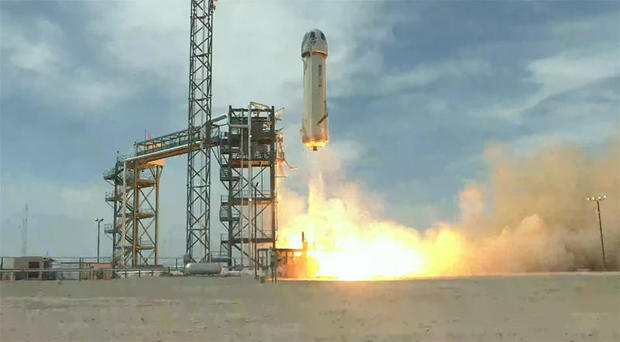 The upcoming New Shepard flight is expected to be the first carrying purely civilian passengers to space aboard a commercially built spacecraft without company or government pilots on board.

While civilians have flown as guests or paying passengers on U.S. and Russian spacecraft in the past, those missions were government sponsored and piloted by professional astronauts. Branson’s Virgin Galactic has launched company pilots and engineers to space on sub-orbital test flights, all of them civilians, but so far, no members of the public.

In the wake of Bezos’ announcement, there has been speculation Virgin Galactic might try to beat Blue Origin to the punch, launching Branson on a test flight over the July 4 holiday weekend.

But Bezos and Blue Origin presumably would still claim the distinction of launching the first truly commercial space flight, taking off with the first non-company, non-government passengers flying to space aboard a privately owned and operated spacecraft.

However the history books might record it, the Blue Origin flight is the culmination of a lifelong dream for Bezos and a dramatic way to demonstrate his faith in the safety of his company’s rocket and spacecraft, matching Branson’s long-stated goal of flying on his company’s spaceplane.

“You see the Earth from space, and it changes you, it changes your relationship with this planet, with humanity. It’s one Earth,” Bezos said in an Instagram post announcing his flight. “I want to go on this flight because it’s the thing I’ve wanted to do all my life. It’s an adventure. It’s a big deal for me. I invited my brother to come on this first flight because we’re closest friends.”