Two people are in hospital in England after being diagnosed with rare infections spread by a tick bite,

Health officials confirmed a case of babesiosis, caused by a parasite that infects red blood cells, and a likely case of tick-borne encephalitis (TBE), which affects the central nervous system.

This is the first record of a UK-acquired case of babesiosis and the second case of TBE being acquired in the UK, Public Health England (PHE) said.

PHE officials have revealed that cases of the infections are rare and the risk of being infected remains very low in the UK.

Both patients have been transferred to hospital where they are receiving appropriate treatment and are expected to make a full recovery, PHE said. 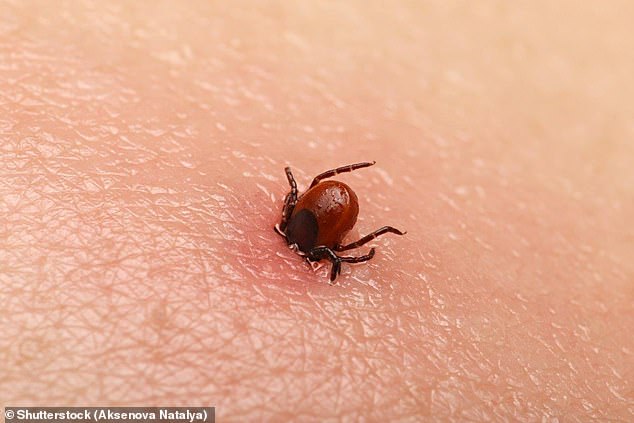 The B. venatorum parasite is spread by ticks (stock image) and was found on sheep in the Scottish Highlands

‘It is important to emphasise that cases of babesiosis and TBE in England are rare and the risk of being infected remains very low,’ said Dr Katherine Russell, consultant in the emerging infections and zoonoses team at PHE.

PHE has surveyed sites in Devon close to where the person with babesiosis lives, collecting and testing hundreds of ticks.

All have tested negative for the parasite that causes babesiosis.

PHE also tested deer blood samples from Hampshire in areas near where the person with probable TBE lives and they have shown evidence of likely TBE virus infection, which matches similar results found in 2019. 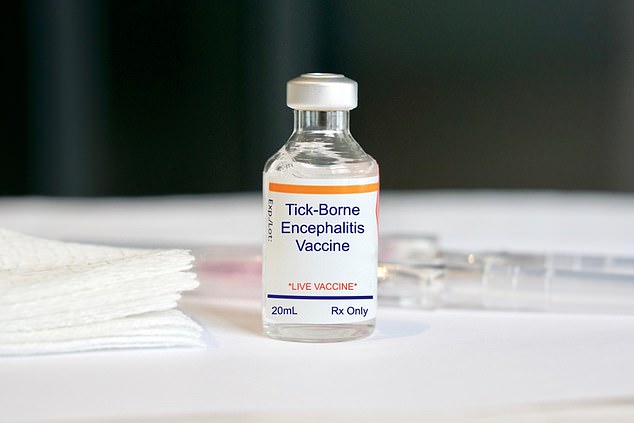 There’s a vaccine for TBE, although it is not available on the NHS. It costs about £65 per injection

Babesiosis is caused by microscopic parasites that infect red blood cells and is transmitted mainly by ticks.

The ticks become infected by feeding on infected cattle, roe deer and rodents, which are the main reservoirs for this parasite, according to the European Centre for Disease Prevention and Control.

‘While most infections pass by without symptoms, some people may become sick and present with flu-like symptoms like fever, chills, muscle ache, fatigue and jaundice – yellowing of the skin due to a bile disorder,’ ECDC said.

‘Severe cases, affecting the kidneys or the lungs, may occur and lead to death.’

TBE, meanwhile, attacks the central nervous system and can result in long-term neurological symptoms and even death.

It’s caused by the Flavivirus genus of virus and is transmitted by the bite of infected ticks, found in woodland habitats.

Around two-thirds of people with TBE infections will have no symptoms, and, for those who develop symptoms, there are often two phases.

The first is associated with flu-like symptoms such as fever, headache and fatigue, which can then progress to a more serious second phase which involves the central nervous system, which can lead to meningitis, encephalitis and paralysis.

Ticks that spread TBE can be found in most of Europe – including parts of England, Russia, China and Japan.

There’s a vaccine for TBE, although it is not available on the NHS.

No vaccine is available to protect people against babesiosis, however, making prevention tips all the more important.

PHE said the public needs to ‘be tick aware’ and take precautions such as keeping to footpaths, avoiding long grass while outdoors and wearing appropriate clothing.

The public should also consider the use of repellents containing diethyl toluamide (Deet) and making it a habit to carry out a ‘tick check’.

If anyone has been bitten by a tick, it should be removed as soon as possible using fine-tipped tweezers or a tick removal tool. 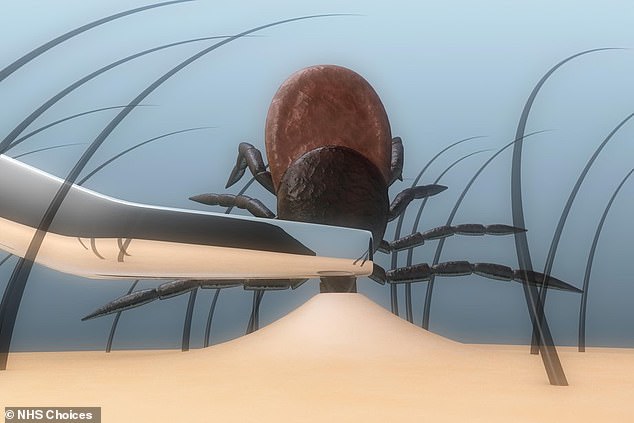 How to remove a tick: Use tweezers or a tick-removal tool to grasp the tick as close to the skin as possible (pictured), then slowly pull the tick upwards without crushing or breaking its body. Make sure all traces of the insect are gone then wash the wound

‘Ticks are most active between spring and autumn, so it is sensible to take some precautions to avoid being bitten when enjoying the outdoors,’ said Dr Russell.

‘Seek medical advice if you start to feel unwell after a tick bite.’

Many people with early symptoms of Lyme disease develop a circular red skin rash around a bite.

WHAT IS LYME DISEASE?

Lyme disease is caused by a bacteria that is transmitted to humans through the bite of infected black-legged ticks.

The most common symptoms of the disease are fever, headache, fatigue and a skin rash called erythema migrans.

The disease can typically be treated by several weeks of oral antibiotics.

But if left untreated, the infection can spread to the joints, heart and nervous symptoms and be deadly.

WHAT HAPPENS WHEN YOU ARE INFECTED?

During the first three to 30 days of infection, these symptoms may occur:

The rash occurs in approximately 80 per cent of infected people.

It can expand to up to 12 inches (30 cm), eventually clearing and giving off the appearance of a target or a ‘bull’s-eye’.

Later symptoms of Lyme disease include: