The Trump administration is taking steps toward a lease sale within the Arctic National Wildlife Refuge, an area President-elect Joe Biden has said he would move to protect from oil and gas drilling. Chad Padgett, state director for the U.S. Bureau of Land Management for Alaska, said hearing from industry on which tracts to make available “is vital in conducting a successful lease sale.”

The agency plans to make a formal call for nominations Tuesday. It said it also will seek comments on whether tract sizes should be reduced and whether any should receive special considerations.

The deadline for submitting nominations and comments will be Dec. 17, the agency said.

Alaska political leaders, including the state’s Republican congressional delegation, celebrated in 2017 the passage of legislation allowing for drilling within the refuge’s roughly 1.5 million-acre coastal plain, seeing it as a way to boost oil production, create jobs and generate royalties. Oil has long been Alaska’s economic lifeblood, though production is a fraction of what it was at its peak in the late 1980s.

The Gwich’in people have opposed development within the refuge, citing concerns on the impacts to the Porcupine Caribou Herd on which they have relied for subsistence. Conservation groups also have expressed opposition. 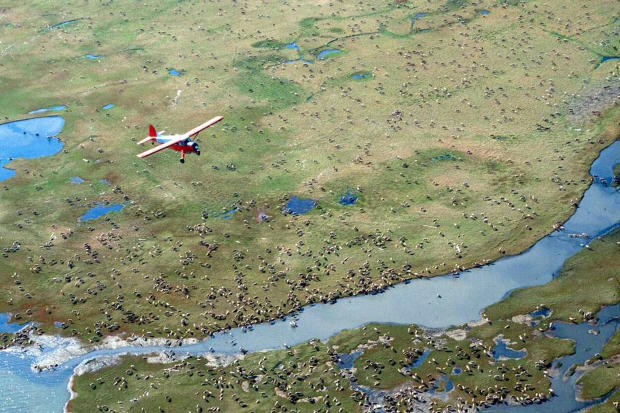 Bernadette Demientieff, executive director of Gwich’in Steering Committee, said the voices and concerns of indigenous people in the region are not being heard.

“But we’re not giving up. We’re not going to just allow people to come into our homeland, do whatever they want and stand idly by,” she said.

Mr. Biden, now the president elect, on his campaign website mentioned an intent to permanently protect the refuge. When someone publicly states an intent to provide protections, “you better believe the Gwich’in will hold them accountable to it,” Demientieff said.

Adam Kolton, executive director of the Alaska Wilderness League, said a lease sale is “one more box the Trump administration is trying to check off for its oil industry allies before vacating the White House in January.”

“Arctic Refuge drilling has never made sense from a climate change, human rights or wildlife protection perspective, and with continued volatility in oil markets and major U.S. and international banks unwilling to invest in Arctic oil, the economic argument no longer holds water either,” he said in a statement.

Kolton questioned whether the Trump administration, based on how the process normally works, would have time to hold a lease sale.

“So a new Biden administration could come in with tools at its disposal unwind this,” he said. “That said, we can’t take anything for granted.”

Kara Moriarty, president and CEO of the Alaska Oil and Gas Association, said she’s not sure what the level of interest in the refuge’s coastal plain is among companies because it’s not something companies publicly discuss for competitive reasons.

“We’ll wait to see what the reaction is from industry,” she said. “Obviously we’ve long supported having the opportunity to have lease sales on federal land whether it’s the coastal plain or not. We’ll wait to see how the process unfolds over the next 30 to 60 days.”

Last month, the Trump administration announced plans to lift restrictions on logging and building roads in Tongass National Forest. The Trump administration has reversed or rolled back more than 80 environmental rules and is in the process of reversing about 20 others, including climate policies and rules addressing clean air, water and wildlife, according to The New York Times.