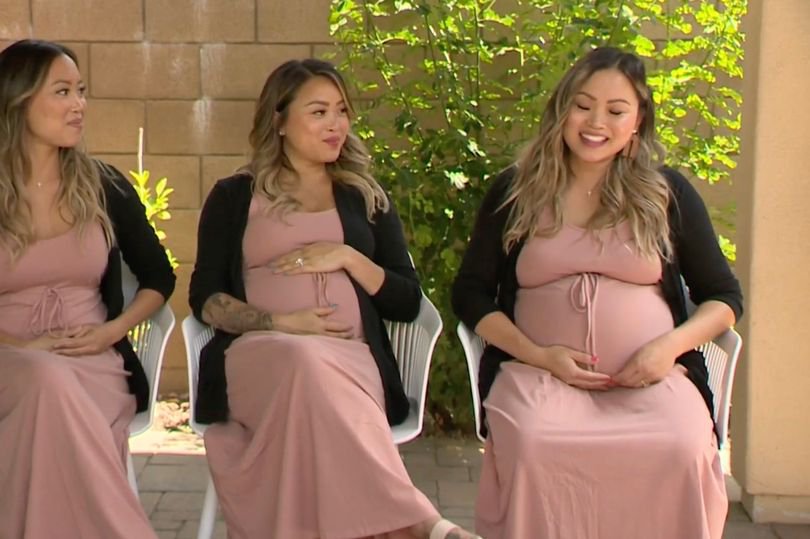 Triplets with an incredibly close bond are due to give birth within weeks of each other.

The siblings from Orange County, LA, were born just four minutes apart, and they are now ready to celebrate becoming mothers all around the same time.

Gina, Nina and Victoria will welcome their babies into the world babies over the next few months, and between them they are expecting two boys and a girl.

The sisters, 35, are expected to give birth in July, August and November and they are looking forward to being their for each other through the entire process.

‘Once we found out that Nina was pregnant, we encouraged Gina,’ Victoria – the youngest triplet – told CBS Los Angeles.

Gina adds: ‘I’m actually the oldest by four minutes and I’m having a girl and her name is Leighton Grace.’

Nina has already picked her boy’s name too.

‘I’m in the middle by four minutes and I’m having a boy and his name is Hendrix Paul,’ she says.

Victoria, who is also having a boy, says she has chosen the name Zaden Seth

The expecting sisters say they won’t leave the house unless they are wearing matching outfits and they are now sharing maternity clothes.

The trio will all deliver their children at The Women’s Hospital at Memorial Care Saddleback Medical in Laguna Hills in the months ahead.

We’re sure they are going to be an incredibly tight-knit family.

Do you have a story to share? We want to hear from you.

Get in touch: [email protected]