Traveller dad takes his daughter, 10, ferreting for wild rabbits and teaches her how to gut her kill as he boasts she is ‘not squeamish’ on Here Come The Gypsies

A traveller dad who wants to raise his children according to tradition taught his daughter how to hunt and gut rabbits in the wild.

Lee Hughes, a horse dentist from a traveller community in Dorset, talked his daughter Mia, ten, through a very important family tradition as he took her on a rabbit hunt on last night’s Here Come the Gypsies on Channel 5.

The father-of-two said he wanted to teach Mia to ‘live off the land’ because it’s an inportant skill.

Viewers were not impressed as father and daughter used a ferret on a leash to hunt and catch two rabbits, before Lee taught Mia how to gut them, claiming the youngster would be ‘traumatised’ by the experience.

Hunting hares or rabbits with a ferret is only legal in the UK on your own land. Doing it on property that doesn’t belong to you is considered poaching and is illegal. 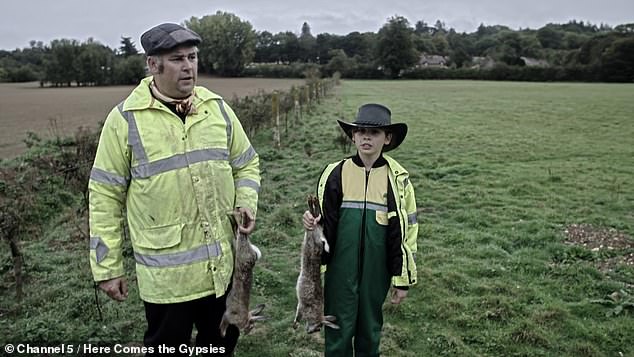 Lee Hughes, a horse dentist from a traveller community in Dorset, took his daughter Mia, 10,  on a controversial rabbit hunt on last night’s Here Come the Gypsies on Channel 5 (pictured)

Lee raises Mia traditionally, and starts the day by grooming her hair, which, in keeping with traveller tradition, is long enough to reach down to her knees.

‘That’s what you call some hair, and it’s heavy too,’ he said proudly, holding Mia’s hair, saying it would be no shorter than 44 inches.

The dad revealed Mia only got her split ends cut, adding that he’d rather ‘cut my arm off’ than see his daughter with shorter hair.

After grooming and tying Mia’s long mane into a braid, the father-of-two took his daughter and her brother Callum and cousin on a rabbit hunt. Lee said the family hunt for food and didn’t rely on supermarkets, and that it was an important traveller value

In order to stalk rabbit warrens, the family used a a ferret called Sally, who they keep in a cage at home.

It was off to a rocky start for Lee, who was bitten by Sally as he took her out her cage, but he brushed off the wound, dousing it with some alcohol before getting on his way.

‘We still hunt our food, we live off the land, we don’t buy our meat, and we only take what we need,’ he said.

‘This is me girl’s first time. She used to be a bit young to see a rabbit being killed, but she understands now it’s something you got to do,’ he added.

Mia was enthusiastic about the idea of going on the hunt with her father. She said:  ‘I’m quite far off now, but I got to start from somewhere and my dad has been teaching me a lot since I turned ten. 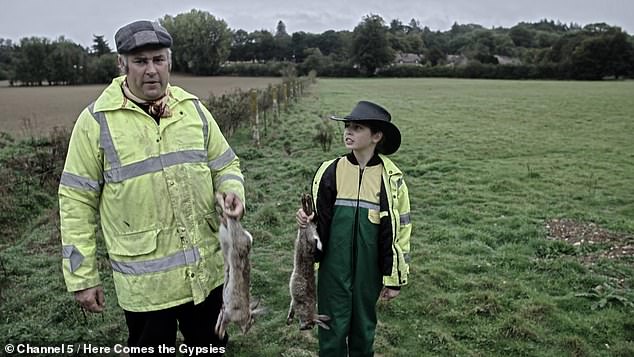 Enthusiastic Mia, right, was happy to make her father proud on their family hunt, after gutting a rabbit

The family drove to a field to stalk rabbits with the help of Sally.

‘It’s important to teach her,’ he said, before adding some people don’t agree with the practice.

Mia helped Lee set the trap, but the ferret could not find a single rabbit in the warren.

‘It seems to me someone could have been in here, cause I could have sworn there was a rabbit in there, but the ferret won’t lie,’ Lee said, before the family changed location.

‘It’s important to teach these children who to live off the land. You’d get some kids that wouldn’t know what to do, if you took them here, they’d laugh, they wouldn’t have a clue.’ 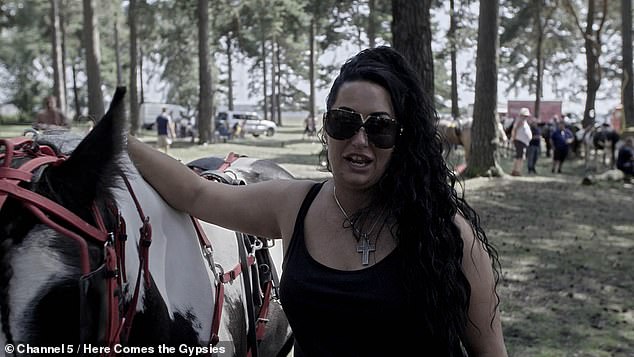 Meanwhile, at a travellers horse fair, horse dealer Sophie, pictured, hoped to sell a horse to another woman

Is hunting rabbits with ferrets legal?

Hunting rabbits and hares with ferrets – also known as ferreting – is legal in the UK on private property under the Ground Game Act of 1880.

The law state that the person legally occupying the land has limited right to kill and take rabbits, and can give anyone on their land the right to do so.

The rabbits can be killed through legal methods, including ferreting as well as gassing, trapping, shooting, snaring or netting.

Under the Ground Game Act, the land occupier is exempt from holding a licence to kill rabbits.

Hunting or stepping onto land that doesn’t belong to you is considered trespassing in the UK.

According to section 30  of the Game Act of 1831 (England & Wales), it is illegal to trespass onto any land in search of game, woodcock, snipe or rabbits.

‘I love going out with dad because he teaches me a lot, it’s really important to make my dad proud, if I don’t, I know I haven’t learned quite as much, but it feels nice to make him happy,’ Mia said.

After stalking the field for another rabbit hole, first-timer Mia spotted one, and Lee caught it, before pulling its neck.

But the rite of passage wasn’t complete for the young girl, who had to do one last task.

‘All traveller children should learn this way of life and should be able to learn how to gut a rabbit, and not be squeamish about it,’ Lee said.

Holding the dead rabbit by its head, the father-of-two instructed his ten-year-old on how to gut the animal, before telling her to throw its insides away.

‘That’s how we teach them how to look after themselves, and she’s not squeamish, as you can see,’ he said while Mia wiped her hands on the grass.

‘It was my first time and I enjoyed it a lot,’ she said, adding she’d definitely do it again.

‘Because if I was stuck out here, I’d know how to catch my food here,’ she said.

‘This a traditional thing, this is how we live off the land. Some people might call it cruel, but we’re not wasting them and we’re doing it for survival,’ he said.

He added they’d make a ‘good stew’ out of the rabbits, that would last them for several days.

However, viewers were not too impressed with this family hunting trip. Some said they could have just gone to their local supermarket.

‘For survival. is stretching it a bit,’ one said.

‘They just go trespassing and hunt where they want, illegally,’ said another.

‘All that messing about to catch a rabbit … just go to Tesco and buy a chicken,’ one joked. Sophie, pictured with her friend Chanel, left, said horse dealing was more of a man’s game, but that more women were getting involved

‘If killing rabbits that don’t belong to you makes your day proud then he’s not worth it,’ said another.

‘Great he’s going to kill rabbits and traumatise his daughter,’ another said.

Meanwhile, at a horse fair in Hampshire, organised in a local traveller family’s farm, new horse dealer Sophie was hoping to sell one of her steeds.

‘I’ve had horses all me life, but driving is a man’s game, not a woman’s game,’ she said.

‘Men normally go on with the horses and the women tend to stay at home with the children, cooking and cleaning. But more and more women are getting involved with it,’ she added.

Sophie, a mother-of-one, takes the horse to the fair to showcase it, and is sure to strike with her ‘woman’s touch,’ thanks to her female horse. Sophie, pictured, eventually sold a horse to another woman at the fair, pictured,  for a price she was happy with 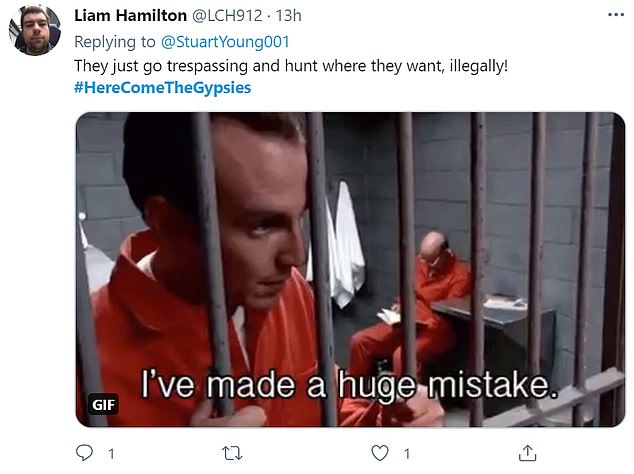 Viewers were not impressed with the illegal hunt, and some said the family could just get food at the local supermarkets

‘She goes more to a woman than a man, it’s definitely a woman’s touch, it’s a woman’s world now,’ she joked.

‘We’re hitting it for the women today,’ she added.

‘Me being a woman, I’ll sell it or try to sell it to another woman, but at the end of the day, I’ll sell to whoever can get me the best bit,’ she said.

The female horse she took to the farm was priced £5,250, and after a woman spotted her at the fair, Sophie is hoping to make a good sell.

The unnamed woman inspected the hooves, teeth and hair of the horse, before agreeing on an offer.

‘It used to be that woman wouldn’t buy horses, it was always the man, but it’s good that we’re today able to do the deal woman-to-women, woman power, we’re doing it now,’ she said

Here Come the Gypsies airs on Wednesdays on Channel 5.