A TIKTOK user has been banned from an airline after he posted a "hack" on how to get free baggage while travelling.

User RobKAllDay shared a video on his social media channel on how to get away with a free suitcase when travelling with Spirit Airlines. 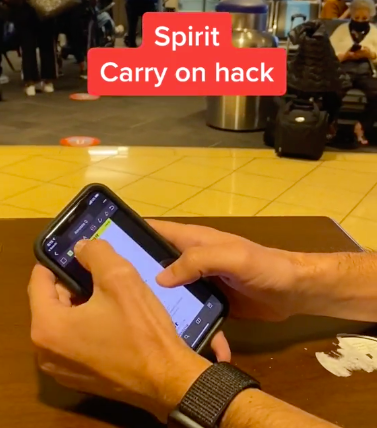 Passengers travelling with the US airline are not allowed a free bag in the cabin, and have to pay for it.

He first uploaded a video of his so-called “hack” in September.

In the clip, he can be seen manipulating what appears to be the “carry-on bag” section of his digital boarding pass to read “1” instead of the “0” that was previously printed on his ticket.

In the caption, however, Rob K claims he “didn’t actually” go through with the scheme, despite demonstrating it for his 180,000-plus followers. 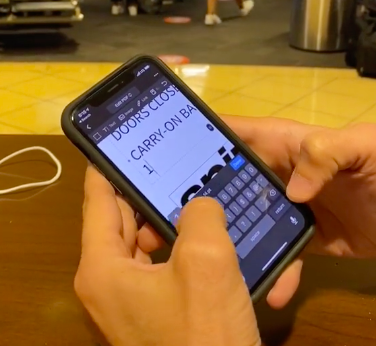 Nevertheless, Rob K. later claimed that Spirit sent him a letter confirming that he was banned from flying with the carrier for at least two years.

“As you know you created a video on the social media platform ‘TikTok’ showing users how to manipulate a Spirit Airlines boarding pass and fraudulently indicate they paid for a carry-on bag to the financial detriment of Spirit Airlines,” the letter begins, per Rob K’s most recent TikTok video.

“Additionally, as evidenced in the video’s comments, you have also been advising users specifically on what cell phone application should download to carry out the scam.”

For his alleged infractions, Rob K had not only been banned from flying with the airline, but also banned from entering any of “Spirit’s facilities,” with Spirit promising to call law enforcement if he should try to trespass. 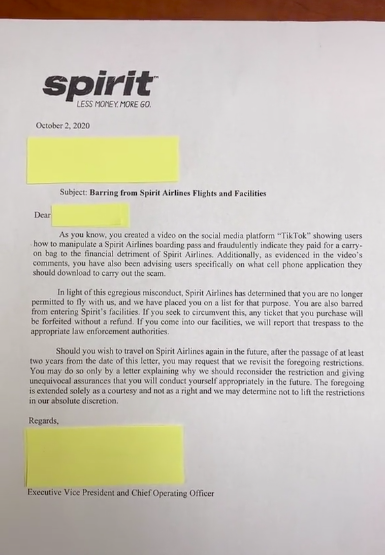 The letter also indicated that if Rob K. were to try and buy a Spirit Airlines ticket, it would be cancelled and he would not be refunded.

The carrier did say, however, that he would be able to request Spirit reconsider in two years’ time, and only after promising (via a letter) that he would give “unequivocal assurances that you will conduct yourself appropriately," according to Rob K's video.

Rob K. himself didn't appear to think much of it, calling the airline a “Bunch of babies.

Another TikTok user, who works as a flight attendant, shared her top hotel and safety hacks.

A travel blogger shared a secret room at her hotel on TikTok, accessed through the bookcase, to reveal a huge library.

One woman was praised for her reaction on TikTok after a baby hit her on the arm throughout a flight – only for the passenger to find it hilarious.

A version of this article was originally posted by Fox News and has been reproduced with permission.