The cast of ‘Queer Eye For The Straight Guy’ came together to give Jai Rodriguez a makeover for his 40th birthday! Thom Filicia spoke to HL about the epic reunion.

Oh my gosh, they’re back again! Thom Filicia, Ted Allen, Carson Kressley, Kyan Douglas and Jai Rodriguez, aka the Original Fab 5, are reuniting to give one of their own a makeover in an E! Reunion Road Trip special. Almost 20 years after Queer Eye for the Straight Guy premiered on Bravo, the cast is coming together to celebrate Jai’s 40th birthday and giving him a surprisingly much-needed makeover. “Jai was always like our little brother, he is about 10 years younger than most of us and we always sort of joked about him being our little brother and definitely treated him that way. So now that he was turning 40, we all felt like it was our obligation and we wanted to make sure he had a proper 4-0 celebration from his Queer Eye brothers,” interior designer Thom Filicia admitted on the HollywoodLife Podcast. “It’s always great for us to reconnect, and we have these little reunions, but it’s very rare for all of us to get together, so this was really fun.”

Thom admitted it was “hilarious yet terrifying” to all be back together on set and miked up. “We’re all saying the most outlandish things,” he laughed. “When we’re together, we usually get a little outrageous! So it’s fun, but it’s also scary because we all go back to like literally being in our 20s and 30s again.” In the preview for the reunion, which airs on E! on June 17th at 9 PM ET, Jai sends fashion guru Carson into a tizzy when going through is closet. “He had a lot of mesh,” Thom revealed. “It was the craziest closet I’ve seen in my life! I think they were hopefully scare Carson more than anything.”

When Queer Eye For The Straight Guy premiered in 2003, the world was in a much different place, especially when it came to conversations about the LGBTQIA+ community and its representation in media. While we have certainly come a long way, there is still work to do. However, Queer Eye was one of the first mainstream ways the dialogue was open. “I think it really exceeded all of our expectations of what a little TV show like that could become” Thom admitted. “There was kind of this perfect storm of what was going on in the world at that point. There were things in media were changing in terms of people playing gay characters and actually gay people on television being recognized as gay. Gay marriage was happening.” 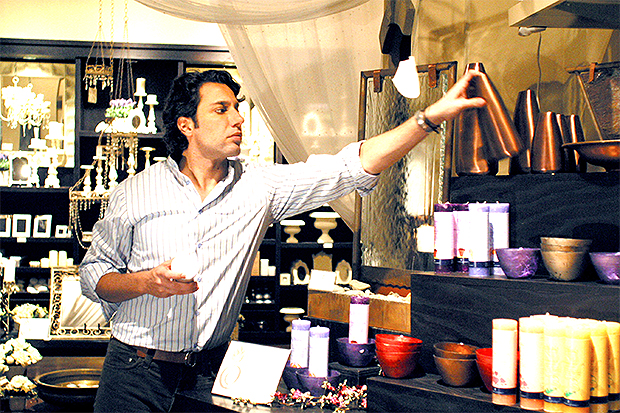 He continued, “I think what really made the magic for us was that we were natural. It was just the five of us representing ourselves and who we are. We had this great energy and a bond that was revolutionary and a new thing for people to see. It was a message that different can be good. Different can not only be good, but it can be instrumental and helpful.”

Tune in to Reunion Road Trip: Queer Eye for the Straight Guy, Thursday, June 17th on E! at 9 PM ET. And keep up with all of Thom’s interior design ventures via his Instagram.