He sat mesmerised when Ken Wallace won gold for Australia in Beijing – and now canoe sprinter Tom Green can create his own special Games memory as he stands on the cusp of the men’s K1 1000m final in his debut Olympics.

The 22-year-old, who is now coached by Wallace, grew up on the Gold Coast dreaming of being an ironman. Yet he has another torture test firmly on his mind after leading two Australian boats into Tuesday’s semi-finals at Sea Forest Waterway.

The junior world champion made light work of his first appearance at an Olympics, benefiting from some foxing from Belgium’s Artuur Peters, who throttled down and opted out of a battle for second with Green in their heat on Monday.

The pair were locked in a fight for second behind Czech Josef Dostal (3:37.342) – the first two boats went straight through to the semi-finals – until Peters eased down as Green powered away. Peters later qualified for the semi-finals when he comfortably won his repechage.

Green’s heat was the fastest of the five morning qualifiers and his overall time of 3:39.492 was the third quickest recorded overall.

“It was epic,” Green said. “It’s the first international race for quite some time and it’s quite warm. 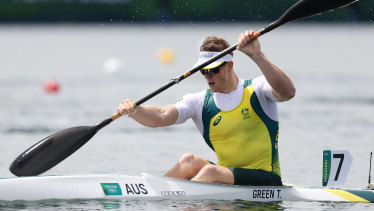 Tom Green cruised into the semi-finals of the men’s K1 1000m on Monday.Credit:Getty

“The race went well. I was trying to get straight through to the semi, which was top two. So I’m pretty happy with that. I couldn’t ask for anything more.

“I knew [Dostal] wasn’t going to let go the whole time, so I just tried to position myself well to stick in second. Josef is a very talented athlete and I knew if I could stay with him I’d be pretty good.”

Dostal is trying to become the second paddler to win a gold medal for Czech Republic in canoe sprint. Compatriot Martin Doktor won two golds at Atlanta in 1996.

I knew [Dostal] wasn’t going to let go the whole time, so I just tried to position myself well to stick in second

Green joined Australian teammate Jean van der Westhuyzen, 22, in the semi-finals after the South African-born paddler was third in his heat earlier this morning.

Van der Westhuyzen was then relegated to the repechage, but staved off a late challenge from France’s Etienne Hubert to win his quarter-final in 3:46.104. The top two progressed to the semi-finals.

Green and van der Westhuyzen, who was granted Australian citizenship during the Tokyo Olympic cycle, combined in the K4 500m to win the under-23 world championships two years ago.

Meanwhile, Australia’s two women’s K2 500m boats are also through to the semi-finals after both finished in the top four in their repechage. Alyssa Bull and Alyce Wood were a narrow second to a Slovenian duo with Jaime Roberts and Jo Brigden-Jones clocking in fourth in the same quarter-final.