Doctors are warning vaccine scepticism in Europe is filtering through to vulnerable Australians, especially those from migrant backgrounds, leading large numbers to refuse their COVID-19 jab.

Doubts also linger in religious communities, and the health department and Immigration Minister Alex Hawke have held talks with religious leaders to assure them of the vaccine’s safety and rigour.

But some observers of those discussions say more must be done to convince demographics that remain susceptible to misinformation. 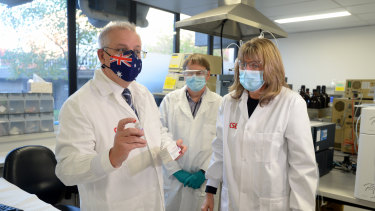 Former Australian Medical Association president Tony Bartone, a GP who visits aged care homes in Melbourne’s north-west, said about 20 per cent of his patients were hesitant about the vaccine or were refusing it altogether.

Dr Bartone is a member of the federal health department’s Culturally and Linguistically Diverse Communities COVID-19 Health Advisory Group, which aims to engage with multicultural groups about the vaccine and other issues.

Dr Bartone was especially concerned about elderly migrants receiving misinformation from their European countries of origin or next of kin. Many of his patients are from Italy, one of the nations which suspended the AstraZeneca rollout earlier this month amid blood clotting fears.

“They’ll happily say ‘oh yeah, I’ll have my flu jab’ but ‘oh no, I’ll pass on the COVID’,” he said. “They all watch their news service from back home. That’s unfortunately a very sad and sorry tale. That suspension by the European countries of the AstraZeneca rollout did more harm than good.

“There’s an increasing hesitancy and an increasing reluctance [and] concern about vaccination. It’s not the majority, not even 50-50, but it’s becoming increasingly notable.”

Mohammad Al-Khafaji, chief executive of the Federation of Ethnic Communities’ Councils of Australia, is also a member of the Culturally and Linguistically Diverse Communities COVID-19 Health Advisory Group. He has received feedback from aged care providers that as many as half of their residents are reluctant to get the vaccine.

He said he warned authorities about the influence of foreign language news coverage “a long time ago” and “the only option that’s now left is grassroots community action for this to be corrected”.

Western Sydney GP and former NSW Australian Medical Association president Kean-Seng Lim said that while the phenomenon was not widespread among his patients, he had seen increased vaccine hesitancy among some European communities.

“We have got some members whose main source of information is their family and friends from their country of origin,” Dr Lim said. “Depending on the reporting in those countries, that may lead to some vaccine hesitancy.”

On Thursday the Australian Technical Advisory Group on Immunisation released a statement to say there was “no evidence of a risk of thrombotic disease after COVID-19 vaccination in people with a history of clotting conditions”.

However, as a precautionary measure it recommended deferring vaccination for people with two specific rare blood clotting disorders.

Dr Bartone said he was able to persuade some of those who were hesitant about the vaccine “but there’s still a significant minority that says ‘no’.”

In a statement, the federal health department said it had a strategy to counter misinformation with “solid, evidence-based facts delivered by authoritative health experts”.

“The department will be working with all communities to ensure there is accurate information on the vaccines as part of the overall communications campaign,” they said.

A third member of the COVID-19 advisory group, sociology professor Andrew Jakubowicz from the University of Technology Sydney, said it was vital not to repeat last year’s “shameful” and baseless attacks on migrants for failing to get tested.

The Advisory Group conducted a roundtable with ethnic community leaders in early February and with 16 religious leaders in late February, including representatives of Christian churches. Mr Hawke spoke at the latter event.

A Catholic Church spokeswoman said no bishops or archbishops were involved, though they would be happy to participate.

While that was technically true, the US Centre for Disease Control stresses there is “no evidence that vaccination contributed to [those] deaths”. Mr Nile did not mention this; in fact, he described it as “a great human cost” of vaccination.

Mr Nile will also host a public seminar at NSW Parliament called “To Jab or Not to Jab: the Christian perspective”, featuring FamilyVoice Australia’s Greg Bondar. Mr Nile was not available for a phone interview due to hearing issues.

The federal health department said religious leaders were publicly supporting the vaccine among their congregations. The advisory group will meet again next month.