The way Lenny Parisi tells the story, when his grandfather Leonardo arrived in Cairns from Sicily in the years after World War I he was handed an axe.

“They told him to cut down the trees,” says Parisi, standing in warm, thick air by a swamp at the foot of one of his canefields at Fishery Falls, not far from where the Mulgrave River meets the Russell and the two flow together into the Coral Sea. 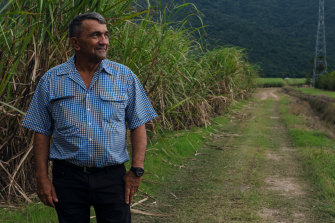 Len Parisi on his property near Cairns.Credit:James Brickwood

Old Leonardo did as he was told. He felled trees and later he cut cane and by the time the next war started he’d saved enough to buy the first of the five cane farms the family still holds on the fertile strip of flatlands between the ocean and the rainforests of the Bellenden Ker Range.

The family followed best practice, not just clearing the land of all non-productive vegetation and not only draining the swamps and marshes in the low country, but cutting deep watercourses between the fields to ensure that the tropical rain that swept down the flanks of the mountains was carried as quickly as possible across the land and dumped into the river.

As newly developed pesticides and fertilisers came on the market the family used them to kill bugs and promote growth. 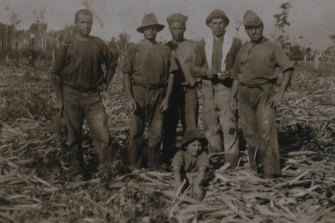 Leonardo Parisi with his workers around 1930.

Old Leonardo used to fish on the reef but, as far as Len knows, he was the first of the family to stick his head under the water in the early 1980s and see the wondrous reefs that the family lived alongside.

His neighbour Franco Arri took on him on his first dive after delivering an efficient Scuba briefing.

“Suck on this bit here and if the air stops coming out, come back up.”

“It was beautiful,” Parisi, 65, says today, remembering that first dazzling experience of the Great Barrier Reef. “It is amazing what we have out there.”

When scientists began to tell authorities that the sediment, nutrients and poisons washed out to sea by agriculture were killing the reef, the warnings made immediate sense to Parisi.

“There’s no time left to save the reef,” says Dr Lynise Wearne, director of Greening Australia’s Reef Aid project. “It has to be done now.”

Since 1990 about half the reef’s corals have been killed by oceanic heatwaves, with the three worst events occurring in the past five years.

The heatwaves are caused by global warming, but sections of the reef weakened by agricultural runoff are most susceptible to bleaching and least able to recover from it.

Australia has to work with the world to tackle global warming, says Dr Wearne, but it has to save the reef from runoff by itself.

Dr Wearne explains that sediment washed onto the reef prevents coral from growing through photosynthesis by blocking the sun as it clogs the reefs. Nutrients from fertilisers promote plague-sized outbreaks of Crown-of-thorns starfish that prey upon the coral.

For five years now Greening Australia, an environmental organisation funded by the federal and state governments as well as corporate and individual philanthropy, has been supporting projects to capture sediment and nutrient runoff in catchments along the reef through Reef Aid.

Working with landholders, traditional owners and environmental groups, the organisation has so far prevented an estimated 22,000 tonnes of sediment from reaching the reef by restoring 1750 hectares of gully and wetland area.

The goal is both to stop erosion at its source and to slow the water on its journey to the sea long enough for it to release sediment and nutrients on land.

By 2030 the group aims to prevent 724 tonnes of dissolved inorganic nitrogen from reaching the reef as well as 400,000 tonnes of sediment runoff, an objective the group’s chief executive Brendan Foran says will cost about $289 million.

A 2019 Australian government-funded costings report revealed a total of $4 billion was
needed to meet the agreed targets for sediment and nutrient pollution cuts – but less than a quarter of this has been committed by governments for the next five years.

“Without a major investment boost, Australian governments will not meet their commitment to provide the reef with clean water by 2025,” says Dr Wearne.

Work began on Parisi’s land after a chance encounter with a neighbour who was a member of the local LandCare Australia group in a supermarket near his home. The Mulgrave Landcare group is so active around Cairns over the years that it was running out of space for its projects. Did he have land they could plant on?

Parisi immediately offered up one of his lower fields, a soggy piece of land his grandfather had once cleared that had never been particularly productive. He thought the space might have been too large for the group to tackle, but it was exactly what they were after. 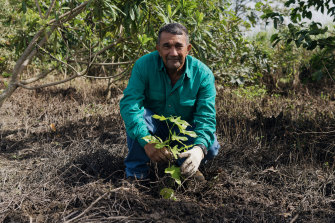 Len Parisi plants a tree on his land near Cairns. Credit:James Brickwood

With Greening Australia’s financial support the soils were tested and hydrologists designed a new wetland, with sediment ponds linked by streams running between the planting. Three years ago teams of volunteers began planting 10,500 over six hectares. The tallest are now four metres high, large enough to cast shade to block out weeds and survive competition in a new patch of rainforest.

Not all Parisi’s neighbours support his new passion, and indeed not all of his family does. Some consider it a waste of time and space, others in the region fear for the viability of cane mill should too much farming land be ceded to developers and tree-changers, so they are sensitive to environmental work too.

Parisi’s wife Grace reckons that she might have a better chance of getting Len to do yard work if she put a Greening Australia sign up in the front garden.

One neighbour who became intrigued with the project was Franco Arri who all those year ago took Parisi on his first dive. Arri saw the changes from above as he flew over in his ultralight and landed to see what was going on. Retiring from farming, he plans turn all his 80 hectares over to Greening Australia and Landcare eventually. Nearly four hectares have already been planted.

Guiding visitors around new wetland, taking care to warn of crocs, Parisi can name each of species now flourishing. He points out the dazzling flower of the golden penda and delights in a passing Ulysses butterfly with black with iridescent blue wings.

A flight of topknot pigeons wheels about overhead and Parisi explains how they range back and forth up to Papua New Guinea. An ecologist has counted 81 species of bird among the new trees.

These days landholders engaged in this sort of work now can apply for so-called Reef Credits, which work like carbon credits can create an income stream, but the scheme began after Parisi got started.

He says he is happy enough just to watch the land change under his care.

He likes the thought, he says, that he is replacing some of the trees that his grandfather once felled.

Nick O’Malley travelled to Cairns as a guest of Greening Australia.