Who is This Morning’s royally posh chef Clodagh McKenna? TV star, 45, engaged to the Queen’s godson, 62, puts her boho glamour stamp on their 300-year-old cottage in the grounds of Downton’s Highclere

Chef Clodagh McKenna hit the headlines this week after leaving This Morning viewers stunned while showing off her country home on the grounds of Highclere Castle.

Irish-born cook Clodagh, 45, lives in Hampshire’s Broadspear House, a 300-year-old cottage nestled on the grounds of Highclere Park, and is engaged to the Queen’s godson Harry Herbert, 62.

The low-key TV chef lives and works in the property, which was gifted to Harry Herbert by his father Lord Porchester, the 7th Earl of Carnarvon. He is the brother of George Herbert, the current Earl of Carnarvon.

But alongside her busy job and responsibilities, who is the 45-year-old nature-lover? 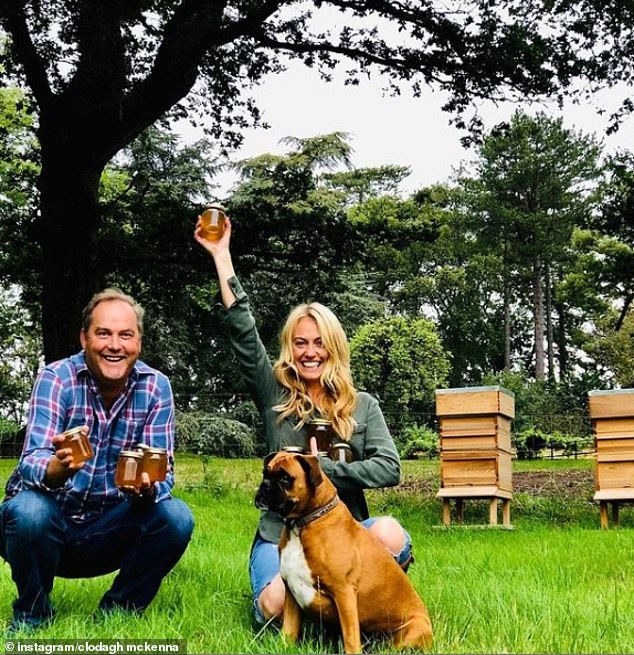 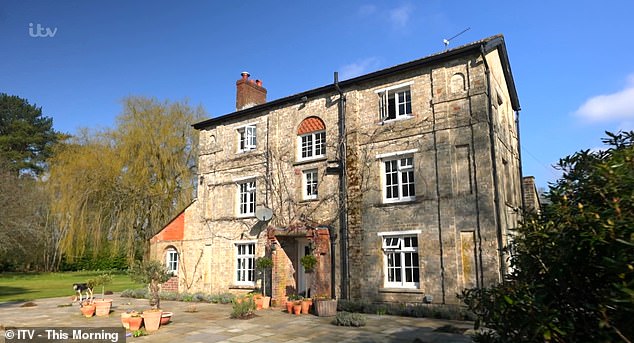 Clodagh lives in Hampshire’s Broadspear House, a 300-year-old cottage nestled on the grounds of Highclere Park 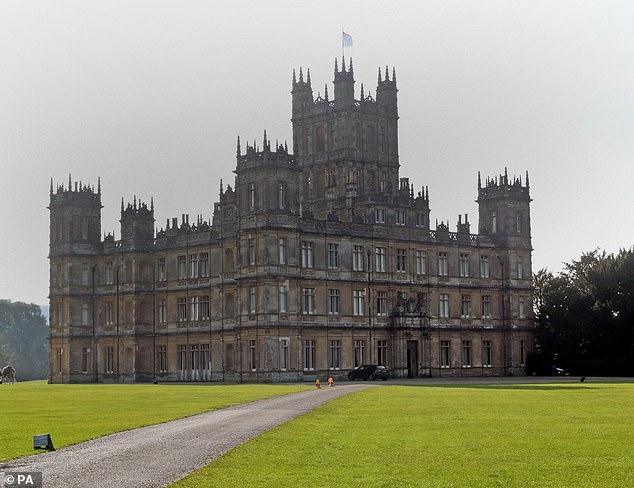 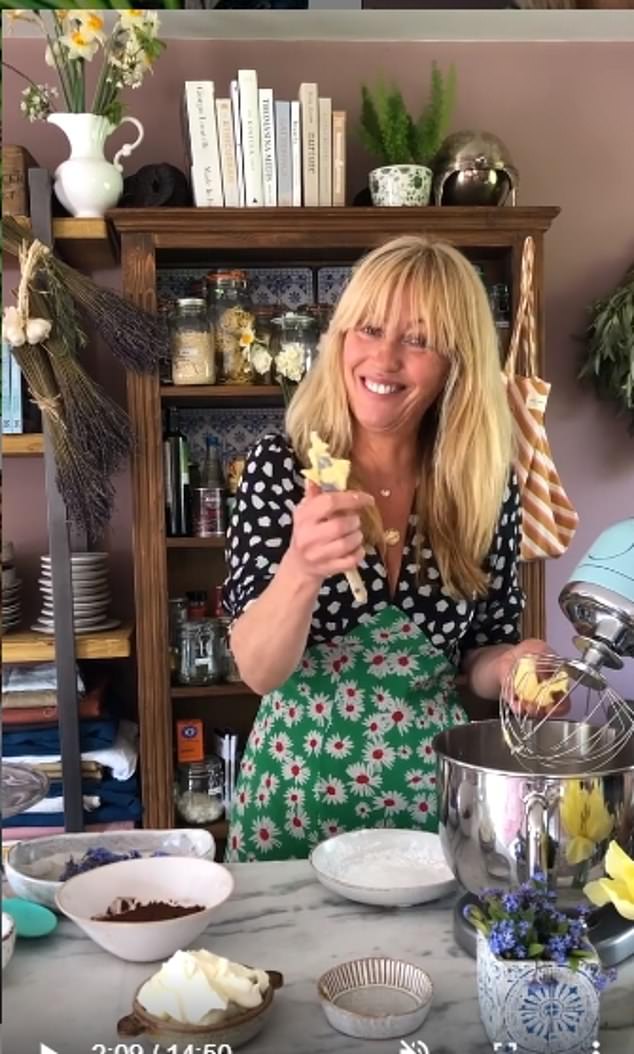 Clodagh whipping up a batch of brownies in a boho chic Rixo dress, with Insta-friendly touches such as a pastel KitchenAid and marble work surface

Appearing on the ITV show for her ‘Clodagh’s Kitchen Garden’ cooking segment earlier this week, the chef showed off the grounds of the beautiful home she shares with Harry and their two dogs Alfie and Nolly.

Showing viewers around her 60-acre garden, Clodagh said: ‘I live here with my wonderful fiancé Harry Herbert who was left this property by his father Lord Porchester, the 7th Earl of Carnarvon.

‘Harry and I share our home with our two adorable doggies.

‘The dogs fill my heart with joy and love but are also great for keeping me fit. We have 60 acres for them to run around and explore.’ 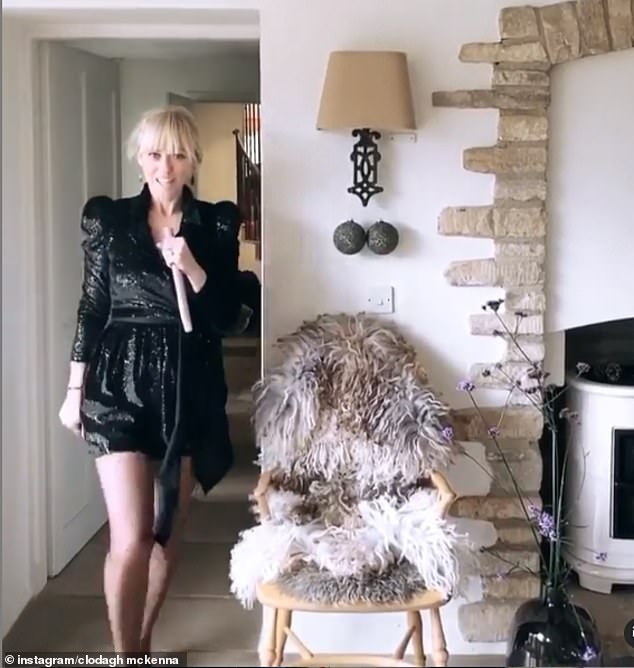 The chef regularly shares snaps of her stunning 300-year-old cottage online, with chic modern interiors and a huge kitchen garden 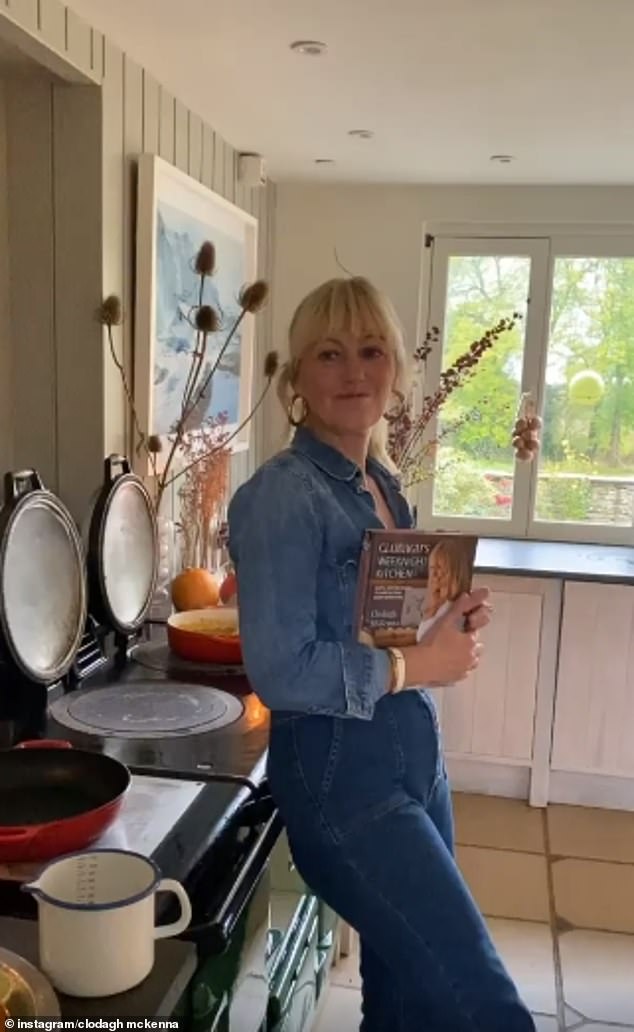 The Irish beauty recently posed for snaps in the kitchen of her stunning home, revealing a forest green Arga and soft pink counters 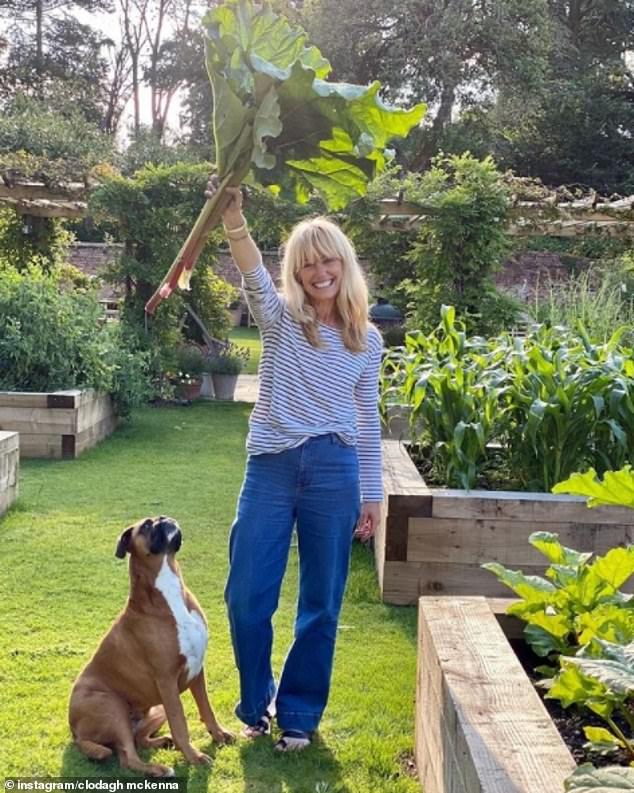 Clodagh McKenna hit the headlines yesterday after leaving This Morning viewers stunned while showing off her country home on the grounds of Highclere Castle – but who is the stunning 45-year-old TV chef?

Showing off the garden’s stunning landscapes, she went on: ‘This is such a magical spot, the dogs love coming out and chasing the wildlife.

‘Whenever I feel I need to be grounded I walk to this magnificent ancient leader tree, our last stop is the enchanted woodland.’

Harry’s family has owned Highclere Castle, where Downton Abbey was filmed, since the late 17th century.

The chef regularly shares snaps of her stunning 300-year-old cottage online, with chic modern interiors and a huge kitchen garden.

Snaps shared to Instagram reveal the neutral colour palette and Insta-friendly touches such as sheepskins and a traditional AGA.

Clodagh announced her engagement to Harry Herbert in October 2020 after meeting at a Fortnum & Mason lunch through mutual friends in 2017.

At the time, Harry described the meeting as a ‘sliding doors’ moment, having been single two years following a 25-year marriage, from which he has three children.

Announcing the engagement on Instagram, Clodagh shared a snap snuggled up with her partner, writing: ‘We got engaged! We are over the moon with happiness and thank everybody for the lovely warm wishes.’

Following the announcement she told The Today Show on RTÉ One: ‘We are so happy, we got engaged about six weeks ago. We moved in together about two and a half years ago.’ 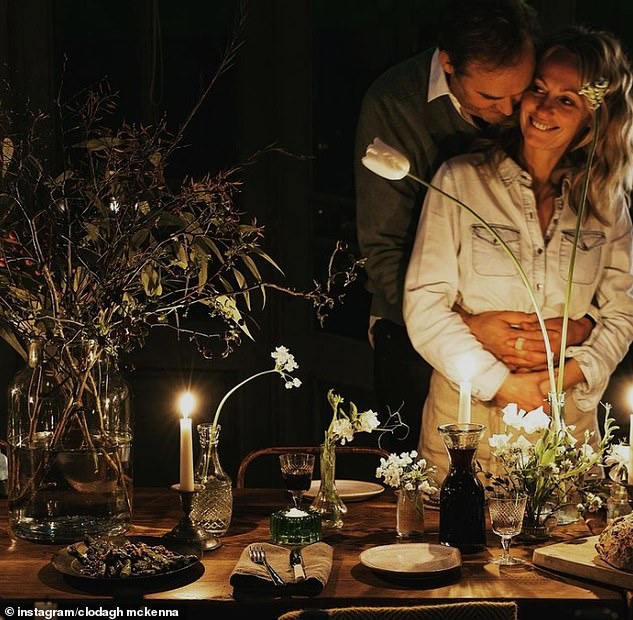 Announcing the engagement on Instagram, Clodagh shared a snap snuggled up with her partner and said she was ‘over the moon’

She added that she wants to wait to tie the knot until all the family can be together: ‘That is the most important thing.

‘Even if it’s just a table in the middle of the field and we’re all together – that’s what is important. We’re going to wait until next year, fingers crossed.’

Speaking to EVOKE, she previously lauded her fiancé for being ‘one of the kindest people’ she has ever met in her life.

‘He’s so lovely and he makes me be a better person. He’s made me the happiest I’ve ever been in my life. I’m so lucky.’ 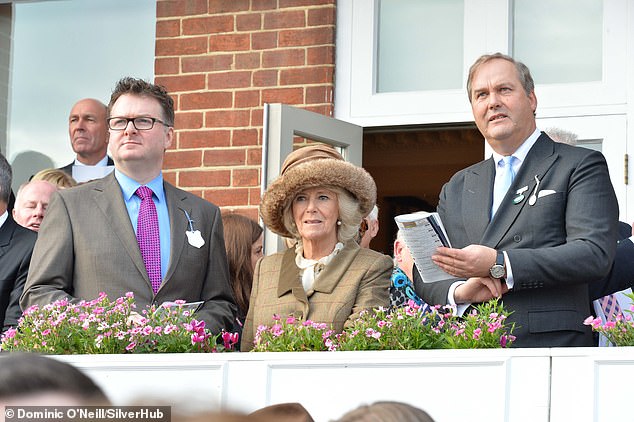 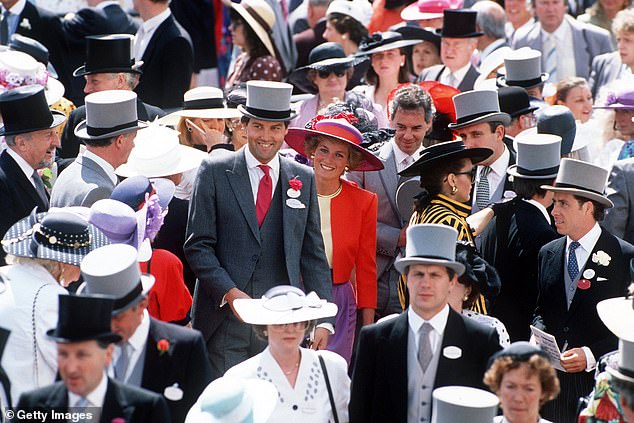 Old Etonian Harry has remained close to members of the royal family, and was also snapped at the races with the late Princess Diana (pictured in 1990)

Her Majesty reportedly called Henry ‘Porchie,’ affectionately based on his title, Lord Porchester and he is seen appearing in the first two seasons of The Crown played by Joseph Kloska.

A gregarious figure, Herbert is one of the biggest movers and shakers in horse racing. In addition to running the Highclere Thoroughbred Racing syndicate, he works for the Qatari royal family. His brother-in-law, John Warren, is the Queen’s racing manager.

Old Etonian Harry has remained close to members of the royal family, and has often been snapped at the races with the late Princess Diana and the Duchess of Cornwall. 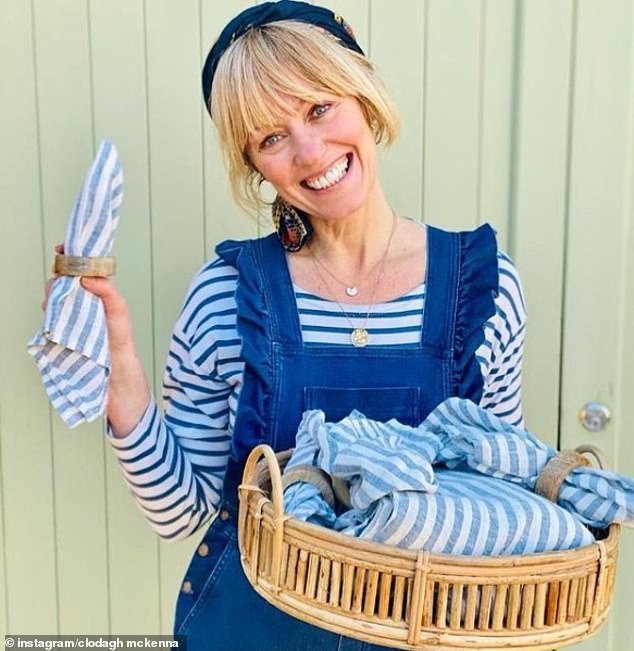 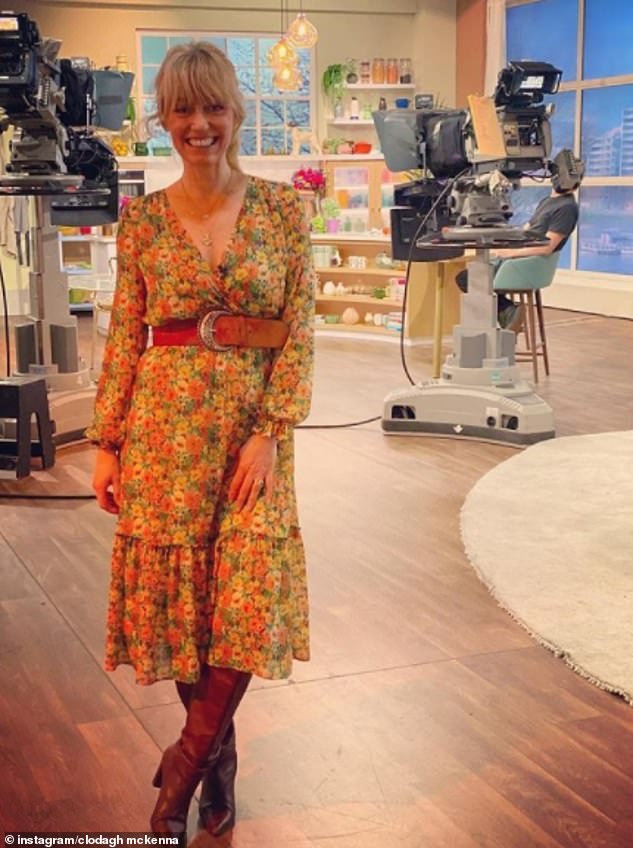 The stunning blonde has a clear love of fashion, and is often seen donning the latest trendy tea dresses and bohemian style tops with dungarees for her days out and about in the country.

She appears most at home in a pair of denim jeans, and often shares snaps on her Instagram page posing in slick flares and playful dungarees.

While Flora is based in Hampshire, she often posts snaps after travelling across the world for jetsetting adventures.

In January last year, she lapped up the sunshine in a gorgeous villa in the Maldives, while  in 2019 she was joined by Harry for a trek across the Big Horn Mountains in Wyoming. 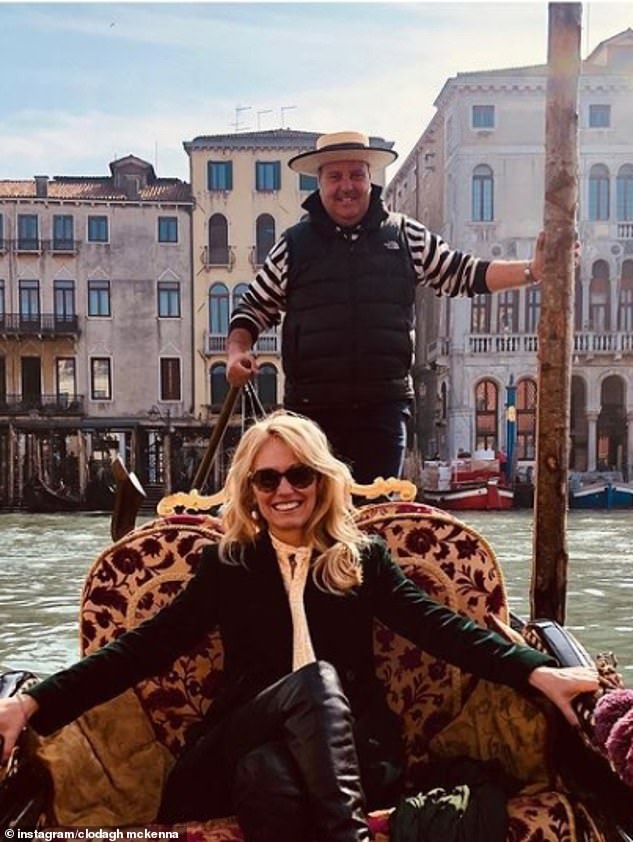 While Flora is based in Hampshire, she often posts snaps after travelling across the world for jetsetting adventures including Venice, Corfu and New York

The TV chef looked ever the natural as she posed atop a horse in a cowboy hat and boots during the ride, captioning one shot simply: ‘Heaven.’

In the months before the Covid-19 pandemic, the stunning blonde also wracked up the air mails, travelling to Venice, Corfu, New York and Australia in a matter of months.

Earlier this month, the TV chef broke down in tears live on This Morning as she revealed she has not seen her mother since the first lockdown.

While the TV chef lives in Hampshire, her mum is in Ireland, which is in a similar lockdown to the UK. 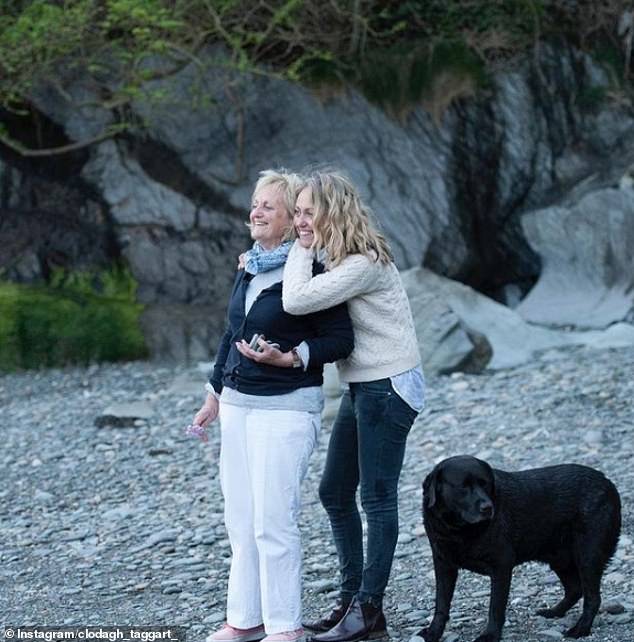 Earlier this month, the TV chef broke down in tears live on This Morning as she revealed she has not seen her mother since the first lockdown and spoke of their close bond (pictured together)

The cookbook author became emotional as she was reminded of her family while whipping up a St Patrick’s Day feast of smoked haddock and corn chowder.

She also recently shared an Instagram post dedicated to her mother, calling her ‘the woman I think of first and foremost’.

She wrote: ‘I think of all the things she has done in her lifetime, especially what she did in the 70’s and 80’s in Ireland to bring me to where I’m now as a woman in the world.

‘She raised 4 children whilst working full time to provide us with the best education that was possible.

‘She always put us first, and has always challenged my sisters and I as women to be the best possible versions of ourselves.

‘She made all her children feel like we could achieve anything and everything, growing up in a small town in Ireland she told us that the world was our oyster and we believed her!’

‘Still today I always push myself to be the best version of me because of how she taught me to think of myself as a woman. We as women are strong and we should always choose to challenge ourselves especially when it comes to standing up for what we truly believe in.’ 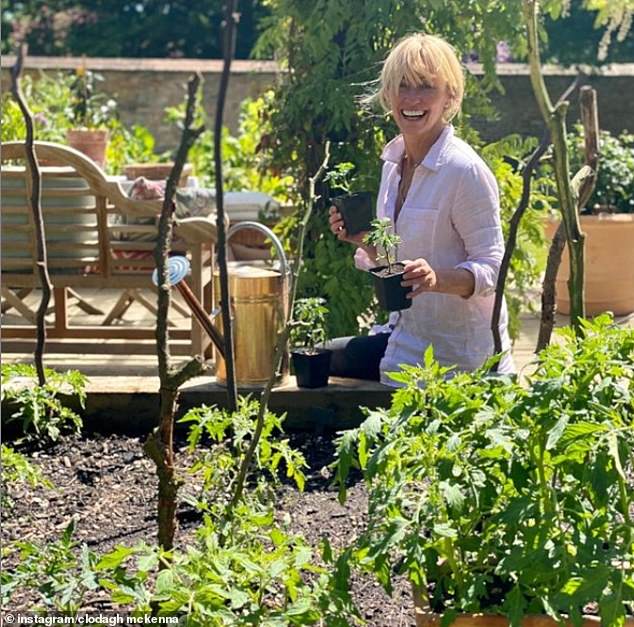 Chef Clodagh trained and worked at Ballymaloe Cookery School and House in County Cork and ran two restaurants in Dublin and Blackrock.

She has written multiple cookbooks and often appears on This Morning, Channel 4’s Sunday Brunch and Steph’s Packed Lunch.

But her skills go far beyond the kitchen, with Clodagh creating  a sustainable working homestead in the garden of her 60-acre property.

Speaking to The Times, she enthused about her passion for building a thriving ecosystem, saying: ‘I’ve always talked about the importance of being sustainable, but now I’m actually doing it.

‘It’s hard work, but it really makes me live every day in the present. Besides, I wouldn’t enjoy cooking a dish with ingredients flown in from everywhere. That’s why what we’re doing here feels so important.’