Spoiler alert: This story contains some details (but no major revelations) presented in Crime Scene: The Vanishing at the Cecil Hotel.

Crime Scene: The Vanishing at the Cecil Hotel is an arresting new docuseries that fans of the true-crime genre are flocking to. The four-part series was released on Netflix in Australia last Thursday and has since settled in the streaming platform’s top 10, sitting in the number one spot for two days. What’s the appeal? 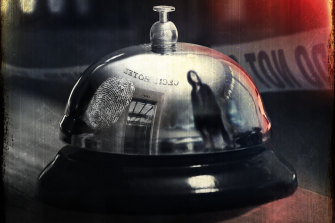 Australian viewers have sent Crime Scene: The Vanishing at the Cecil Hotel straight to the top of Netflix’s charts. Credit:Netflix

The series, directed by Joe Berlinger (Conversations with a Killer: The Ted Bundy Tapes) and executive produced by Ron Howard, delves into the 2013 disappearance of 21-year-old Elisa Lam, a Vancouver native traveling solo through California. She was last seen at the ramshackle Cecil Hotel in Los Angeles’ destitute and perilous Skid Row, where she was staying.

The hotel’s low rates and transient appeal drew addicts and violent guests including serial killer Richard Ramirez (known as The Night Stalker) and the mystery surrounding Lam’s disappearance there unfurls at a pace likely to keep the audience guessing and engaged until the final reveal.

The examination of the hotel’s seedy past, Lam’s mindset, earlier footage, and suspicions of eager web detectives will keep viewers clicking ‘next episode’. 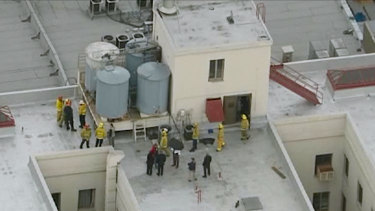 Firefighters and police officers on the Cecil Hotel roof in episode two of the series.Credit:Netflix

Lam also wrote about her bipolar disorder and thoughts of suicide. “A few good days followed by a week of sleeping. That is the pattern.” She also shared on the social media site that she had experienced a relapse: “It’s a vicious cycle, isn’t it?” she said of living with bipolar disorder. “I’m just so tired. So very tired. I don’t want to live like this.”

Security-camera footage captured by a hotel elevator shortly before Lam’s disappearance only intensifies confusion, raising questions about what could’ve caused her erratic behaviour. First, she steps into the empty elevator and punches buttons for several floors. Suspicious of why the door remains open, she sticks her head out of the elevator, and jerks it from side to side to investigate the hallway. She then shrinks into a corner of the elevator to hide herself. Then she repeatedly enters and exits the elevator. At one point makes large, odd gestures with her arms.

Journalist Josh Dean sums up the intrigue of the elevator footage perfectly in the docuseries: “You can’t help but wonder, why is she acting this way?’” When the video was released to the public it went viral, engrossing amateur sleuths who voiced suspicions of the LAPD and whether the elevator video had been manipulated.They formulated conspiracy theories and some inundated the inbox of the man they thought was responsible for Lam’s disappearance.

One amateur detective, John Sobhani, estimates he visited the Cecil at least 10 times over the years to better comprehend Lam’s time at the hotel.

But the ending of Vanishing is actually more like HBO’s limited drama series The Undoing. Sometimes the obvious answer is the real one.