Héloïse Letissier is familiar with isolation.

The artist, who goes by Christine and the Queens or Chris, spent a large portion of her youth in solitude. Losing herself in books and art, discovering who she was by spending time with only herself. 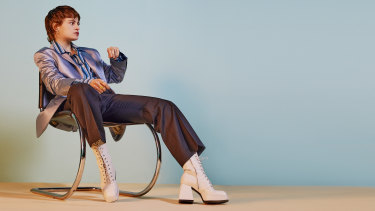 Christine and the Queens.

Now, like the rest of the world, she is in endless isolation. Alone in her Paris apartment, her only link to the outside world is through social media. It's a place she is comfortable.

“This is something I have known how to do since I was young, it actually reminds me of the situation I am in now. I was comfortable being lonely, escaping into music and books and art. I think it is important to do that,” she says.

“I think my youth bleeds into my life now. I think that time really created the relationship I have with the world… I am a huge believer that the teenage years are life-defining, and I think that is why I sit slightly as an outsider.”

Chris released her debut EP in 2011, but it was 2014’s studio album Chaleur humaine that put her on the global map. It hit Top Tens worldwide and landed on best-of lists in respected music publications, opening the door to prestigious festival sets and tours.

2018’s follow up album Chris beat Chaleur humane’s impact and demonstrated the chameleon she is as an artist, venturing into an even poppier territory and introducing the more performative aspects of her artistry both vocally and in her live shows. The mention on the Glastonbury line-up in 2016 became a headline set by 2019.

Now with time and solitude on her hands, Chris has time to reflect on what it all means.

The love of her fans is undeniable. After being one of the earliest artists to turn to live streaming during the pandemic, her regular Instagram Lives have gathered thousands of fans who listen to her chat, conduct Q&As, talk to other artists and, occasionally, sing. 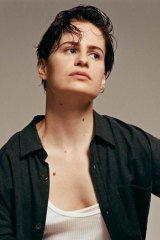 Despite being alone she is barely isolated.

“I have been talking to different people so much. We are experiencing this horrible thing together, it is actually making people talk more, I think. I spoke to five new people yesterday. That is a lot for me,” she says.

While she is coming to accept the love from others, finding love for herself has been a more complicated process. Her music has often explored themes of love; be it the unrequited kind or the new kind or the devastating end of love. But her latest musical effort, the six track EP La Vita Nuova and the accompanying short film has taken her on a journey to discovering a different kind of love.

But first she had to deal with the loss of love after the end of a particularly complicated relationship towards the end of of last year.

“The core of the movie, and the EP itself is so much about an experience of cathartic loss and a complicated love relationship that overwhelms you,” she says.

Directed by regular collaborator Colin Solal Cardo with choreography by Ryan Heffington the film is part music video part cinematic fever dream starting with a wounded Chris alone on a rooftop dancing out her feelings before being led by a dark force to the film, and the EP’s message of renewal. Using motifs that would not be out of place in films like Dracula, or Eyes Wide Shut, the soundtrack of La Vita Nuova still draws heavily on Chris’ musical influences that range from Prince and Janet Jackson to euro indie-pop. It is a visceral and visual feast.

“Every sequence falls upon the other like a weird dream state where you are being overwhelmed by something a bit stronger than yourself,” Chris says.

“The whole movie is a destination to something I can’t control, but that final sequence brings a new life or a carnal sensuality.”

It’s up to the audience to interpret what the new life is, what it means for them, but for Chris the new life is one where she is, at last, finding love for herself.

“It is a good love story that starts at the end of the film (the love story with myself). I feel it starting because I have given myself the opportunity to start it,” she says. “Even that slight gesture of looking at yourself with warmth and forgiveness is part of accepting myself for who I am.”

La Vita Nuova is out now. The accompanying short film is available on Youtube.