The origin and identity of a massive space object that careened past Earth in 2017 have remained a mystery ever since.

The object, called ‘Oumuamua — a Hawaiian name meaning “scout” or “messenger” — traveled on a trajectory that strongly suggested it came from another star system. That made it the first interstellar object ever detected.

But what was it? A few researchers, including Harvard University astronomer Avi Loeb, posited the object was an alien spacecraft. Others suggested it was an asteroid, or perhaps an interstellar comet.

Now, a pair of papers published in an American Geophysical Union journal offers another theory: that ‘Oumuamua was shrapnel from a tiny planet in a different solar system.

“We’ve probably resolved the mystery of what ‘Oumuamua is, and we can reasonably identify it as a chunk of an ‘exo-Pluto,’ a Pluto-like planet in another solar system,” Steven Desch, an astrophysicist at Arizona State University and a co-author of the new study, said in a press release.

A planetary fragment made of frozen nitrogen

Desch and his coauthors think that half a billion years ago, a space object struck ‘Oumuamua’s parent planet. That sent ‘Oumuamua careening towards our solar system.

Once it neared the sun, their thinking goes, ‘Oumuamua sped up as sunlight vaporized its icy body. Comets follow a similar movement pattern, known as the “rocket effect.”

Because ‘Oumuamua’s makeup is unknown, the researchers calculated what kinds of ice would sublimate (change from solid to gas) at a rate that could account for ‘Oumuamua’s rocket effect. They concluded that the object is likely made of nitrogen ice, like the surface of Pluto and Pluto’s moon Triton. 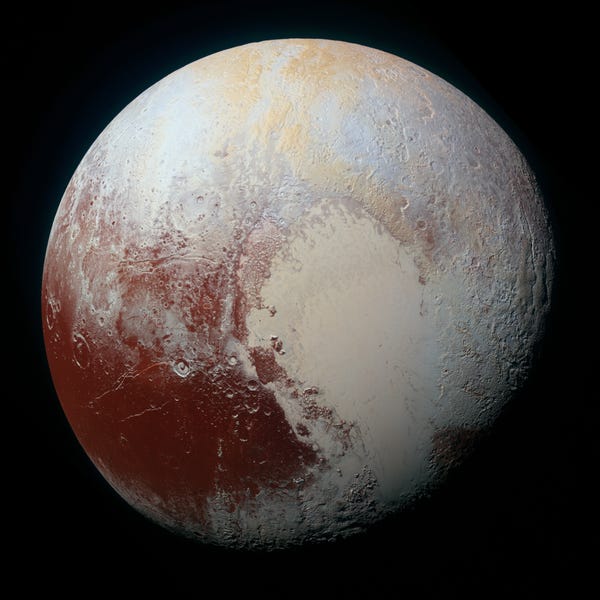 As it got approached our solar system — and therefore the sun — ‘Oumuamua started sloughing off frozen nitrogen layers. The object entered our solar system in 1995, though we didn’t realize it at the time, then subsequently lost 95% of its mass and melted away to a sliver, according to the study authors.

It’s a comet. It’s an asteroid. Nope, it’s neither. 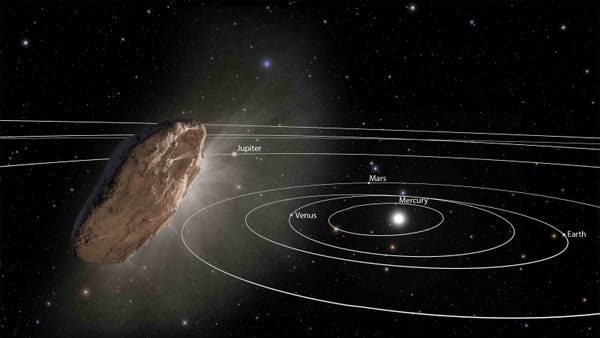 By the time astronomers became aware of ‘Oumuamua’s existence in 2017, it was already zipping away from Earth at 196,000 mph. So they had only a few weeks to study the strange, skyscraper-sized object. Several telescopes on the ground and one in space took limited observations as the object flew away, but astronomers were unable to examine it in full. ‘Oumuamua is now too far away and too dim to observe further with existing technologies.

The limited nature of the information gathered left room for scientists to offer guesses about what the object might be and where it came from. ‘Oumuamua was initially classified as a comet, but it didn’t appear to be made of ice, and it didn’t emit gases as a comet would.

‘Oumuamua’s spin, speed, and trajectory couldn’t be explained by gravity alone, which suggested it was not an asteroid either. And the object’s shape and profile — it’s about one-quarter of a mile long but only 114 feet wide — doesn’t match that of any comet or asteroid observed before.

According to the authors of the new study, however, ‘Oumuamua’s frozen-nitrogen composition could explain that shape.

“As the outer layers of nitrogen ice evaporated, the shape of the body would have become progressively more flattened, just like a bar of soap does as the outer layers get rubbed off through use,” Alan Jackson, another study co-author, said in the release.

Some astronomers still think it was an alien ship

Unlike most space rocks, ‘Oumuamua seemed to be accelerating, rather than slowing down, in telescope observations.

That is in part why Loeb thinks ‘Oumuamua was an alien spacecraft. In a book he published in January, titled “Extraterrestrial: The First Sign of Intelligent Life Beyond Earth,” Loeb describes ‘Oumuamua as a defunct piece of alien technology.

“The object has anomalies that merit some attention — things that do not line up in the ways we expected,” he told Insider in December. “Other people say, ‘Lets shove those anomalies under the rug of conservatism.’ I have a problem with that because when something doesn’t line up, you should say it.” 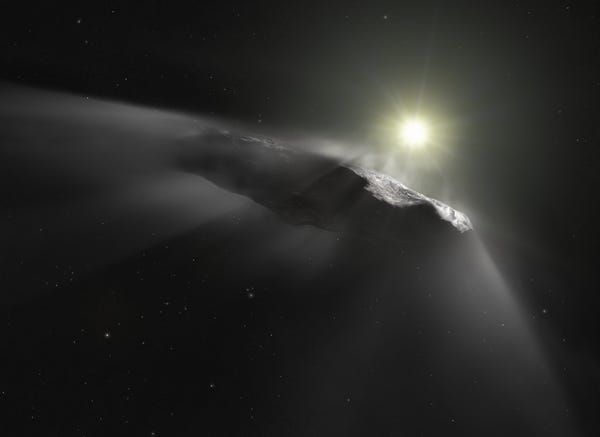 Still, a 2019 study from an international group of astronomers analyzed all the ‘Oumuamua data available and concluded that Loeb’s theory was unlikely.

“We find no compelling evidence to favor an alien explanation for ‘Oumuamua,” the astronomers wrote.

Matthew Knight, a University of Maryland astronomer who co-wrote the study, put it this way: “This thing is weird and admittedly hard to explain, but that doesn’t exclude other natural phenomena that could explain it.”