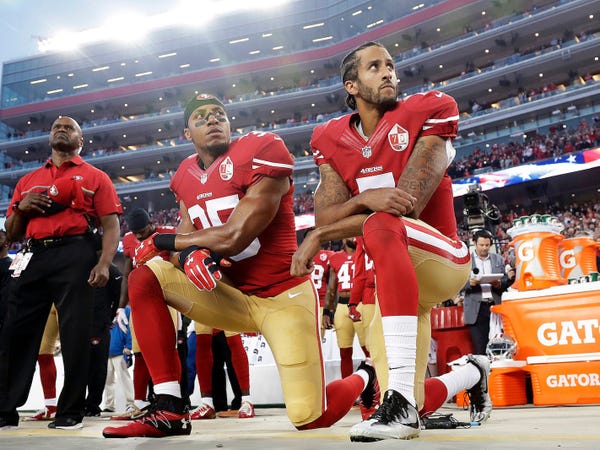 On Wednesday, the Milwaukee Bucks refused to take the court for the playoff game against the Orlando Magic in protest of the police shooting of Jacob Blake.

The boycott was the most powerful statement yet from NBA players. They continue their effort to keep attention on issues of racial justice while continuing their season from inside the bubble in Orlando, Florida.

The Bucks' boycott came four years to the day after Colin Kaepernick's protest was first noticed by the public.

Kaepernick's protest began unnoticed when he sat through the national anthem during the 49ers' first two preseason games. His protest was noticed and became a national story before the team's third preseason game on August 26, 2016.

Two days later, Kaepernick spoke with reporters about his decision to sit out the anthem.

"There's a lot of things that need to change," Kaepernick said at the time. "One specifically is police brutality. There's people being murdered unjustly and not being held accountable. Cops are getting paid leave for killing people. That's not right. That's not right by anyone's standards."

Four years later, Kaepernick's call for justice is as relevant as ever. Kaepernick's protest would evolve as he switched to kneeling instead of sitting to show respect while still protesting.

While Kaepernick would find himself blackballed by the NFL, his decision to kneel sparked a new era in player protest, with more athletes from across sports taking public stances and raising awareness on issues of social justice.

Kaepernick's influence was evident at the start of the NBA's time in the bubble, with teams kneeling through the national anthem just as Kaepernick had.

On Wednesday, four years after Kaepernick's initial call to address police brutality, players on the Bucks and later across the NBA took a new step forward in their protest, calling off their games in favor of making a clear call to action.