‘‘When you enter the secret world and you are engaged in the intensive examination of your enemy, your opponent, you in a sense begin to know him and think about him not just as an opponent but some kind of secret sharer.’’ 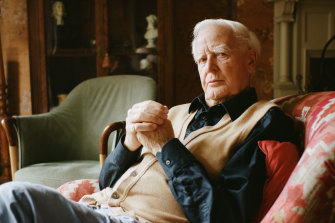 John le Carre wrote 26 novels during his career, the last coming out in 2019.Credit:Charlotte Hadden

That was John le Carre, who has died at the age of 89, talking to The Age in 2001 about his experiences with the British secret service before he embarked on his long and more successful career as a spy novelist and fierce critic of the hypocrisy and moral and political decline of his country – and, indeed, the west. He died of pneumonia on Sunday morning (Australian time) just as the British government was stumbling towards the final deadline for Brexit, a development he loathed.

In that interview he also spoke of his strong commitment to a sense of right and wrong. Indeed, it's arguable that how he thought about running agents in East Germany for MI6 determined the nature of his novels and particularly the three great Cold War novels featuring his best-known protagonist, George Smiley: there was a lot of talk, a lot of thought and a lot of smart people trying to get a handle on what the Soviet Union was up to. And, of course, there was frequently the added hinderance of a traitor – a mole, a term le Carre coined in Tinker Tailor Soldier Spy – in their midst. 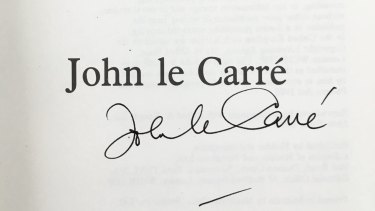 John le Carre adopted his new name after the success of The Spy Who Came in From the Cold.Credit:

The contemporary British spy novelist, Mick Herron, often seen as a successor to le Carre – something he dismisses – regards the Smiley trilogy, which began with Tinker Tailor, as the benchmark for spy fiction.

Like an earlier master of spy fiction, Graham Greene, le Carre was a great storyteller. And it’s significant that so many of his novels have been adapted for large and small screens. Alec Guiness’ portrayal of Smiley for the BBC television series is legendary, as was Richard Burton’s portrayal of Alec Leamas in the stark, black and white film of The Spy Who Came in From the Cold. More recent adaptations include The Night Manager, The Little Drummer Girl and The Constant Gardener.

He published the first of his 25 novels, Call for the Dead, in 1961, but it was the huge success of The Spy Who Came in from the Cold in 1963 that prompted a change of name from David Cornwell to John le Carre and a departure from the intelligence service.

His publisher told him he should choose a name with two Anglo-Saxon monosyllables such as John Smith. That was not for him.

‘‘I thought, no, what they like is three bits to a name. A kind of reassuring Anglo-Saxon first name, then a little bit in the middle – an American would have an initial, ‘von’ wouldn't have been popular – and then the ‘Carre’ was a sort of game I played.’’ It means John the Square. 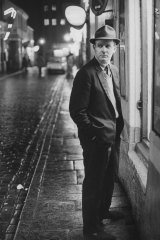 John le Carre in Hamburg in the early 1960s.Credit:

He will go down in literary history as the great novelist of the Cold War. But when the Soviet Union collapsed, that didn’t stop him. In 2001 he published The Constant Gardener, which was a fierce attack on the pharmaceutical industry’s exploitation of Africa in the face of the Aids epidemic.

He came to Australia shortly after publication, reportedly paying his own way because he felt so strongly about the message of the book. At the time he told me he was getting more radical as he got older. Perhaps that was because he regarded the collapse of the Iron Curtain as a missed opportunity for the world.

‘‘Instead of that, there was nothing. There was a pigs-in-clover feeding frenzy. There was an absolutely non-stop exploitation of the Third World, which is getting more and more rapid all in the name of globalisation, whatever the hell that is. What it means to me is that the rich get richer and the poor get more numerous," he said.

Adrian McKinty, the Australian Irish crime writer, rates Tinker Tailior Soldier Spy as the greatest spy novel ever. He points to the psychology of the characters, the slow build of the story and the brilliance of the denouement.

‘‘On good days he was a pessimist in his attitude to Britain; on bad days his attitude was cynicism. There was never a chink of optimism. He saw the country as morally compromised and in terminal decline. If the empire was Britain's poisoned chalice, since the end of empire the poison was leaking into the body.’’

McKinty said Smiley was able to win because le Carre believed the Soviet Union was morally worse than the west. ‘‘But by 2020, I don’t think he thought that.’’

I interviewed him when he came to Melbourne to talk about The Constant Gardener. I confess I was trepidatious; he had a reputation – then, at least – of being a bit terse with journalists. But I couldn’t have been more wrong. I was met by a perfect English gentleman with a shock of white hair and seemingly burnished pink cheeks that made him look if he had just come in from a bracing walk on the cliffs near his home in Cornwall.

He was surprisingly frank about his intelligence days. But he wouldn’t talk about the agents he ran on the other side of the Iron Curtain.

‘‘I am constrained by my own sense of what is right and wrong. Let me try to explain about agents. Very often if someone has decided to be, in effect, a traitor either to his bank or his country or whatever it is, you make him a promise, a solemn promise: that no one will ever know. That his children won’t know, that his grandchildren won't know. There are still promises being kept to the families of people who spied for us during the Nazi era. Therefore there is no limitation on that stuff.’’

Later he spoke at an Age literary lunch and while castigating the pharmaceutical industry's operations in Africa delighted the audience with a perfect imitation of Alec Guiness as George Smiley.

Le Carre's final novel, Agent Running in the Field, was published last year. Whether any more are lurking secretively in his study remains to be seen.