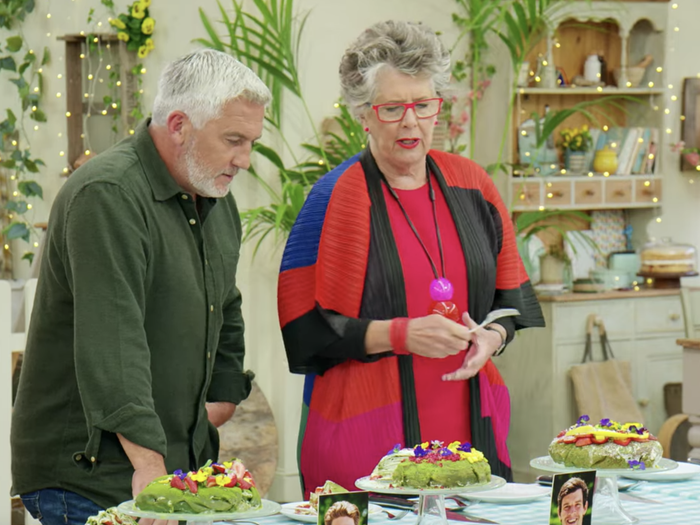 "The Great British Baking Show" released its "Japanese Week" episode stateside on October 30 on Netflix, and viewers on both sides of the Atlantic haven't been impressed with how the series represented Japanese baking.

Specifically, many felt that the episode conflated different types of Asian cuisine, echoing the racist stereotype that all Asian cultures are the same.

Tomoko Kato, the executive pastry chef and owner of New York pastry shop Patisserie Tomoko, told Insider that while she can understand the criticism of the show's episode, she feels "there is room for both traditional and nontraditional" baking in Japanese cuisine.

The 'Japanese Week' episode was a hot topic on Twitter when it aired, with viewers calling out contestants using non-Japanese flavors

On Twitter, viewers called out the lack of any "actual Japanese desserts" featured in the episode's three challenges and how a number of bakers opted to use Indian and Chinese flavors in their bakes.

Some contestants were aware that they'd used non-Japanese flavors in their bakes. Peter Sawkins admitted that his lamb-filled and lamb-shaped steamed buns were "more Chinese-inspired than Japanese-inspired," while Laura Adlington's "piggy pork belly bun" used hoisin and oyster sauces, both of which are more commonly found in Chinese cooking.

"The Japanese element of it is the bun, but this is probably more traditional Chinese-flavored pork," Adlington said to the cameras during the challenge.

While another contestant, Hermine, made her steamed buns with shittake mushrooms (a common type of mushroom in Japanese cuisine), spiced chicken, and fresh chili, she shaped them like pandas — an animal that's native to central China, not Japan, as some on Twitter pointed out.

Some also pointed out a possible issue with the root of the first round signature challenge: that steamed buns are actually Chinese in origin, not Japanese (though there are many variations on steamed buns in other cultures, including Japan).

The mixing in of other, non-Japanese Asian cuisines wasn't the only issue viewers had with the episode.

Several called out one culturally insensitive moment when cohost Matt Lucas made a joke about "cat poo curry" as a play on the katsu curry contestant David Friday said he'd used in his steamed buns.

"Pardon me but what f—— is this," journalist Lindsey Wasson wrote on Twitter. "7 mins in & we've had a 'cat poo curry' (katsu curry joke)," she added.

While the series has increasingly featured cuisine-focused episodes like "Japanese Week" in recent years, each episode ordinarily just focuses on one type of bake, like cake, biscuits, or bread. Bakers have been known to get creative (and nontraditional) with their flavors in those weeks, infusing flavors and ingredients from around the world into traditionally British or French bakes.

Kato breaks in opinion from the consensus on Twitter, though she doesn't think the critiques are entirely wrong.

"I can understand the criticism, but it personally doesn't bother me very much," Kato said.

"There is a style of Japanese cooking that strictly follows tradition," she continued. "But that was not part of any of [the show's] challenges. Japan has so many distinct food styles and specialties. There is room for both traditional and nontraditional."

Regarding viewers' point about steamed buns being included, Kato said that in Japan, the steamed bun, which is called "nikuman" in the country, has become a part of the food culture.

That said, Kato did wonder why "The Great British Baking Show" chose nikuman specifically and pointed out that there are plenty of other breads, like kare pan and anman, that the show might have highlighted instead. "[Kare pan and anman] are more like Japanese to me," Kato said.

Bryan Washington wrote for The New Yorker in April that "kare pan is a little like a savory jelly doughnut, with a pool of curry filling encased in a deep-fried yeasted crust." According to Washington, kare pan can be traced back to a Tokyo bakery in the 1920s.

Anman, another traditional Japanese snack, is a steamed bun filled with anko, or red bean paste, per Tastemade.

For the technical challenge, the bakers were asked to make matcha crêpe cakes, which Kato said was a fitting task for Japan-themed baking.

Crêpes themselves are French in origin, per the Institute of Culinary Education. However, Kato told Insider that French baking has influenced Japanese baking in a big way, and said making crêpe cakes was a "totally appropriate" challenge to include in the episode.

"In Japan, French patisseries are very common," Kato said. "You often see Japanese chefs studying abroad and returning to Japan with those influences. And France isn't the only baking style that you see influencing Japan. One of my favorite cakes in Japan is the German Baumkuchen."

As for the kawaii cakes the bakers were asked to make for the final showstopper challenge, Kato told Insider that this baking trend is popular in Japan.

"There is a clear kawaii aesthetic. You do find it in Japanese baking, but I would say the more classic French pastries are more popular in Japan," she said.

Despite not being bothered much by how the show represented Japanese baking, Kato did have some suggestions for improvement. She said it might be a good idea to include popular Japanese desserts, like the Japanese cheesecake, if the show does another "Japanese Week" episode in the future.

During "Bread Week," judge Prue Leith elicited minor outrage after she said fellow judge Paul Hollywood's version of the babka was better than any she'd had in New York.

"I have had it in New York and it's not nearly as nice as this," Leith said. Her response riled up quite a few viewers who came to New York babka's defense and jokingly called her comments "blasphemy."

Over the years, viewers and food publications have argued that the show has a complicated relationship with cultural bakes.

"Anyone who's watched ['The Great British Baking Show'] also knows how prickly the judges get when they think something has too much spice, how easily they exoticize non-British foods, and how the standard marker of a good baker is their ability to make a Victoria Sponge," Jaya Saxena wrote for Eater in February.

Saxena echoed Sana Noor Haq, who wrote for Gal-Dem in September 2019 that "The Great British Baking Show" has "a problem with spice."

On the flip side, some of the show's diverse former contestants have defended the series against accusations of whitewashing. Ruby Tandoh, who appeared on the show's fourth season, wrote a Medium post for Heated in February, saying that while the show is "steeped as it is in the symbolism of an old-fashioned, implicitly white Britishness," it continues to promote diverse talent.

Nadiya Hussain, the winner of the sixth season, went on to become a successful cookbook author and writes a weekly column for The Times. Rahul Mandal, the winner of the ninth season, also writes for The Times. Benjamina Ebuehi, a quarter-finalist on season seven, is a food stylist and baker, and published a cookbook, "The New Way to Cake," in 2019. Ebuehi also runs her own blog, Carrot & Crumb.

Netflix did not immediately respond to Insider's request for comment.

"The Great British Baking Show" is currently streaming on Netflix. To watch, you'll need to sign up for a Netflix subscription. The basic plan costs $8.99 per month, while the standard plan costs $12.99 per month, and the premium plan costs $15.99 per month. (When you subscribe to a service through our links, we may earn money from our affiliate partners.)