Saying goodbye to summer is never easy, even when you’ve spent most of it masked up and indoors. But this year, the arrival of Labor Day brings a slate of virtual and in-person entertainment offerings that will shake up your socially distant routine, from drive-in movies and comedy shows to a simulcast concert and a very special cast reunion of the cult-classic dance flick Center Stage.

Also on deck: a print sale fundraiser for Black trans lives and an art auction benefiting Planned Parenthood. So, see which items pique your interest and plan your month accordingly.

It’s the 20th anniversary of Center Stage, so the American Ballet Theatre is hosting Up Close and Center Stage, a reunion of the cult-classic dance flick’s cast—Amanda Schull (Jody Sawyer) and Zoë Saldana (Eva Rodriguez), as well as ABT’s Sascha Radetsky (Charlie Sims) and Ethan Stiefel (Cooper Nielson)—airing tonight, at 7:30 p.m. ET, on the company’s YouTube channel. They’ll reflect about their time at the fictional American Ballet Academy and the impact of film on their lives and careers, as well as on the field of ballet. Fix yourself a margarita and tune in 75 minutes before curtain for an intimate Zoom cocktail hour fundraiser with cast members to help support ABT’s dancers, crew, ballet masters, musicians, and faculty during the company’s COVID-19 closure through the ABT Crisis Relief Fund. “Bad Feet and All” tickets start at $150. 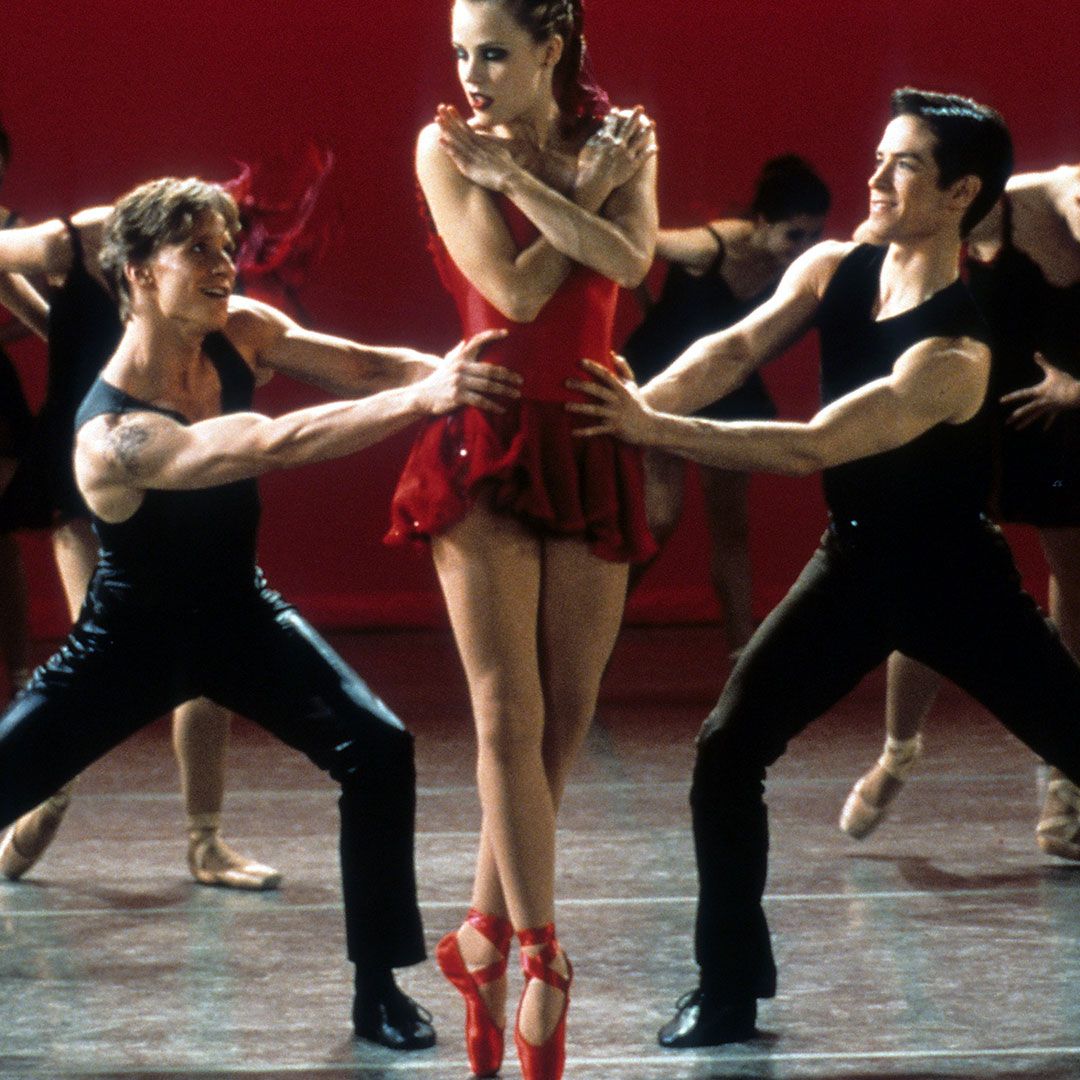 Towards Utopia: Pro-Sex, Anti-Fascist, a print sale fundraiser in solidarity with Black trans people and sex workers, features edition artworks from 26 art world superstars, including Nan Goldin and Ryan McGinley, as well as next-gen talent like Richie Shazam and Luke Gilford. It aims to counter the epidemic of violence against the Black transgender community and provide material support to sex workers who have been left out of COVID-19-related financial assistance programs. The works are priced between $50 and $200, with all proceeds going to support G.L.I.T.S. and For the Gworls, two Black trans-led organizations that provide housing and financial aid for gender-affirming surgery, as well as SWOP Brooklyn, which operates a mutual aid fund for sex workers. 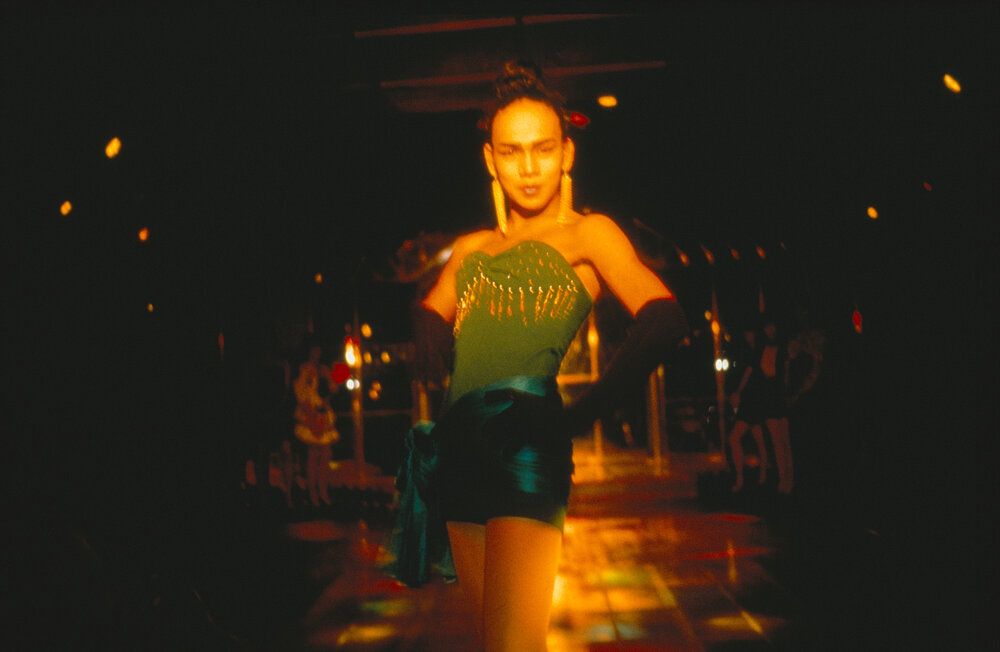 As part of Nightly Met Opera Streams, an ongoing series of free prerecorded performances during the Met Opera’s coronavirus closure, the company is making last season’s sold-out production of George Gershwin’s Porgy & Bess—starring bass-baritone Eric Owens and soprano Angel Blue as the title characters—available over Labor Day weekend. From Friday, September 4, at 7:30 p.m. ET, to Sunday, September 6, at 6:30 p.m. ET, you’ll be able to screen the English-language masterpiece set in 1920s South Carolina on the Met Opera’s website, capping off a week of 20th-century classics. 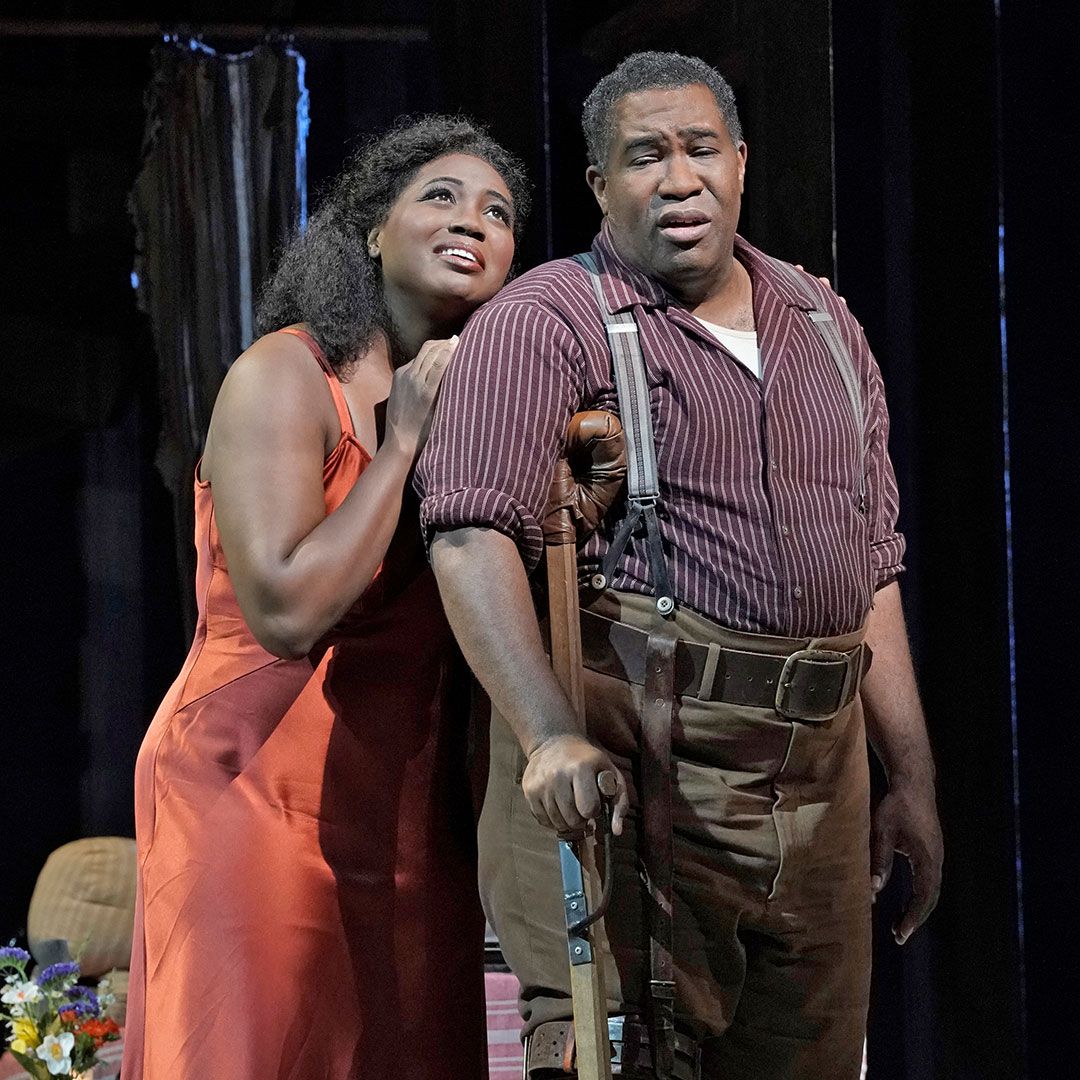 It’s a Queens comeback. MoMA PS1, the contemporary branch of the Museum of Modern Art located in Long Island City, Queens—the NYC borough hardest hit by the COVID-19 pandemic—is reopening on September 17 with timed-entry ticketing. And to celebrate, over Labor Day weekend, it’s hosting a socially distanced pre-party, called Warm Up 2020. A reboot of the museum’s popular summer concert series offering eight hours of DJ sets and live performances by local artists, it will be broadcast globally from MoMA PS1’s iconic courtyard. For those in the city, the concert will be simulcast at nine outdoor cultural spaces across Queens and Brooklyn: The Rockaway Hotel, Queens Botanical Garden, Outerspace, Cafe Erzulie, Elsewhere, Ode to Babel, Public Records, and Rise Radio. Attendees are encouraged to donate to NYC Nightlife United, an emergency relief fund to help support music spaces and artists who have been devastated by the coronavirus. 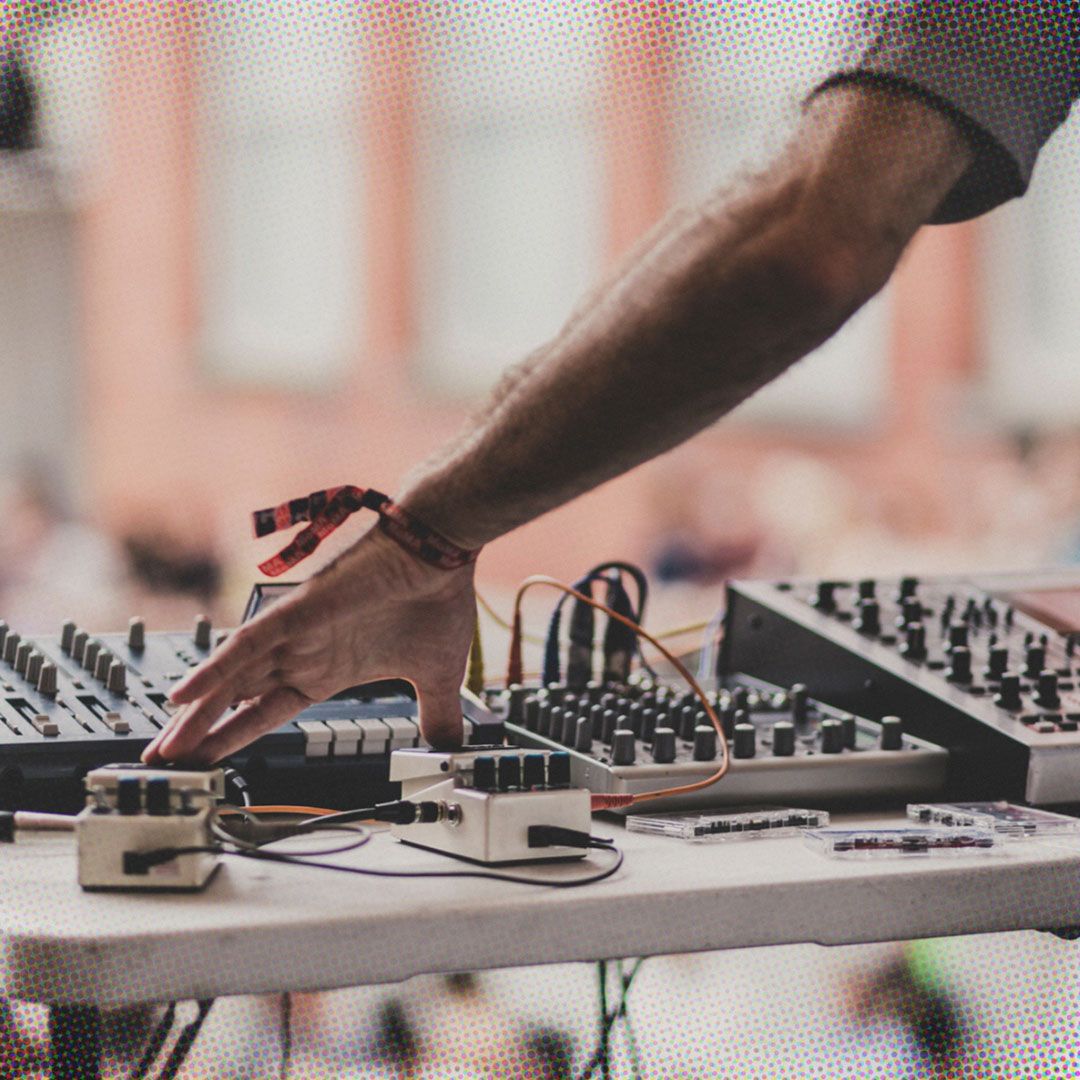 Jack Shainman’s “States of Being” is a new series of interventions, happenings, and community outreach initiatives aimed at engaging the public in the New York gallery’s social justice work. The gallery’s 20th Street window now read “8m46s,” in reference to George Floyd’s murder by Minneapolis police officers, an installation that will remain in place until Election Day as a solemn daily reminder. A Nick Cave show opens there on September 8, featuring bronze Soundsuit sculptures. As Confederate monuments have been toppled by Black Lives Matter protesters this summer, empty plinths are left as hopeful spaces, and Cave sees these supersized human-based forms incorporating vintage floral toile and ceramic bird figurines as a symbol of reckoning and rebirth. 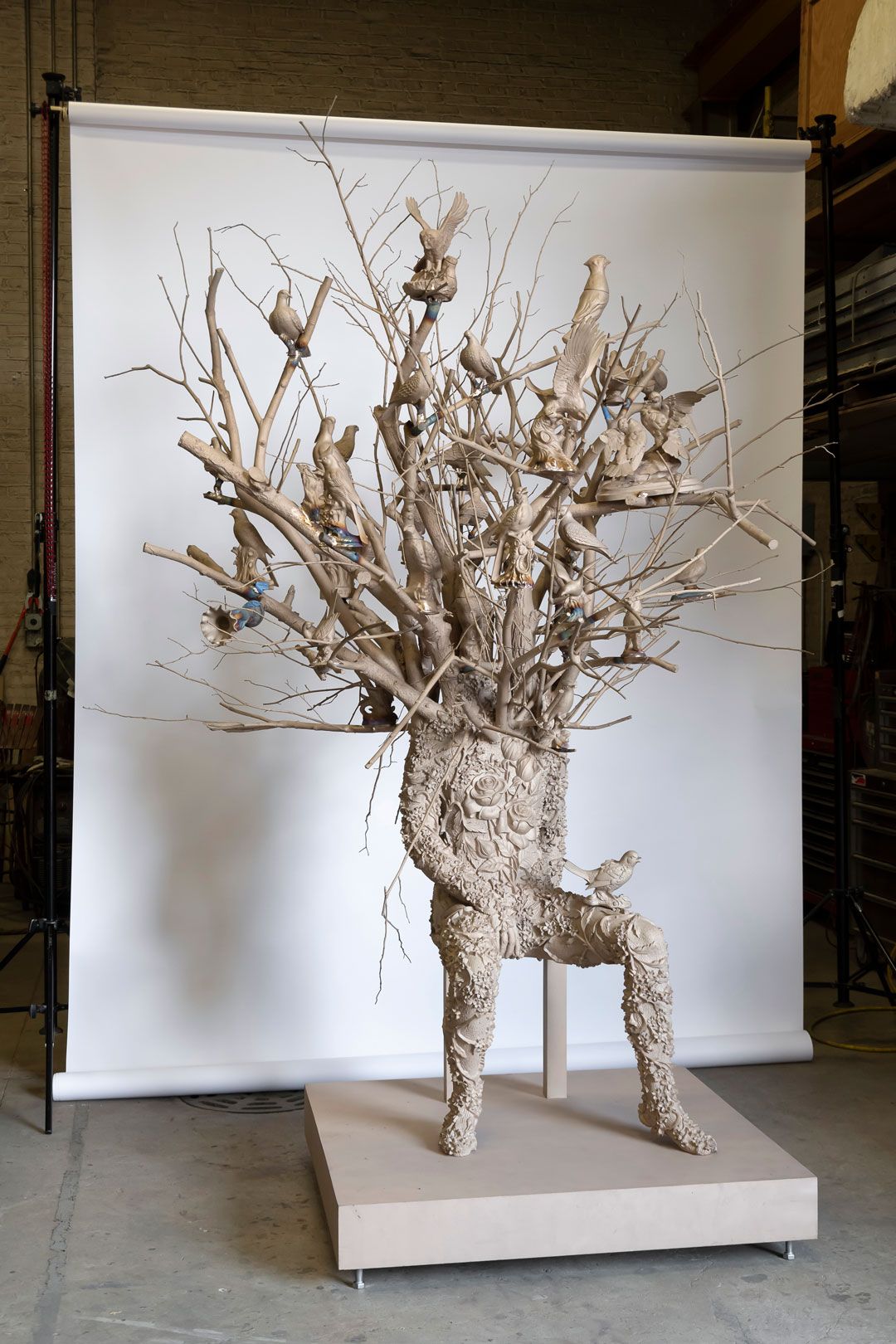 Using a combination of photo transfer, oil painting, and finger painting, Amoako Boafo’s striking portraits celebrate the beauty of Blackness in all its diversity and complexity. The Accra, Ghana– and Vienna, Austria–based artist, who was the breakout star of last year’s Art Basel Miami Beach, recently lent his hand to Kim Jones’s painterly Dior Men Spring 2021 collection. “I Stand By Me,” his solo show at Mariane Ibrahim Gallery in Chicago, opens September 10. It features large-scale canvases depicting strong, luminous figures against monochrome backdrops, inspired by emerging Black creatives from the African Diaspora, their forms rendered in almost-sculptural whirls of blue and brown paints. 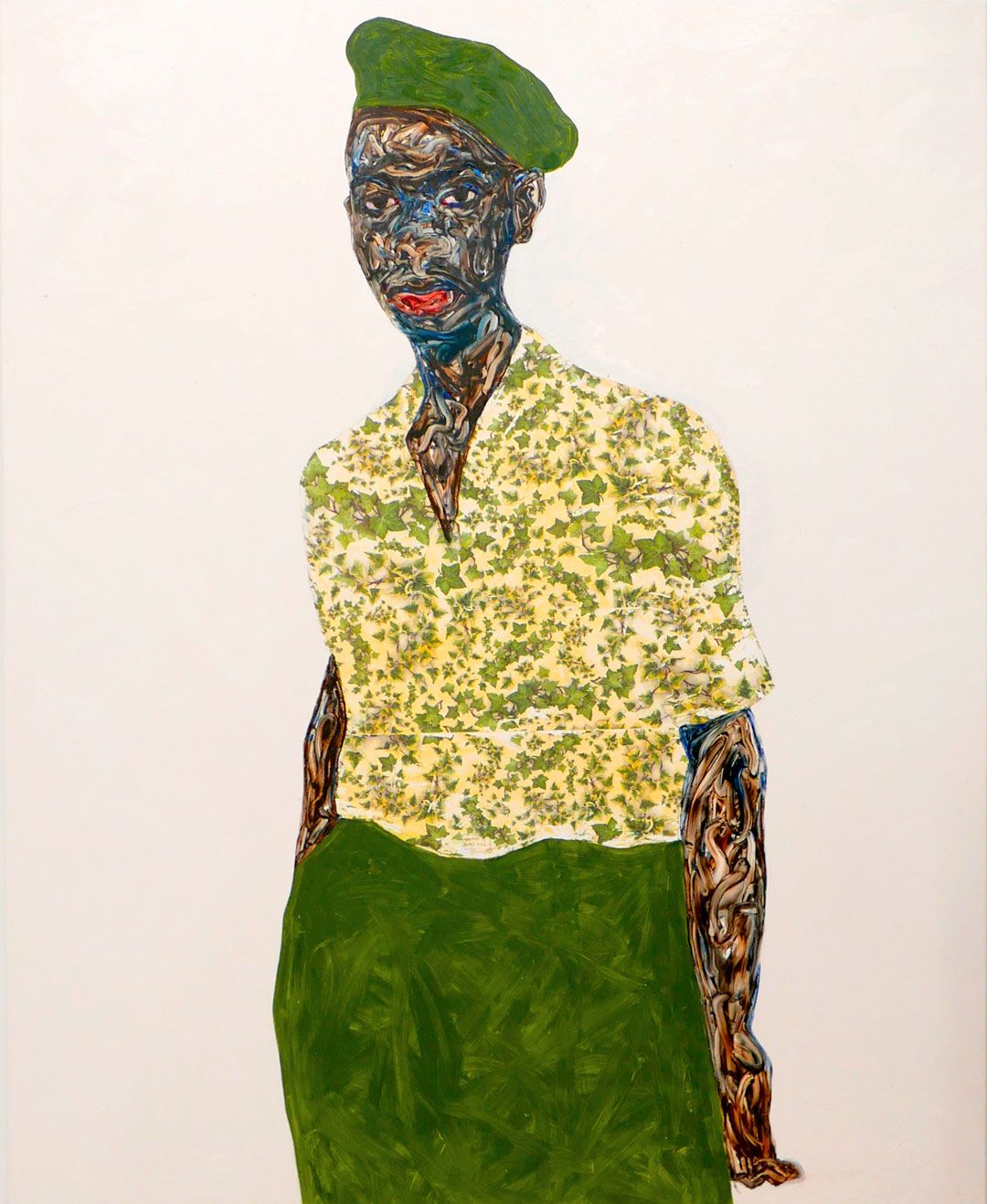 Presented by Film at Lincoln Center, the 58th edition of the New York Film Festival will arrive in a combination of virtual and drive-in screenings, thanks to partnerships with the Queens Drive-In at Flushing Meadows Corona Park and the Brooklyn Drive-In at The Brooklyn Army Terminal. Along with panels, sneak previews, and gala events, the festival will offer a main slate of 25 films. Don’t miss the Centerpiece selection, Chloé Zhao’s Nomadland. A modern Western starring Frances McDormand in her first role after winning the Oscar for Best Actress at the 2018 ceremony, it was selected to screen at all four major fall festivals: Venice, Telluride, Toronto, and New York. Tickets go on sale to the public on September 11, and the complete lineup can be found online. 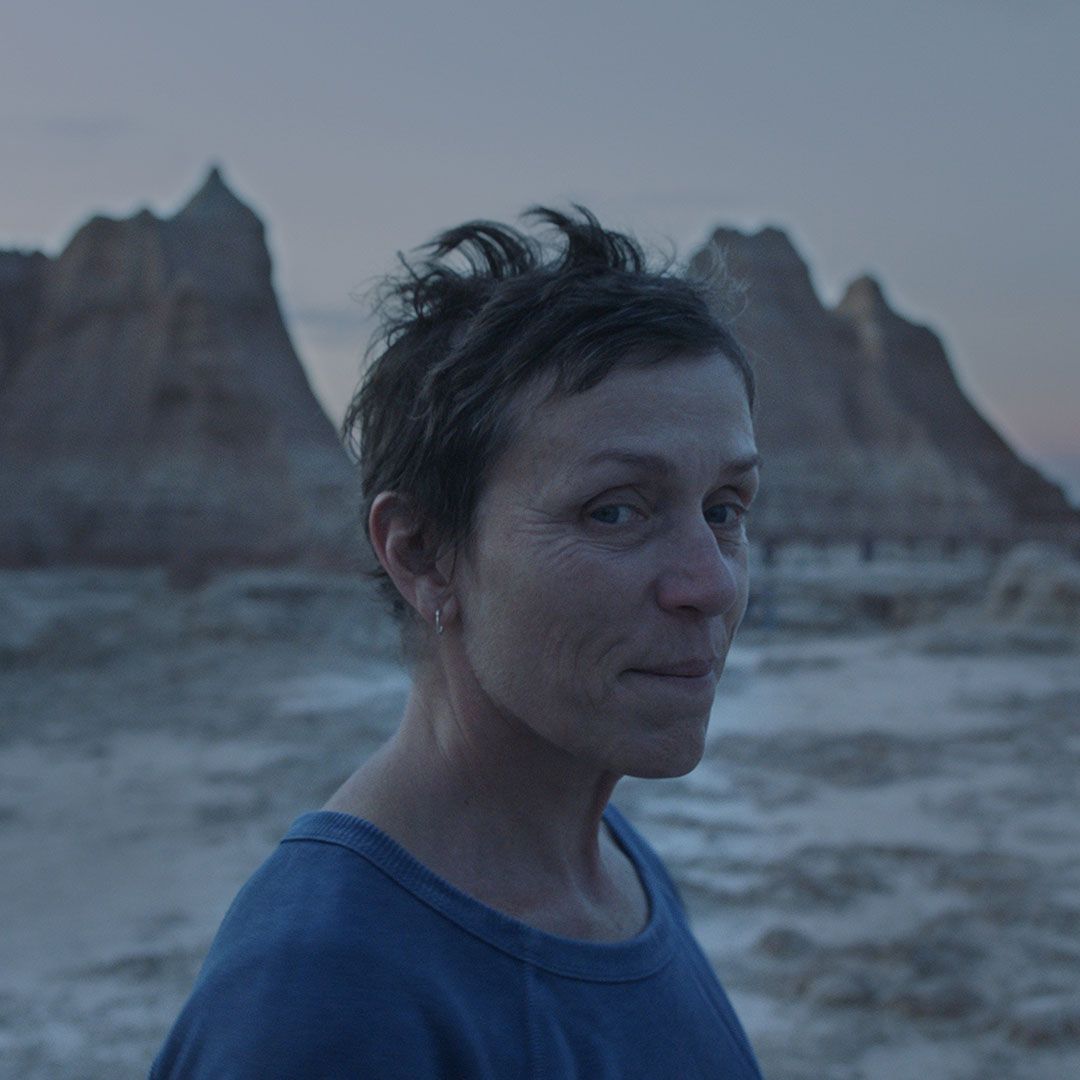 The Emmy Awards will understandably look a little different this year, but they promise to be no less entertaining, thanks in part to the fact that Jimmy Kimmel is hosting. He’ll be anchoring the show live from the Staples Center in Los Angeles, but there will be no red carpet beforehand and no audience present. Instead, the show’s producers aim to have a professional camera and camera operator stationed where every nominee is currently located. This means there will be as many as 140 live feeds ready to roll to catch the reactions of the winners. Insecure, Schitt’s Creek, and The Marvelous Mrs. Maisel are among the nominees for Outstanding Comedy Series, while Don Cheadle, Ramy Youssef, Tracee Ellis Ross, and Kate McKinnon also received nods. Tune in to ABC at 8 p.m. ET to see how many of your favorite stars opt to wear pajamas. 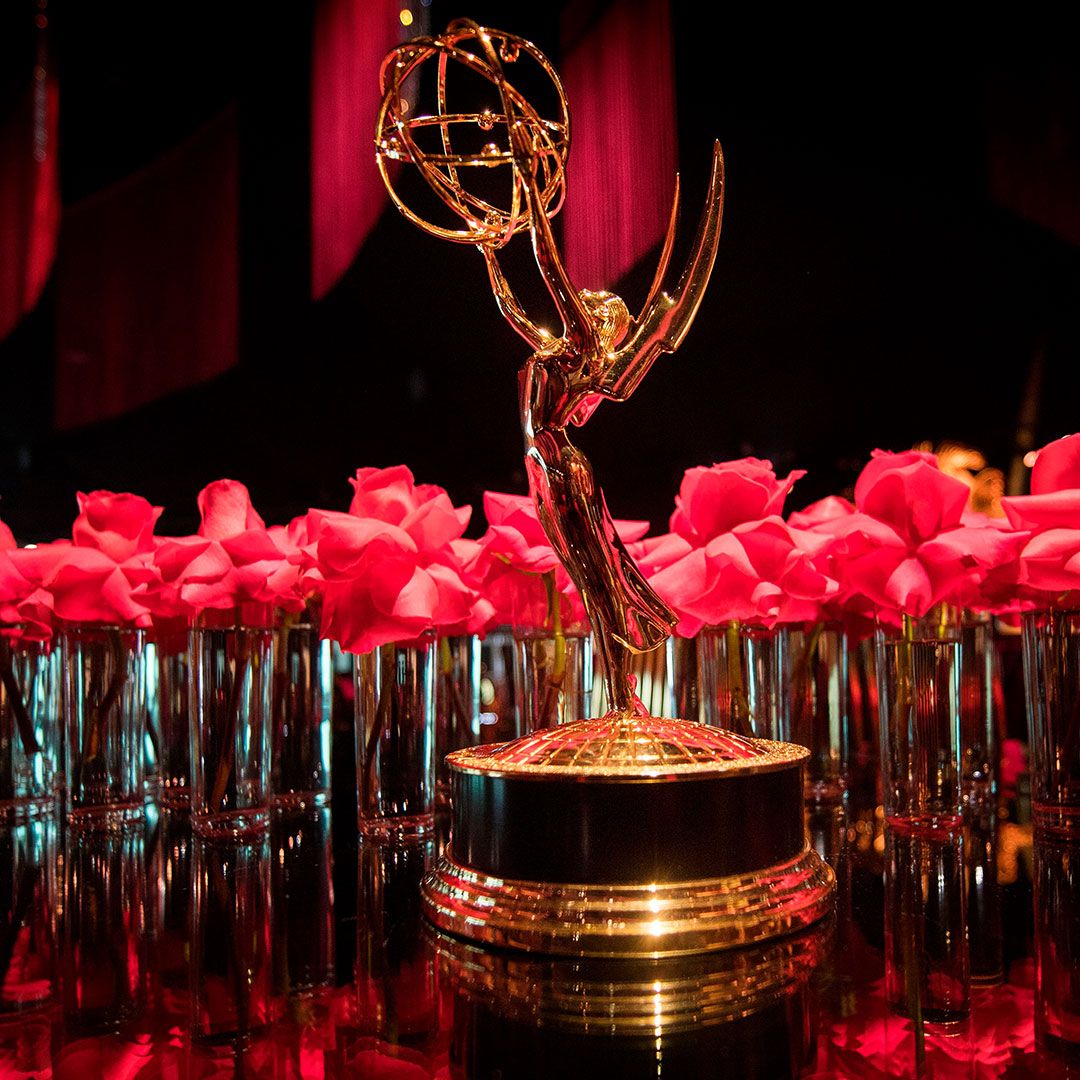 At a time when several states are trying to use the coronavirus pandemic as an excuse to restrict abortion access, Sotheby’s Choice Works 2020 aims to raise critically needed funds for Planned Parenthood. The online benefit auction, with works also on view by appointment in Sotheby’s New York galleries, is organized by artist Cindy Sherman, and Amy Cappellazzo and Lisa Dennison, who are the co-chairs of Sotheby’s Fine Art Division. It features works by leading contemporary artists including a new Elizabeth Peyton painting of Representative Alexandria Ocasio-Cortez on the day she denounced the abuse faced by women in Congress and across the nation, and a major piece from Judy Chicago’s historic Birth Project. 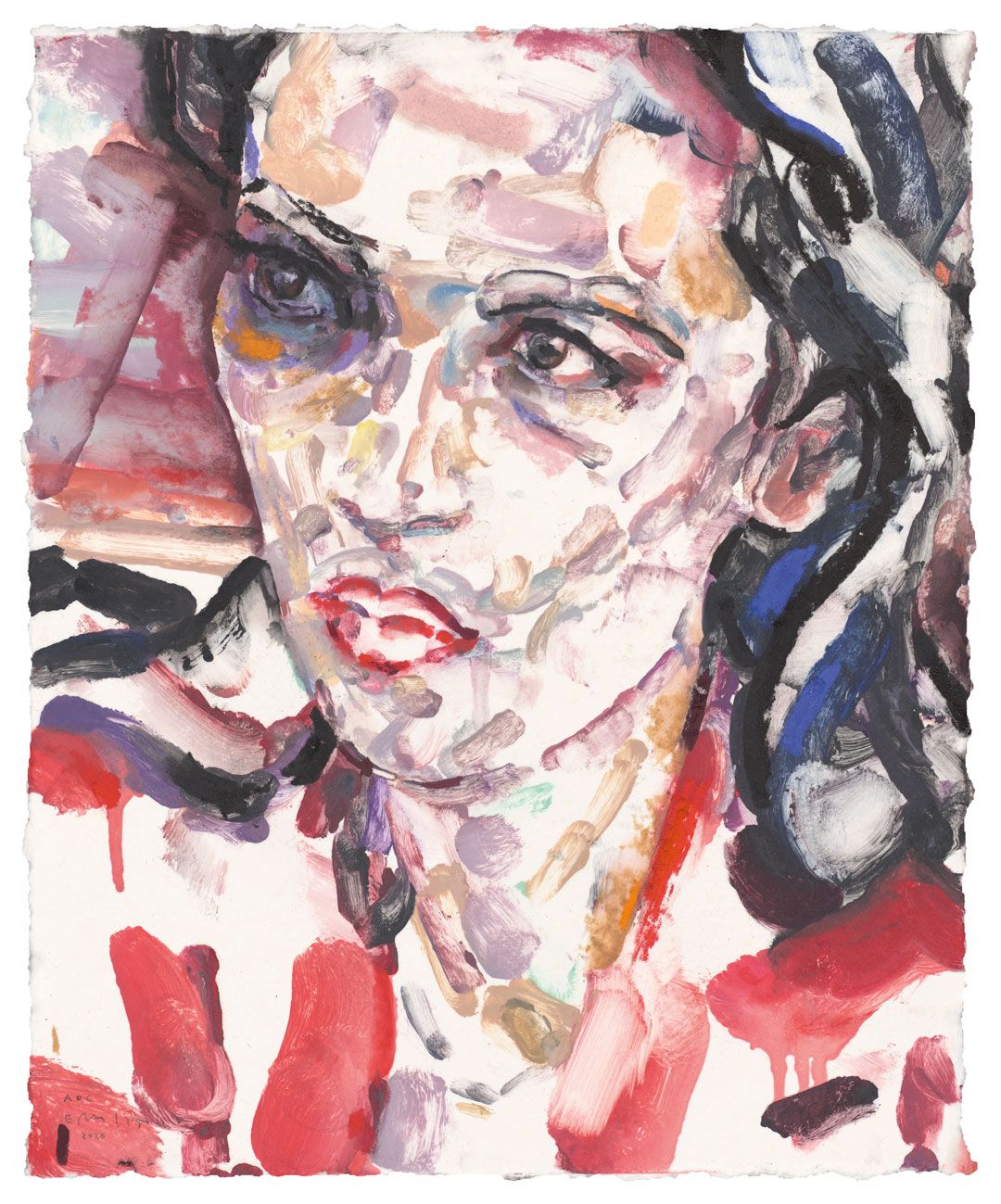 Widely known for his role as Lincoln Rice, Ilana Glazer’s dentist boyfriend on Broad City, comedian Hannibal Buress is launching an innovative “drive-in tour” in support of his new comedy special, Miami Nights, which he dropped on YouTube earlier this summer. It pokes fun at topics ranging from 2 Chainz musing on Bentley trucks to Buress’s own unlawful arrest in Miami in 2017. The tour kicks off in Cleveland on the 22nd and ends in Buress’s hometown of Chicago on the 27th, hitting Butler, Pennsylvania; Indianapolis, Indiana; and Columbus, Ohio along the way. Each performance will take place at a repurposed drive-in movie theater, and all attendees will be required to wear masks. 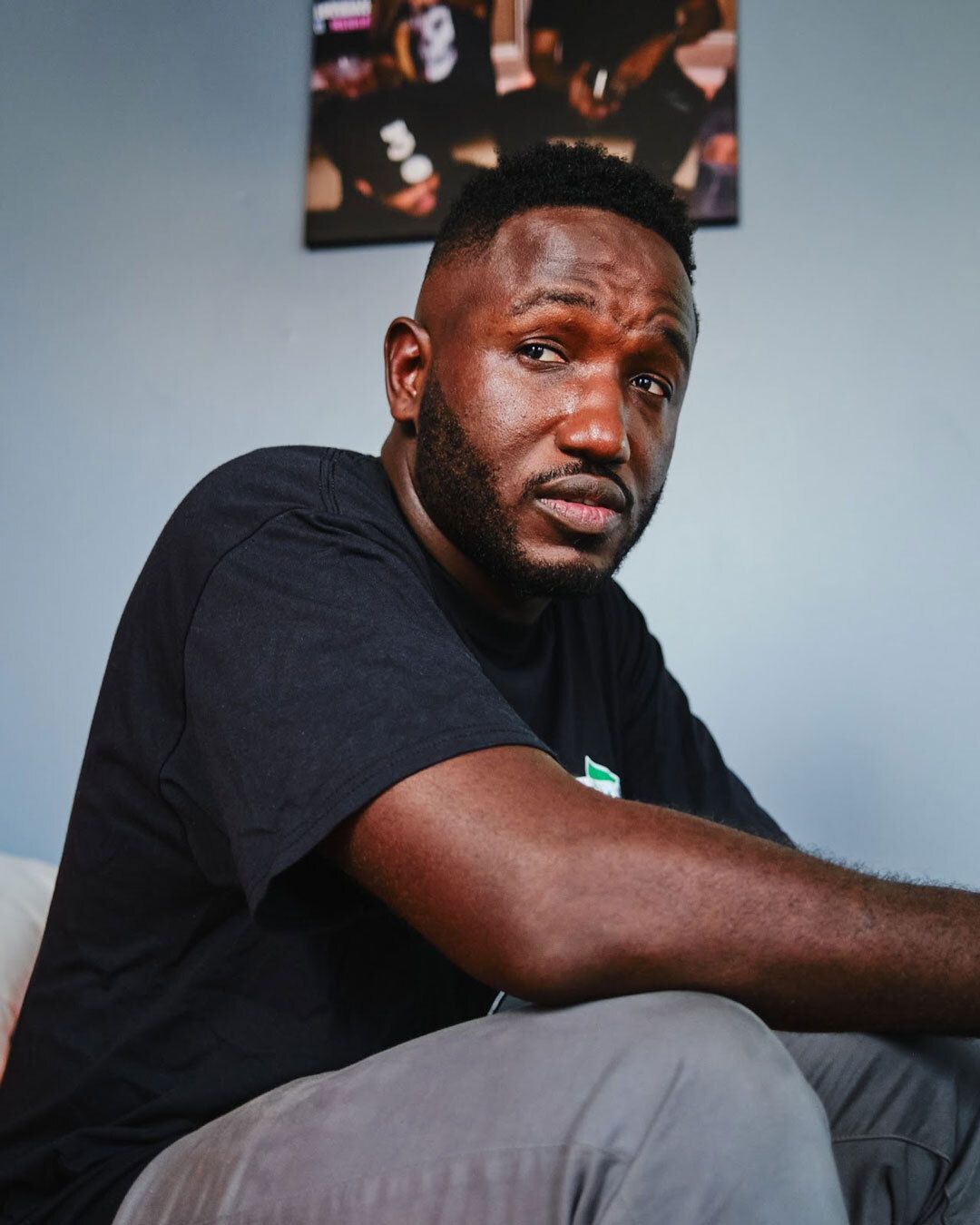