When Taylor Zakhar Perez booked a role in the sequel to the Netflix smash hit “The Kissing Booth,” he knew it would be his breakout — and with that, he began to imagine what the rollout for the project would be, and how his life would change. Of course, the second film came out last summer during the pandemic, and the third and final installment follows suit, releasing today. It’s not exactly been the press tour he expected.

“I had expectations of a traditional rollout for a project like this because ‘Kissing Booth 2’ was 100 percent my breakout role, and you had seen these breakout…I’d say ‘star’ loosely, but you know what I mean. Breakout stars…when it happens, you’re, like, ‘whoa.’ And so when you get a breakout in quarantine, it’s, like ‘All right, everything is just remote from the house, and you don’t really get to interact with people,’” Perez says. “Everyone was, like, ‘Taylor, this is going to be great. This is going to be great for you,’ and then when it came, it was great. But then it just wasn’t the same, I think, as other people experienced, so it’s been very nontraditional.”

He’s managed to get a good dose of star spotting even still — the teenage “Kissing Booth” fans will not be diverted. Living on the west side of Los Angeles, he heads to the water to surf and paddleboard a decent amount, and will see a pack of teen girls whispering about him and pointing to their phones when they pass by.

Luckily his costar Joey King has been there to guide him through all the sudden fandom.

“When we were shooting down there, people came up to her all the time, and she was nothing but lovely. I was, like, ‘I have to do that, too,’” he says. “I’ve looked at other actors and how they interact, and it turns me off.” 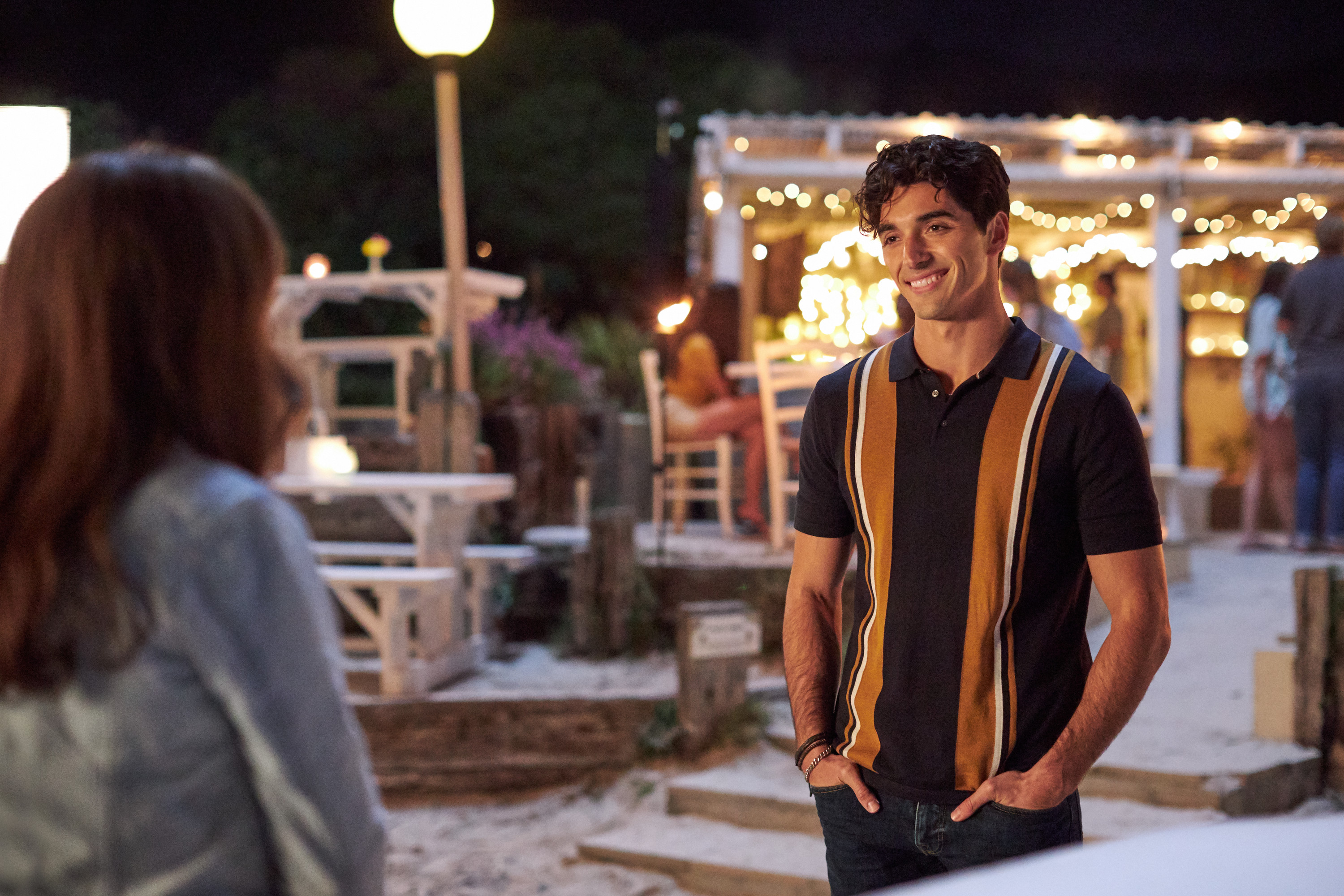 When he first joined the franchise, he had just come back from hiking Mount Kilimanjaro and was terrified to read that the audition was requisition “’American Idol’ and ‘X Factor’ stars.”

“So that was very intimidating,” Perez says. “My answer was, ‘If you support me for this project, I’ll give you 110 percent of what I got.’”

“The Kissing Booth” franchise, while not a critical darling, has been one of Netflix’s most popular. Perez credits the series’ success with the relatability King’s character, Elle, has for high schoolers.

“I wasn’t really a dater in high school, so I didn’t really have that side of Elle’s conundrum she’s going through, but definitely just the ‘Who am I?’ and ‘What do I want to be?’ I feel like everyone has that. I know people peak in high school, people that love high school, and they’re in it to win it, and they talk about it for the rest of their life, high school being the best time of their life. Not me,” he says. “I wanted to move to a city. I wanted to get out of my town and be like the people on TV.” 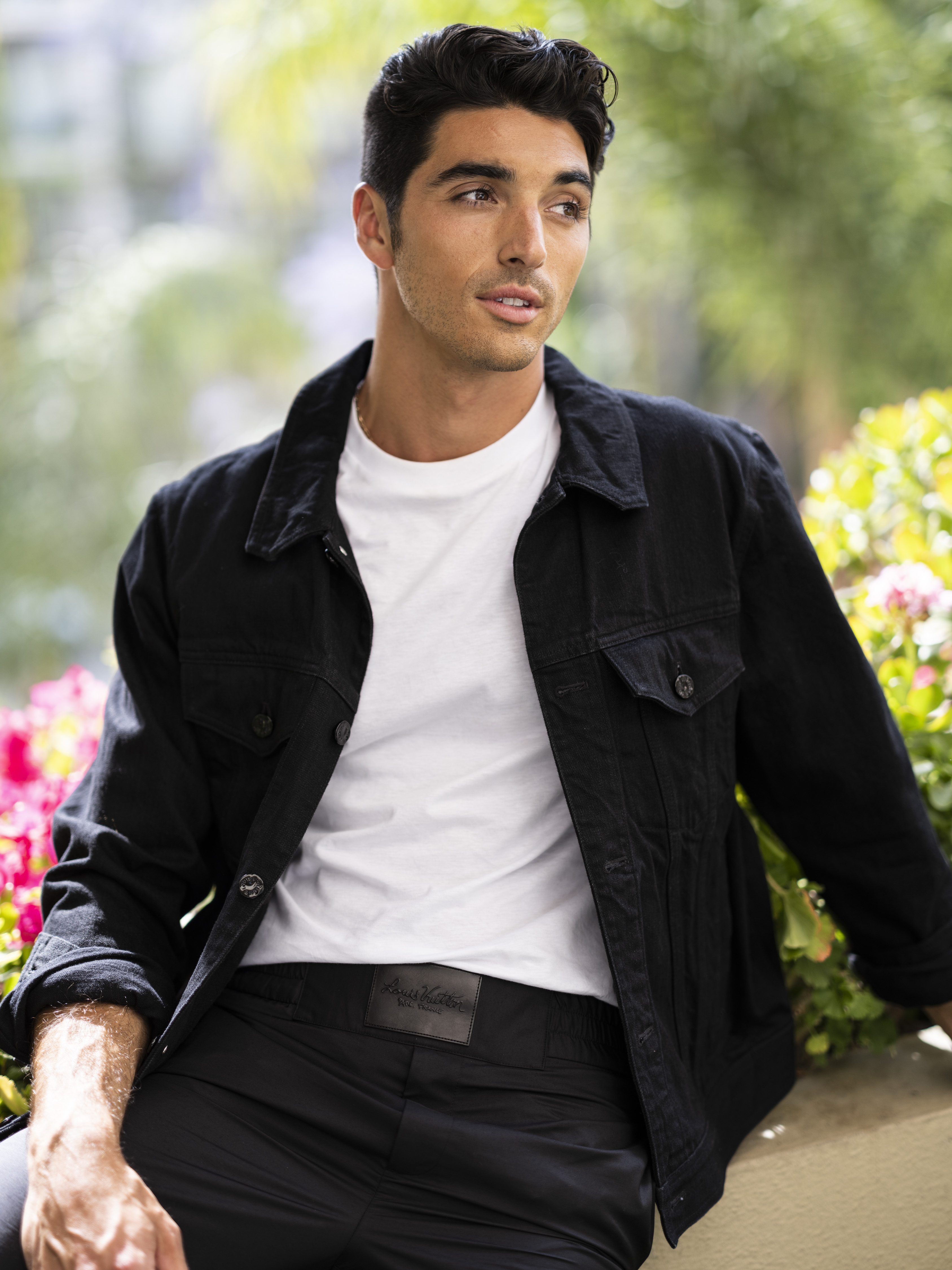 Perez grew up 45 minutes outside of Chicago into Indiana, but was often hitching rides into the city with his parents, who had body shops across Chicago, for auditions. He swam competitively as a kid before becoming interested in acting, and while sports was a mutual love between him and his parents, acting was a whole new world to them. He took matters into his own hands, photographing headshots in his room with a sheet as a backdrop and sending them out in manila envelopes along with self tapes.

“I didn’t have an acting mentor to be, like, ‘You should do this.’ A lot of [the Chicago actors] were community theater folks who probably didn’t even come out and try it in New York or try it in Los Angeles. So yeah, it was a solo effort.”

While completing degrees in history and Spanish at UCLA, he started auditioning furiously, and eventually found his way into the “Kissing Booth” franchise.

“I think back on if I had just focused on one thing, would I be that farther along? Would I have popped sooner or would I have had more opportunities? But I also think that I had a lot of growing up to do,” Perez says. “If I would have hit at 20, I probably would be a mess by 30. So I’m really grateful for the time that I had to grow as a human and be away from my family. I have seven siblings, and I love them all dearly, but you need that time to be away and understand who you are and what you want, and not what your parents want, and then you come full circle of, ‘Oh, they just wanted the best for me.’ And you stop resenting. Then you do all the work.”

Following the “Kissing Booth” frenzy, he’ll be seen in Paul Feig’s new series for HBO, “Minx,” alongside Jake Johnson, a project for Buzzfeed and then remains open for opportunities. He’s loved his time as a teen poster boy but is eager to see what lies on the other side of that.

“I’m 29, and I was able to do ‘Kissing Booth 2’ and 3 and I’m so grateful for it and for that young adult fandom and the support and the excitement about it. And so I’m really looking forward to making a little bit of a jump to the next age bracket and doing…more adult, real-world stuff,” he says.

Specifically, action comedy or anything that involves combining skills and interests. Perez is eager to do it all.

“I love having a project where, yes, you have the acting, but then you also have to supplement it with singing, dancing and choreographed stuff. I would love to do some kind of fighting film. High energy, high stakes type of project.”

MORE FROM THE EYE: