A century of society brides! Tatler celebrates the well-heeled wedding belles who graced the magazine in covers dating back to 1916 – including Princess Marina of Greece and Nancy Mitford

From royalty to the daughters of dukes, a Tatler cover story has long been a coveted trophy for society brides tying the knot.

The British magazine has celebrated more than 100 years of blue-blooded brides-to-be in a stunning new gallery of covers dating back to 1916.

Among the wedding belles featured are Nancy Mitford, whose book the Pursuit of Love was recently adapted into a BBC drama, and Princess Marina of Greece, who married the Duke of Kent, son of George V and Queen Mary.

Both Princess Marina and her sister-in-law, Lady Alice Montagu-Douglas-Scott, finished their outfits with the most dazzling bridal accessory of all – a glittering diamond tiara that has been borrowed from the family vault.

Here, FEMAIL tells the stories of some of the society beauties who have graced Tatler over the years… 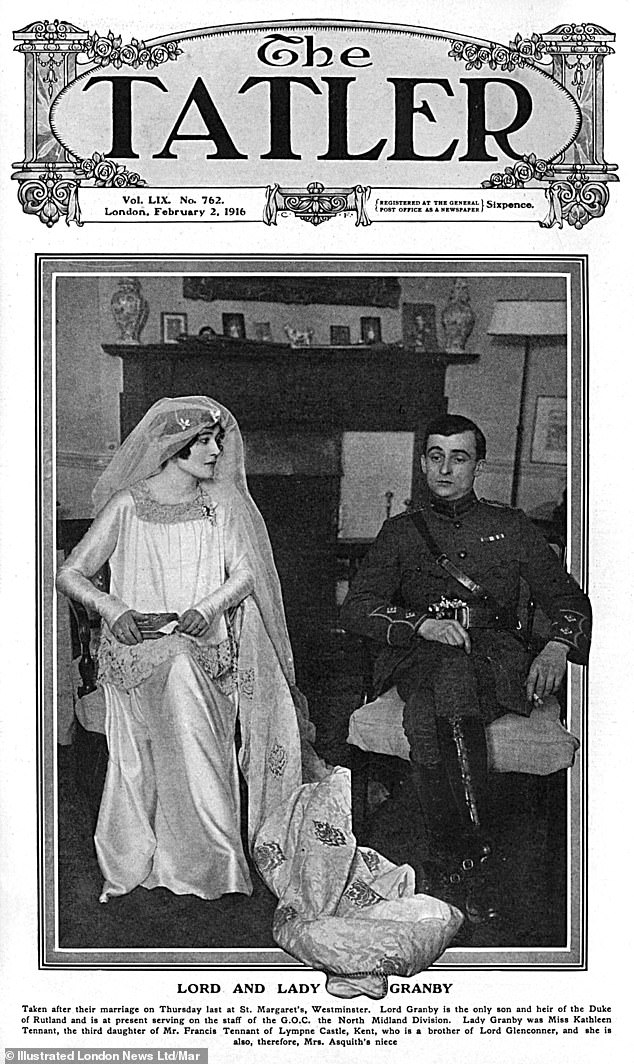 A century before the current Duke and Duchess of Rutland moved into The Crown’s Belvoir Castle with their dynamic brood of children – including Tatler regulars the Manners sisters – the Leicestershire country pile was home to John Henry Montagu Manners, the 11th Duke of Rutland, and his wife Kathleen (née Tennant).

The dashing young couple were photographed in their wedding finery in 1916, following their wedding at St Margaret’s, in Westminster.

The groom, then styled the Marquess of Granby, was the only son of the 8th Duke of Rutland and his wife, Violet, who gives her name to one of the youngest generation of Manners siblings.

The bride, who became Lady Granby on marriage and later the Duchess of Rutland, was the daughter of Francis Tennant, of the prominent Scottish family.

His brother was Lord Glenconner and his sister was Margot Asquith, wife of Prime Minister H. H. Asquith.

The couple went on to become close friends with Edward VIII and Wallis Simpson. 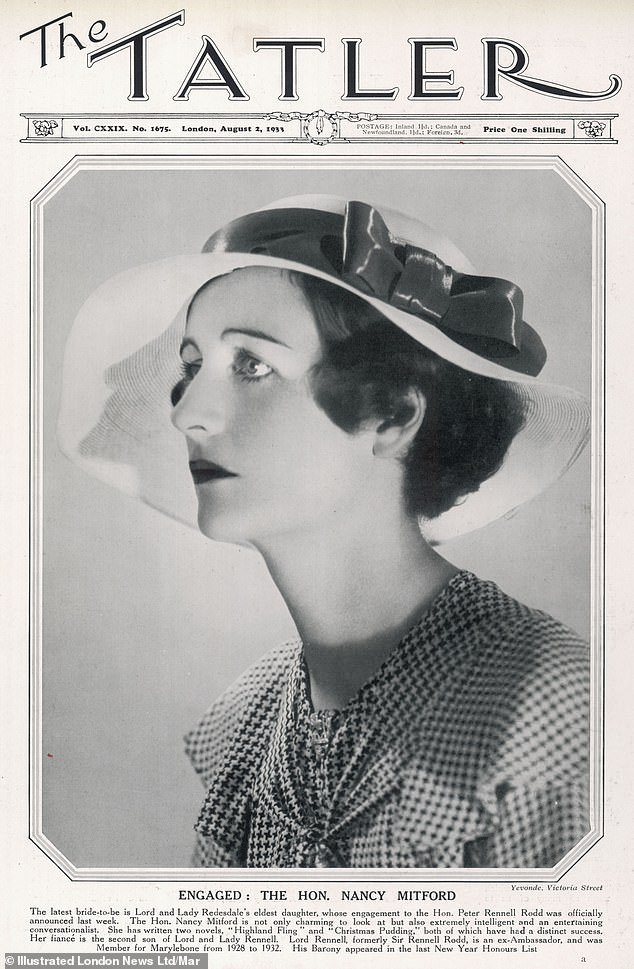 ‘Extremely intelligent and an entertaining conversationalist’: Tatler delivered its verdict on bride-to-be Nancy Mitford on news of her engagement to Peter Rodd in 1933

Author Nancy Mitford, eldest daughter of Lord and Lady Redesdale, was photographed in 1933 on her engagement to Peter Rodd, son of politician and diplomat Sir Rennell Rodd.

The engagement was the second for Nancy, who had already spent five years promised to a man who was gay.

By the time Peter proposed, Nancy was already setting out in her career as a writer.

Her first novel, Highland Fling, was published in 1931, but this and the next three that followed did not sell well.

Her luck changed with the huge success of The Pursuit Of Love in 1945 which gave her the means to move to Paris, where she beautifully furnished a small apartment.

This coincided with her separation from Peter when he returned from the Second World War. The couple formally divorced in 1957. Peter died in 1968. 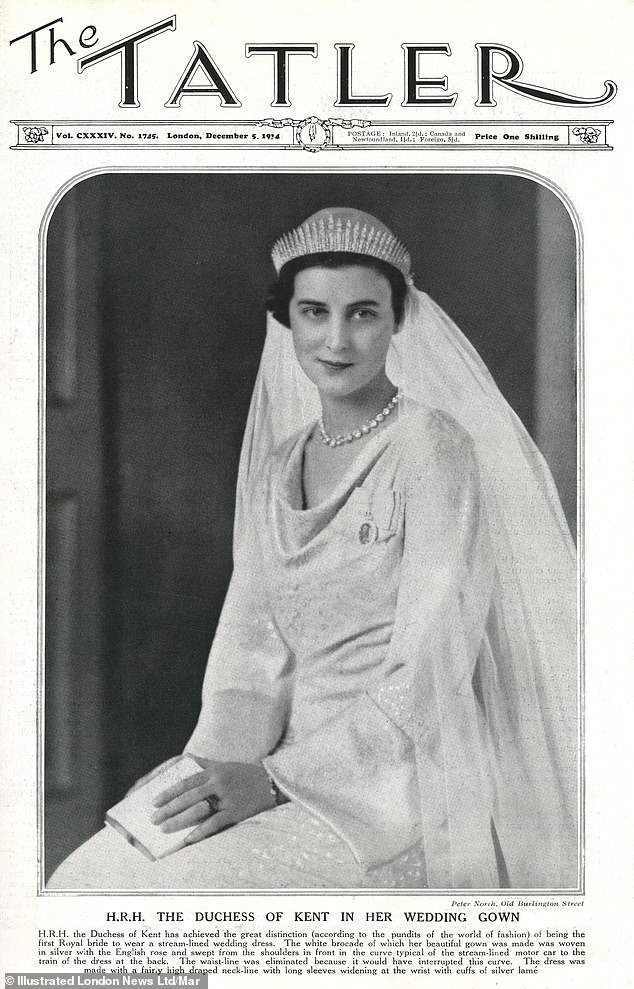 Royal ties: Princess Marina of Greece became the Duchess of Kent on her marriage to Prince George, Duke of Kent, in 1934. She was the Queen’s aunt and Prince Michael of Kent’s mother

Princess Marina of Greece became the Duchess of Kent on her marriage to Prince George, Duke of Kent, in 1934.

Prince George was the fourth son of George V and Queen Mary, and younger brother of Edward VIII and King George VI. This made Princess Marina the current Queen’s aunt.

The Duchess of Kent made headlines by becoming the first royal bride to wear a ‘streamlined’ wedding dress. The gown, designed by Captain Edward Molyneux, swept from the shoulders in a curve to the train at the back of the dress.

The waistline was eliminated because it would have interrupted the curve, with the high draped neckline and long, widening sleeves with cuffs of silver lame adding to the effect.

She finished the look with a tiara now called the Kent City of London Fringe tiara, which was presented to the Duchess by the City of London to mark her wedding.

The tiara, designed in a Russian fringe style, remains in the family and was worn by her daughter-in-law, Princess Michael of Kent, and her granddaughter, Lady Gabriella Windsor, on their wedding days. 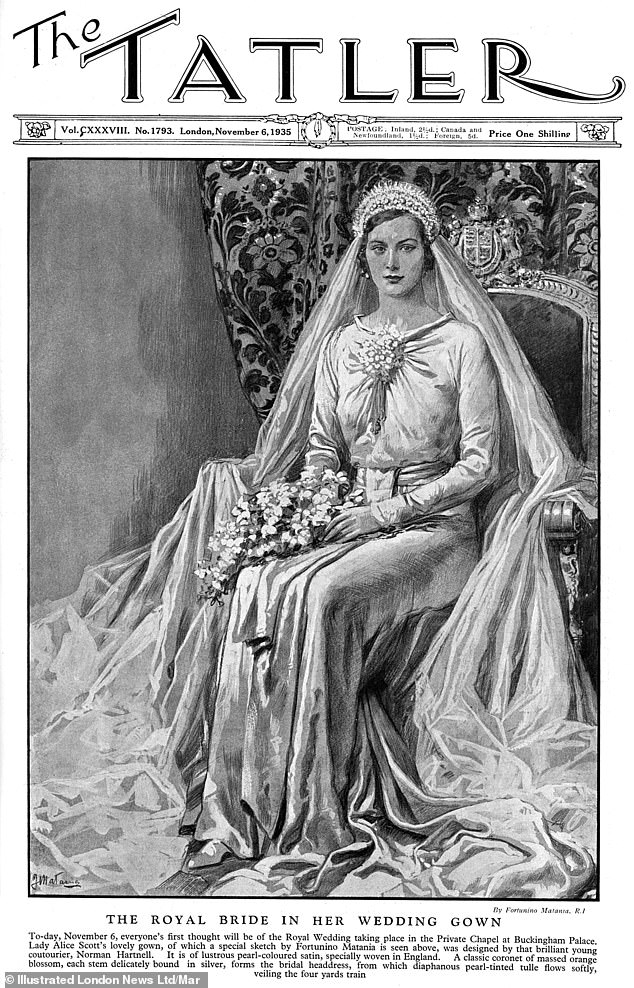 The daughter of the 7th Duke of Buccleuch, Scotland’s largest landowner, Lady Alice was exceedingly well travelled and spent time in France, India and Kenya before returning to the UK to marry Prince Henry.

The couple had originally planned a lavish Westminster Abbey service but scaled back their plans as a mark of respect for the Duke of Buccleauch, who had recently died, and George V’s own ailing health.

Her husband’s nieces, the young Princesses Elizabeth and Margaret, served as bridesmaids.

The couple had two sons, Prince William and Prince Richard, and remained married until the Duke of Gloucester’s death in 1974. 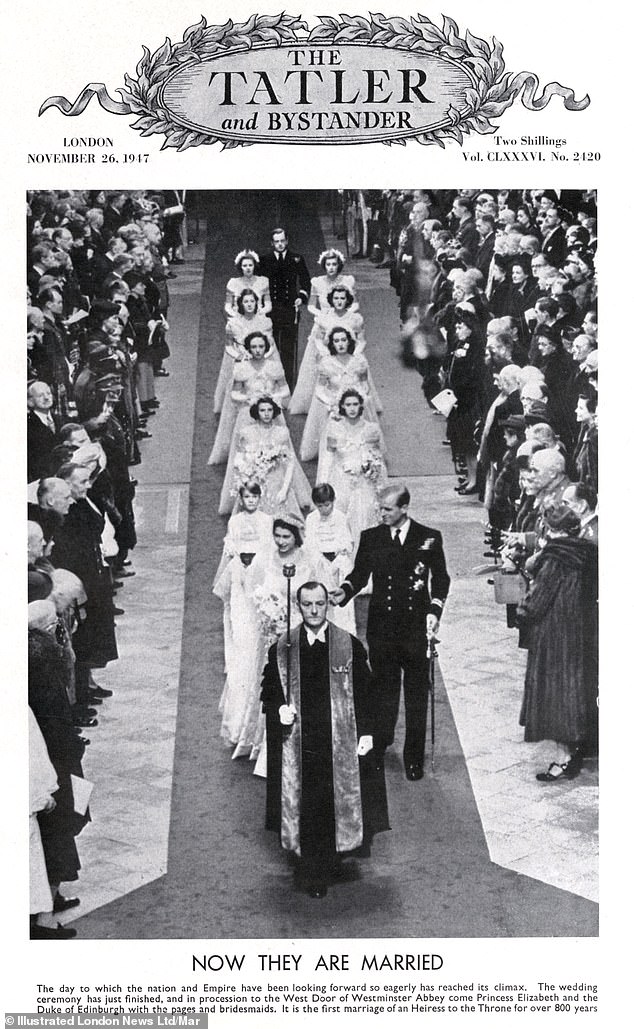 One for the history books: The then Princess Elizabeth and Prince Philip on their wedding day at Westminster Abbey in 1947. Also pictured are the Queen’s bridesmaids and page boys

The most famous bride to grace the cover of Tatler is the Queen, then Princess Elizabeth, who married Prince Philip at Westminster Abbey in 1947.

Tatler did not have a separate shoot with Her Majesty and instead used a photograph taken of the newlyweds in the moments after they exchanged vows.

The ceremony was recorded and broadcast by BBC Radio to 200 million people around the world.

The Queen and the Duke of Edinburgh celebrated their 73rd wedding anniversary in November 2020. Prince Philip died in April 2021, aged 99. 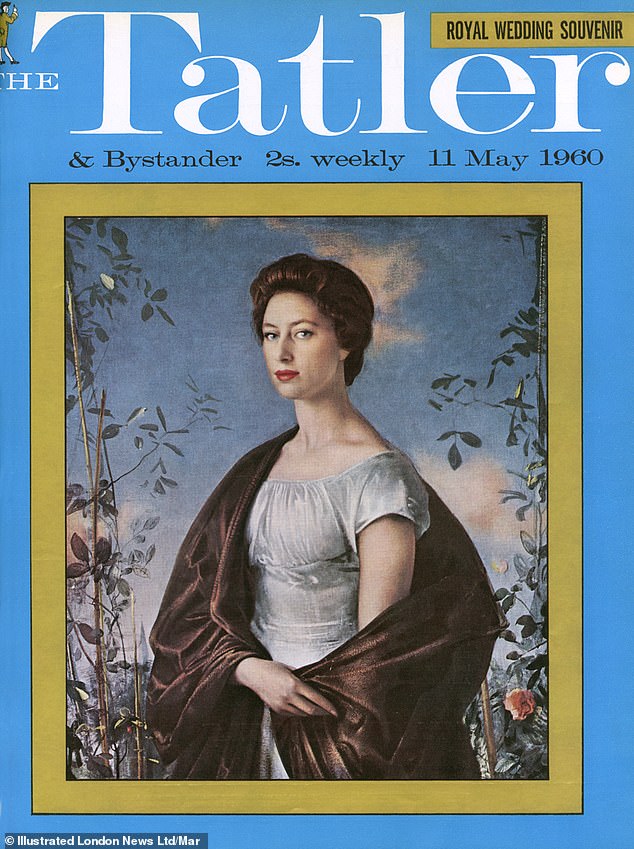 Following in her sister’s footsteps: To mark the wedding of Princess Margaret and Tony Armstrong-Jones, the future Earl of Snowdon, Tatler used a portrait by Pietro Annigoni

To mark the wedding of Princess Margaret and Tony Armstrong-Jones, the future Earl of Snowdon, Tatler used a portrait by Pietro Annigoni, painted for her between 1957 and 1958.

The couple were married at Westminster Abbey. It was the first royal wedding to be broadcast on television with an estimated 300 million viewers.

The glamorous couple were joined by friends, family and visiting dignitaries for the service.

The couple divorced in 1978. It was the first divorce by a senior member of the royal family since that of Princess Victoria Melita of Saxe-Coburg and Gotha and Ernest Louis, Grand Duke of Hesse in 1901.

Lord Snowdon remarried Lucy Lindsay-Hogg in the same year the divorce was finalised. He died in 2017, aged 86. Princess Margaret, who never remarried, died in 2002. 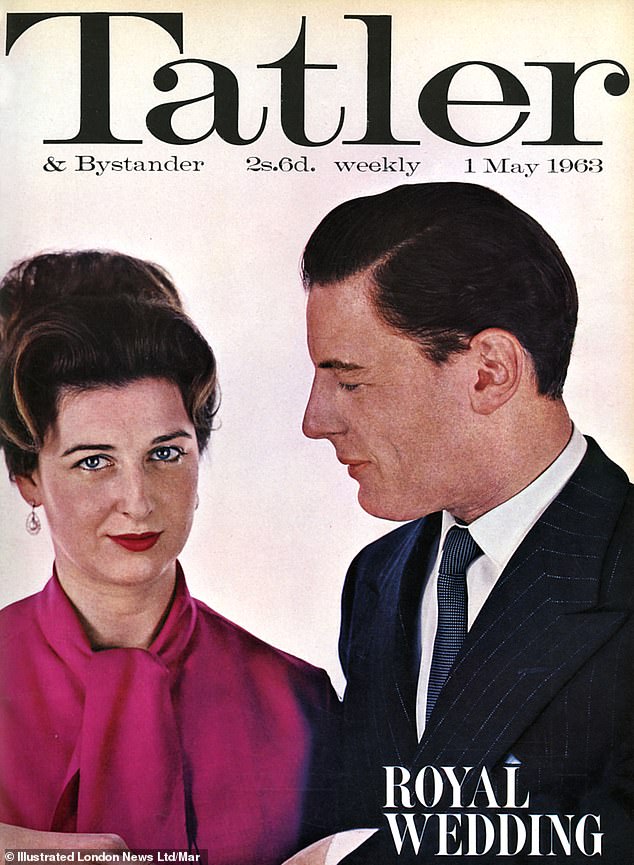 Family tradition: Princess Alexandra of Kent was chosen for the cover of Tatler on her wedding to the Hon. Angus Ogilvy in 1963. Her mother the Duchess of Kent was also a Tatler bride

Following in the footsteps of her mother, the Duchess of Kent, Princess Alexandra of Kent was chosen for the cover of Tatler to mark her wedding to the Hon. Angus Ogilvy in 1963.

Unlike her mother, who had appeared in her wedding gown and tiara, Princess Alexandra was dressed in a pink satin blouse with her hair swept up in an elegant updo.

Angus Ogilvy, whose father was a Lord-in-waiting to George V and Lord Chamberlain to Queen Elizabeth, gazes lovingly at his new bride.

The couple married at Westminster Abbey in a service attended by the royal family and broadcast on television.

Ogilvy was offered an earldom by the Queen but declined. He also turned down the offer of a grace-and-favour apartment, choosing instead to lease Thatched House Lodge in Richmond from the Crown Estate.

Ogilvy died in 2004, aged 76. Princess Alexandra remains a working member of the royal family and continues to live in Thatched House Lodge.