For all the awe Tyrannosaurus rex inspires, the “king of the dinosaurs” wasn’t very speedy.

Paleontologists already knew this predator was slow: It could only reach a maximum speed between 10 and 25 miles per hour. A 2017 study suggests that if a T. rex went any faster than 12 mph, the predator’s bones would have shattered — so it walked quickly to pursue its prey when needed.

But according to a study published Wednesday, T. rexes didn’t like walking fast if they could help it.

The researchers calculated that the dinosaur’s preferred walking speed was a 3-mph stroll.

That’s just under the average preferred walking speed for a human. So you could probably out-walk a T. rex, or at least keep up with one during its evening jaunt.

“Humans and T. rex would not, if the study is right, have had very different walking speeds,” John Hutchinson, an evolutionary biomechanics expert at the Royal Veterinary College in London who was not involved in the research, told Insider.

T. rexes preferred walking at the same speed that elephants do 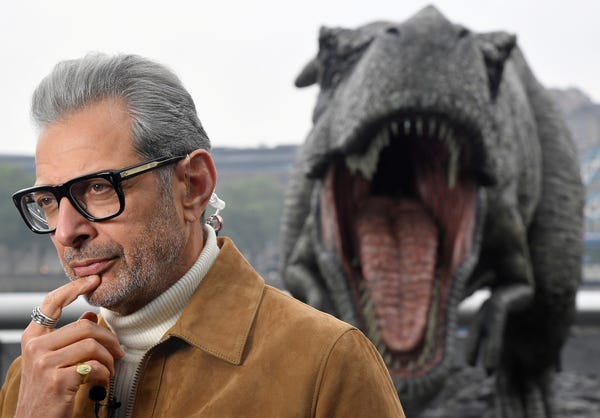 An animal’s preferred walking speed enables it to move about using the least amount of energy possible, according to Pasha van Bijlert, the new study’s co-author.

While it may seem like the slower you walk, the less energy you use, that’s not necessarily the case. The best way to achieve maximum energetic efficiency is by finding a locomotion sweet spot known as resonance.

Imagine you’re swinging on a swing, trying to get it moving by swaying your legs back and forth. If you sway too quickly or too slowly, nothing happens. But undulating at just the right rhythm gets your body parts to resonate, and swing most efficiently.

A similar resonance happens when you’re walking at your preferred speed and your body finds a natural step rhythm.

“Many animals have a roughly similar preferred walking speeds: ostriches, elephants, giraffes, horses, gnus, and gazelles are the animals we’ve found data for, and they’re all not that fast when they don’t have to be,” van Bijlert told Insider. These animals prefer to walk between 2.2 and 3.1 mph, just like T. rex — and just like us. 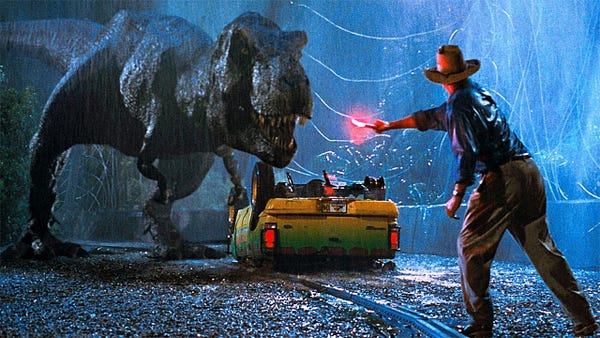 That means the iconic scene from the 1993 film “Jurassic Park,” in which a T. rex chases a group of park visitors driving away, isn’t very accurate.

“I don’t think anybody believes a T. rex could outrun a Jeep, but it sure does make for a good movie,” van Bijlert said.

Researchers previously calculated T. rex’s walking speed by looking at fossilized footprints, then using the distance between those tracks to estimate the length of the dinosaur’s stride. Those earlier estimates suggested T. rex could walk as fast as 6.7 mph.

But instead of focusing on what T. rex’s legs were doing, van Bijlert’s group looked at the predator’s tail. A T. rex’s tail bobs up and down as it walks.

According to the study authors, every time T. rex’s tail sways up, ligaments inside the tail pull its legs backward, and store energy that then gets released when the tail swings back down. That energy propels the dinosaur forward. 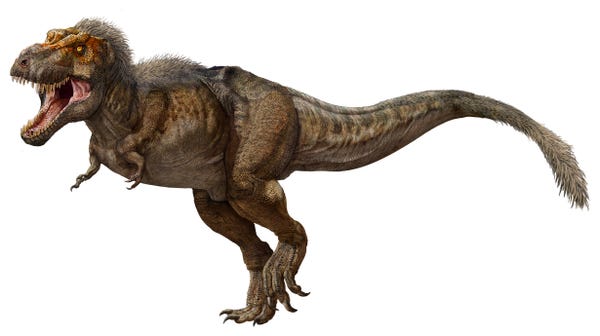 To figure how fast a T. rex tail would move, van Bijlert’s team created a 3D-model of an adult T. rex skeleton named Trix from the Naturalis Biodiversity Center in the Netherlands. The team reconstructed where all of Trix’s muscles and ligaments would start and end between her tail and legs, and used that model to help calculate her preferred walking speed: 2.9 mph.

Hutchinson said there’s some uncertainty around that result, however, because van Bijlert’s group didn’t take into account whether Trix’s tail would also be swinging side-to-side, and whether the muscles driving that motion might impact her top walking speed.

“There’s a big difference between a casual stroll in no rush versus a sprint,” Hutchinson said.

It would take an adult T. rex more than 13 hours of walking to patrol its territory

T. Rex’s preferred walking speed could tell us how long it took for the dinosaur to forage or scout an area, according to van Bijlert.

A new study from paleontologists the University of California, Berkeley suggested a single adult T. rex lived in an area roughly 40 square miles in size. So if a T. Rex went on a stroll to survey every part of its territory, the endeavor could take more than 13 hours. 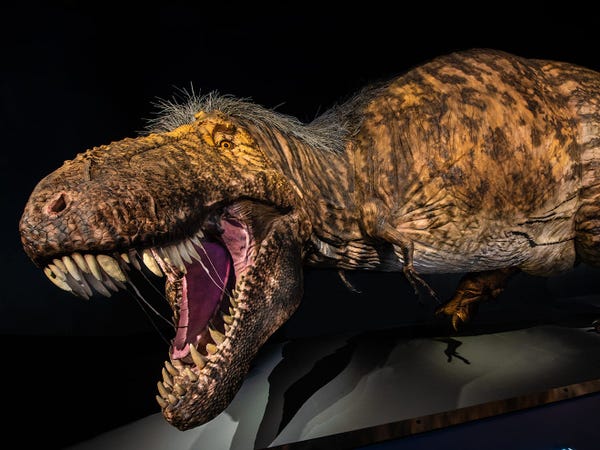 T. rex was still a deadly predator, though, when moving at maximum speed.

A fully-grown T. rex was one of the largest carnivorous land animals that ever walked the Earth, standing about 12 to 13 feet tall at the hip and measuring up to 43 feet from tooth to tail. An adult T. rex could weigh between 5.5 and 9 tons — about the size of an adult African elephant.

T. rexes also had a keen sense of smell, acute vision, and excellent hearing, making it hard for prey to avoid detection. On top of that, their jaws had a bite force of 7,800 pounds, equivalent to the crushing weight of about three Mini Cooper cars. No other known animal could bite with such force.

“All evidence suggests it would have no issues capturing similar-sized prey,” Hutchinson said.