NSW Swifts captain Maddy Proud has been ruled out of Saturday’s clash against the Adelaide Thunderbirds due to a neck injury.

Proud's scratching could prove dire for the Swifts, who are just two losses away from missing out on the finals. The Swifts have lost their past three games and sit fourth on the ladder with two rounds left. 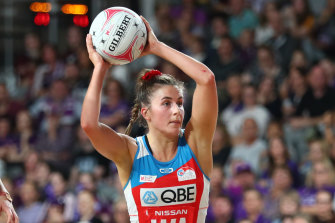 The Swifts will be looking to rebuild some confidence before the finals despite the loss of their skipper Maddy Proud. Credit:Getty

Coach Briony Akle said she made the decision to err on the side of caution after Proud suffered a knock at training earlier in the week.

“Being our leader, Maddy is at the heart and soul of everything we do, but sometimes you need to look to the longer-term,” she said. "We've got players who can step in and do a job for us and Paige Hadley is one of the best in the world in the midcourt, so we won't lack leadership out there.”

The Swifts face the Thunderbirds on Saturday before taking on the fifth-placed Giants a week later.

If the Swifts lose twice, and the Giants manage two wins, they will overtake them on the ladder and head to the finals instead.

The game has come a little too soon for Maddy to be fully right.

“Adelaide will be very tough opponents, who’ll want to finish their season with a flourish, but the game has come a little too soon for Maddy to be fully right," Akle said. “Next week is another big one against the Giants so we’re looking forward to getting her right for that.”

The Giants face the West Coast Fever in Cairns at 1pm for this week's Indigenous Round. The Swifts take on Adelaide at 3pm.

“We are in one of the most beautiful parts of Australia for Indigenous Round and there is no better stage to start evening the ledger back in our favour," Akle said.

The Swifts will look to rebuild some confidence before heading into the finals series despite the loss of their skipper.

“I think coming to the end of three games, a week we were starting to look and feel very tired, so the extra time between games has been vital,” Akle said. “It’s given the players and coaches good time to reflect and ask some hard questions of ourselves as we head into the biggest week of our season so far.

“They are proven champions but that doesn’t count this year as you have to prove yourself all over again."