Some of the $5 million allocated by the Australia Council to an emergency fund for struggling arts companies and workers will be directed towards the making of art, as well as patching losses incurred during the COVID-19 health crisis.

Adding detail to its first "response package" announced last week, Australia Council said it had created a Resilience Fund, from which small grants could be quickly made to save organisations, tide them over or help create new works for a nation in virtual lockdown. 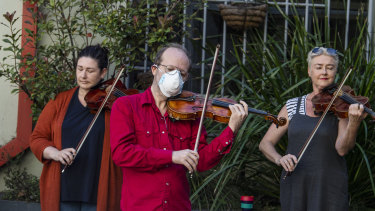 The move comes as small to medium-sized arts companies nervously await news of their success or failure to secure long-term funding.

A total of 162 companies across Australia were invited last August to apply for grants to fund their operations and activities from January 2021 to December 2024.

Peak industry bodies were informed by Australia Council at a weekly roundtable meeting on Tuesday that an announcement around the fate of the $100 million-plus funding pool was imminent.

However, it is understood that with funding not due to kick in until early next year the federal government is unlikely to sign off on any commitments until it sees the full effect of the wage subsidy and other stimulus measures that are expected to help the sector.

A spokesperson for Australia Council said multi-year funding was proceeding but hinted funds would be spread thinner but wider.

"We have been working on changes to our Four Year Funding 2021-2024 program to support the greatest number of small to medium arts organisations in these difficult times," she said. "We will confirm the timing of the announcement in the near future."

National Association for the Visual Arts executive director Esther Anatolitis said any delay would come at the cost of industry confidence at the most sensitive time the industry has ever known.

The latest funding grants and restoration of the suspended Arts and Disability Mentoring Initiative were important and helpful, she said.

''There's a good balance of urgency and care, as well as making funds available for artists to just make art – something all of Australia desperately needs right now.

"These, of course, are small and piecemeal measures that don't in any way replace the need for stimulus called for by the entire industry.

"Without that, companies will fold and livelihoods will end in the month it takes for the wage subsidy and cashflow stimulus measures to kick in. That urgency needs to be addressed now."