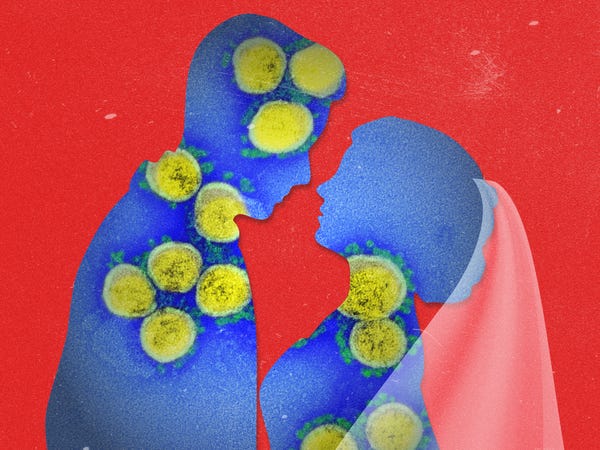 She knew there would be a risk of contracting the coronavirus if she attended, but she didn't feel like she could miss it. She knew the couple had been planning their wedding for years.

She and her partner decided to go, despite these fears. But they soon proved prescient. Between 50 and 100 guests attended the July event in the Midwestern US, but Mary said only a handful of guests wore masks. She had a panic attack during the reception due to the lack of protection, which added guilt to the already-sizable cocktail of feelings she had about the wedding.

"I think there was a pressure to perform. Nobody wants to be that person at any social event that's sitting in the corner," Mary told Insider. (Mary didn't want to use her and the bride's real names, or disclose where the wedding took place, because she was concerned about how the bride would react if she found out about this story.)

Her fears became a reality a few days later, when she and her partner heard whispers that someone who attended the wedding was displaying symptoms of COVID-19, the disease caused by the coronavirus. They decided to get tested because they had been in contact with the person.

They both tested positive.

Just a few months ago, wedding season looked like it would be put on hold

In the spring, it seemed like the pandemic would bring wedding season to a screeching halt. Widespread fear and anxiety about the virus, as well as state mandates regarding large gatherings, made big celebrations feel like a relic from the Before Times.

Yet as the months have passed, engaged couples have found ways to hold their big weddings, despite the continued spread of the virus across the US. The Knot defines a wedding with fewer than 50 guests as a "microwedding," but a gathering of that size is still large by public health standards in many states.

New York, which has brought its positive test rate down to less than 1% after being the epicenter of the pandemic, has banned gatherings of more than 50 people, even at outdoor events. Connecticut limits indoor gatherings to 25 people, as does New Jersey.

Some couples have bucked health guidelines altogether to turn their dream weddings into reality, even as states from coast to coast see dangerous case spikes. In late August, an outbreak from a 65-person wedding in Maine was linked to 87 cases and one death, and another recent wedding in Brooklyn, New York was linked to 16 cases.

Whether a couple wants to offset the cost of losing a deposit, doesn't want to delay for a year or two, or simply wants to celebrate with family and friends, these gatherings ignore the ever-present danger — and ubiquity — of the virus, and put guests, staff, and anyone they come into contact with at risk. A celebration can easily turn into a disaster, and there's no way to prevent it.

Despite global efforts, we're likely still at least a year away from access to a safe vaccine, according to Dr. Amesh Adalja, a Senior Scholar at the Johns Hopkins University Center for Health Security.

Even after a vaccine is proven to be safe and effective, it will be a difficult, red tape-laden process as officials figure out how to distribute it and who will be first in line — particularly since the virus has become a political issue, Adalja added.

Adalja told Insider that it's best to approach any event with a mindset of "harm reduction" for the next year, because there's no way to entirely eliminate the risk of spreading the virus. Weddings, he said, are particularly risky.

People often travel to weddings, giving them the opportunity to bring the virus with them from a hotspot. Guests with mild symptoms might attend despite feeling under the weather because they don't want to miss out on the milestone. And infected asymptomatic guests could expose everyone they come in contact with without even realizing it.

Likewise, elderly and immunocompromised guests might feel like they have to attend. After all, how can they miss out on something that feels like a once-in-a-lifetime event? The engaged couple can tell those guests they don't have to attend, but forcing an elderly person, for example, to choose between risking their life and missing their grandchild's wedding puts them in a terrible position.

Other guests might not want to social distance or wear masks, as neither practice feels celebratory. Those who try might find themselves slipping after a few drinks. It's easy to imagine: you pull your mask off to pose for a photo with a friend, and then forget to put it back on as you head to the dance floor.

Weddings are also extremely difficult to contact trace, since people scatter to different regions after the event. "It's very hard when you have an exposure at a mass gathering for contact tracing to be effective, because the person was at a wedding with 400 people, they may have so many contacts," Adalja said.

Engaged couples are putting the burden of safety on their guests

A wedding is more than just a party. It's a social rite of passage, and its significance makes simply choosing not to attend feel like an unrealistic option. By going forward with the event, engaged couples are putting the burden of safety on their guests.

Amelia traveled to a wedding in the Southeast US in July, which had already been rescheduled due to the virus. (Like Mary, Amelia didn't want to use her real name or share the location of the wedding in case the couple found out about this piece.)

She was concerned about exposure to the virus at the 100-person event, but as a bridesmaid, she didn't feel like she could miss her friend's big day. Though she had antibodies, she was still worried about the possibility of reinfection.

"It felt like peer pressure from the other bridesmaids, too," she told Insider. Members of the bridal party reminded her how difficult postponing had been for the bride, and made her feel as though she would be insulting her friend if she didn't come.

She and her partner decided to attend the wedding despite their concerns, taking comfort in the fact that masks would be encouraged at the event and that it was an indoor/outdoor venue. But those comforts proved fruitless once they were there.

"They had masks and had hand sanitizer everywhere, but I just feel like no one was wearing the masks," with the exception of a few older guests, she said. Likewise, most of the guests decided to stay inside throughout the day because it was hot outside.

The bride and groom didn't wear masks at all during the day, which didn't do much to encourage other guests to don them. At one point, Amelia even saw a groomsman passing around a bottle of alcohol for the bridal party to drink communally.

"I just thought that there would be a stricter safety policy when I agreed," she said.

It's thorny to assign blame if someone contracts the coronavirus after attending a wedding. Is it the couple's fault because they're the reason people gathered in one place? Is it the fault of the guest who brought the virus, even if they were asymptomatic? Or is it the government to blame for making it legal for people to gather?

The answer is probably a combination of all three. But at the end of the day, a couple who willingly hosts a large wedding during the pandemic is sending the message that their day is worth risking their loved ones' lives over.

They can take steps to make the wedding safer, but there's no way to get the risk of spreading the virus down to zero.

If you absolutely have to have a small wedding during the pandemic, there are ways to mitigate risk. Above all, the smaller the better. As Adalja told Insider, "The bigger the event is the more likely you're going to have somebody there that's harboring the virus."

Simply Eloped, an elopement planning company that offers services in 15 states and Washington DC, is currently limiting its events to 16 guests. The couple and two vendors would also be at the event, so only 20 people maximum are at any of their weddings.

Couples can trim their guest list so only the most important people in their life attend the wedding in person. (For the rest, there's always Zoom.) Although it might be intimidating to think about uninviting guests, there are ways to do it politely.

"Leaving your guests in limbo is not good because they have their own lives and they have their own schedules to make," she said. You can inform them via mail, email, or phone call, but it's important to ensure they've received the notice so they don't show up at your wedding unexpectedly.

Drye also recommended making the safety of guests and the wedding staff the focus of the conversation, as people's feelings will be less likely to be hurt if it's clear you're worried about them.

At the event itself, implementing safety measures like mandatory mask-wearing, social distancing, and easily accessible hand sanitizer can help keep guests and staff safe. Holding it outdoors is also better than indoors.

Micaela Karina, a wedding photographer based in the UK, told Insider she only works weddings where she feels safe. She's photographed two weddings over the summer; the other 12 were postponed.

"At both weddings I've shot, the couples dramatically reduced their guest lists — at one, I was even a witness and the photographer," she said. There was hand sanitizer and social distancing at both events, and she wore her mask the entire time.

Karina said she won't work a wedding that isn't adhering to government guidelines during the pandemic, even if that means she loses money. "I would be prepared to reduce their package costs to maintain the safety of my household," she told Insider. "While I might be losing money, money is replaceable. Lives are not."